I measured the Meze Audio Liric headphones using laboratory-grade equipment: a GRAS Model 43AG ear/cheek simulator/RA0402 ear simulator with KB5000/KB5001 simulated pinnae, and an Audiomatica Clio 12 QC audio analyzer. For isolation measurements, I used a laptop computer running TrueRTA software with an M-Audio MobilePre USB audio interface. For most measurements, the headphones were amplified using a Musical Fidelity V-CAN amplifier; I used a Schiit Magnius amplifier for distortion measurements. These are “flat” measurements; no diffuse-field or free-field compensation curve was employed. If you’d like to learn more about what our measurements mean, click here. 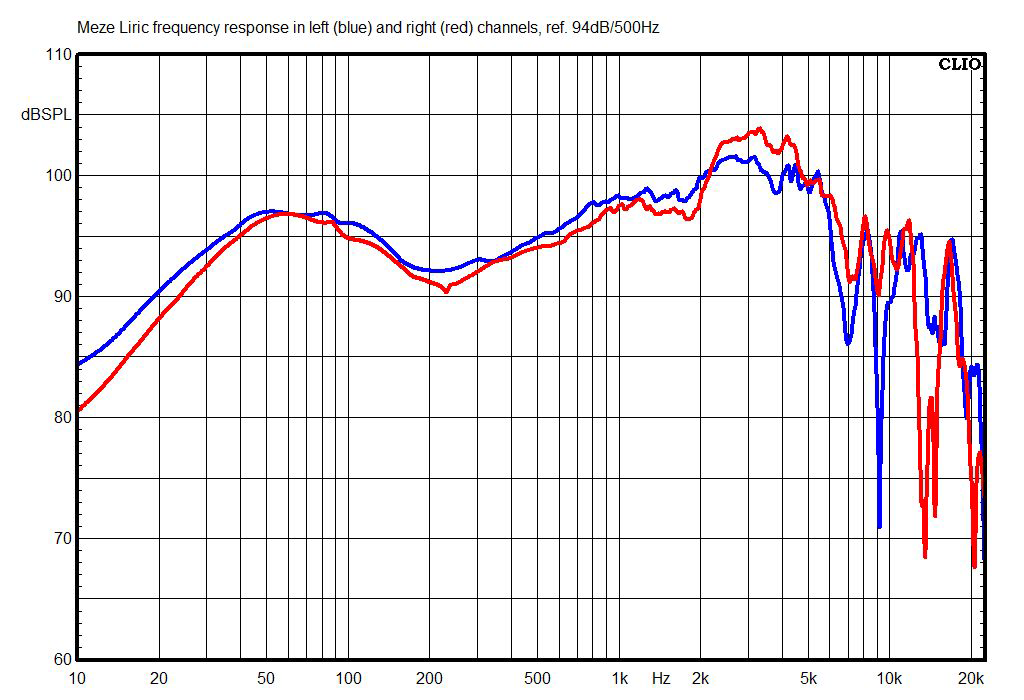 This chart shows the Lirics’ frequency response. Looks pretty normal, with maybe a little more midrange than usual, and with a little less bass than usual. 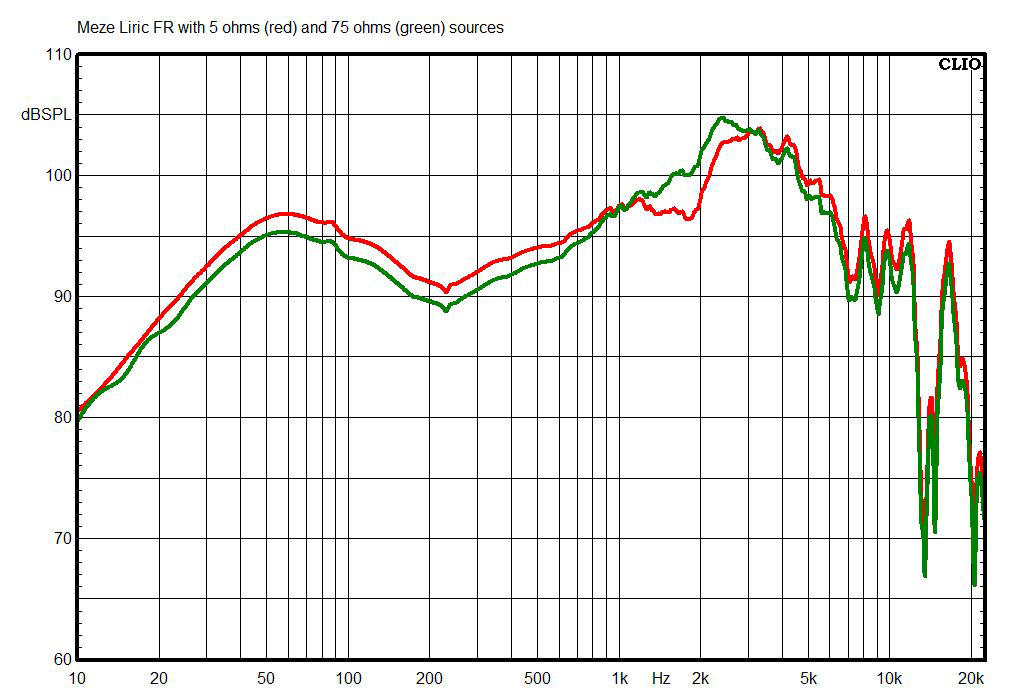 Here we can see the difference in the headphones’ response when a high-impedance (75 ohms) source is substituted for a typical low-impedance source (5 ohms). Normally with planar-magnetic headphones, the difference is at most 0.5dB, usually in the bass. But here the difference is substantial—a drop of about 1.5dB in the bass and lower midrange, and a boost of 1 to 3dB in the upper midrange, between 1.2 and 2.8kHz. So these headphones will sound noticeably brighter when used with high-impedance source devices, like some older (and even a few newer) solid-state amps, some pro amps, and many tube amps. 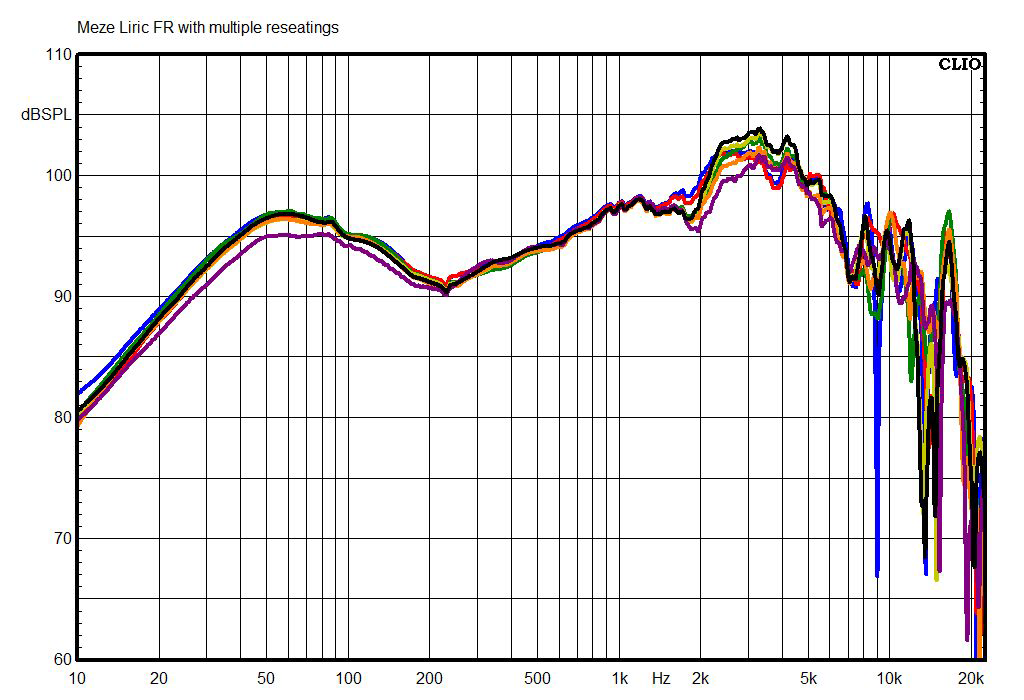 This measurement shows how sensitive the headphones’ response is to their position on the ears. The black line shows the curve I used above. Normally I pick a curve that’s somewhere in the middle, but it’s pretty clear that the one with the most treble response is “right.” Notice how the treble response falls a few dB when I moved the headphones off their optimal position? This indicates that the quasi-two-way design of the Rinaro diaphragm really works—although it also suggests that you should move the headphones around slightly when you put them on to make sure you’re getting optimal treble response. 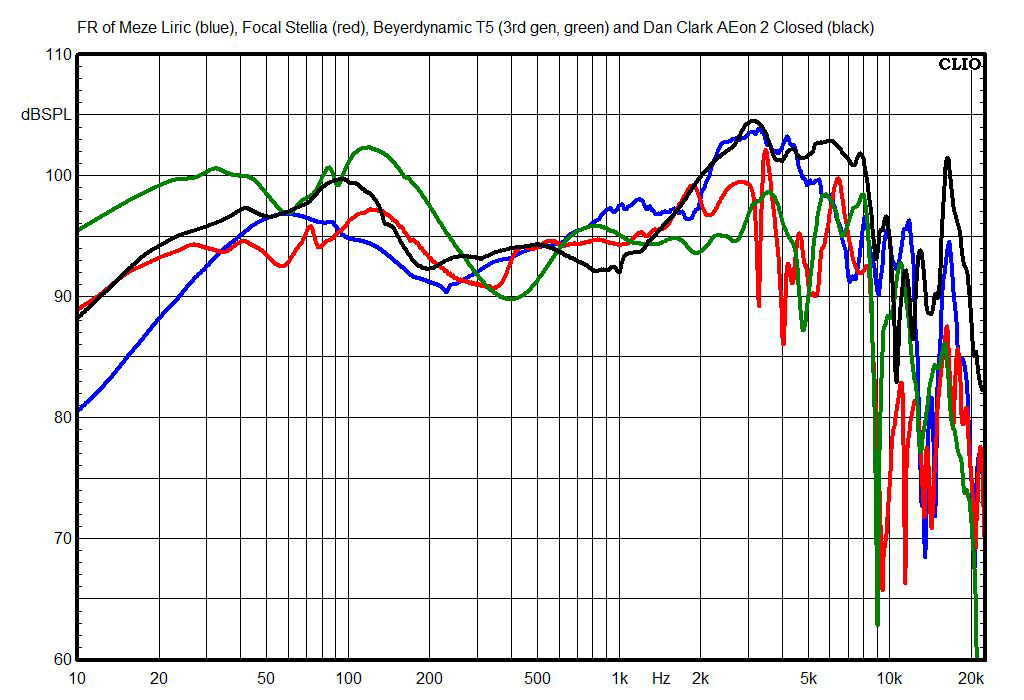 This chart shows the Lirics’ right-channel response compared with a few other open-back models (including the Dan Clark Audio Æon 2s with perfed pads, which are the planar-magnetic headphones I’ve found come closest to the Harman curve). The Lirics are well in the ballpark of normal, with a little more midrange energy and a little less bass than Harman-curve headphones. 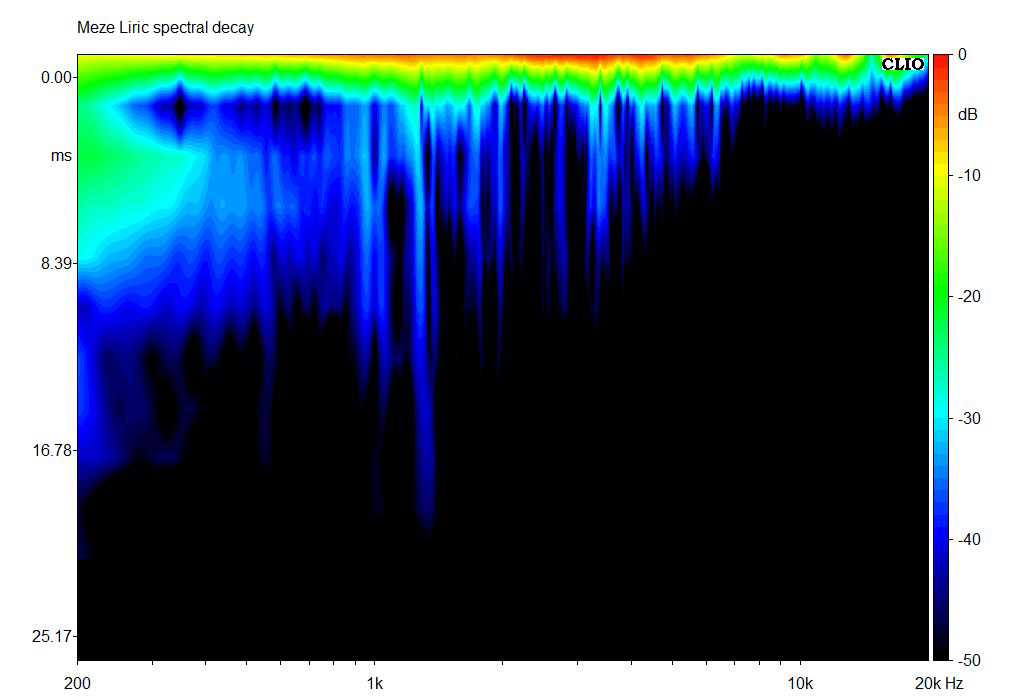 The spectral-decay (waterfall) response of the Lirics is very interesting. All those very-high-Q resonances you see are typical of open-back headphones, especially planar magnetics; I think it’s part of what gives them a more spacious sound. But here, the resonances cover a much broader part of the audio spectrum than usual, and are lower in magnitude than usual. Something interesting is going on here—maybe it’s that Phase-X thing at work. 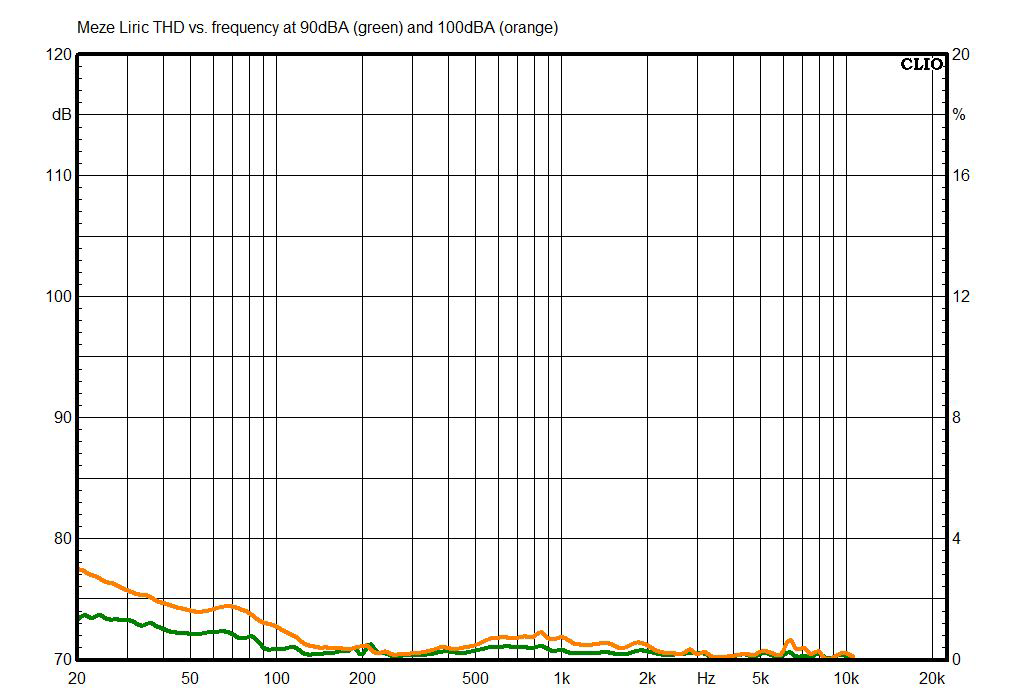 This chart shows the total harmonic distortion, measured at 90dBA and 100dBA (both levels set with pink noise). The distortion is low—not the near-zero distortion I’ve measured with many planar-magnetic headphones, but it should be well below audible levels for headphones. 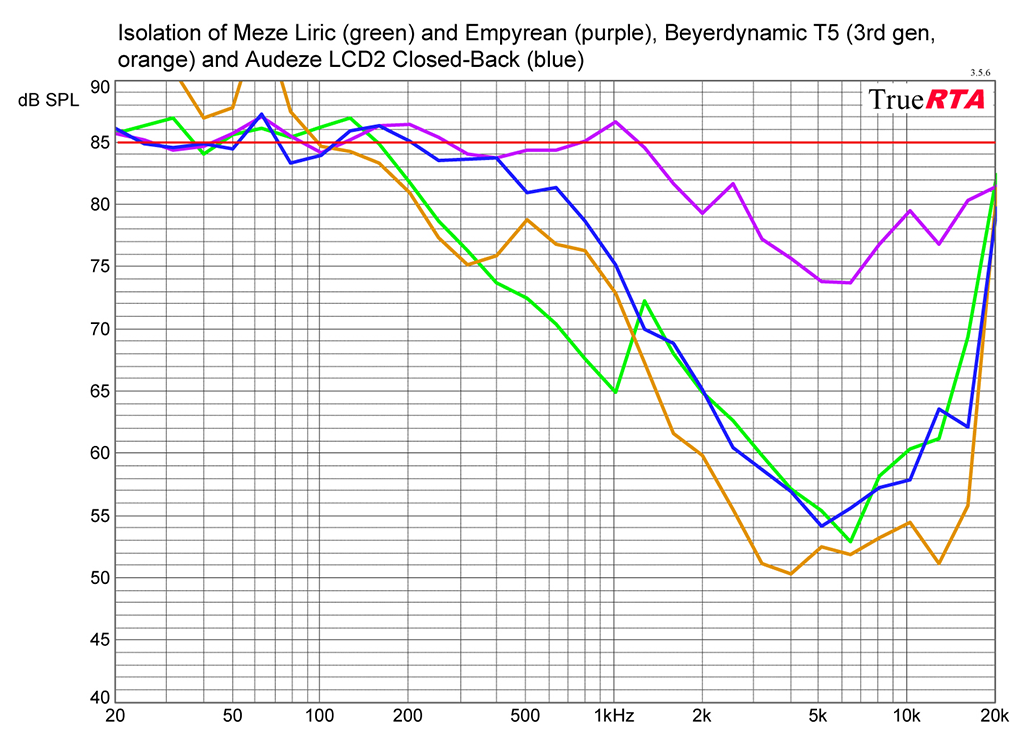 In this chart, the external noise level is 85dB SPL (the red trace), and numbers below that indicate the degree of attenuation of outside sounds. The lower the lines, the better the isolation. The Lirics’ isolation is typical for headphones in this class, although a little better than most below 1kHz. 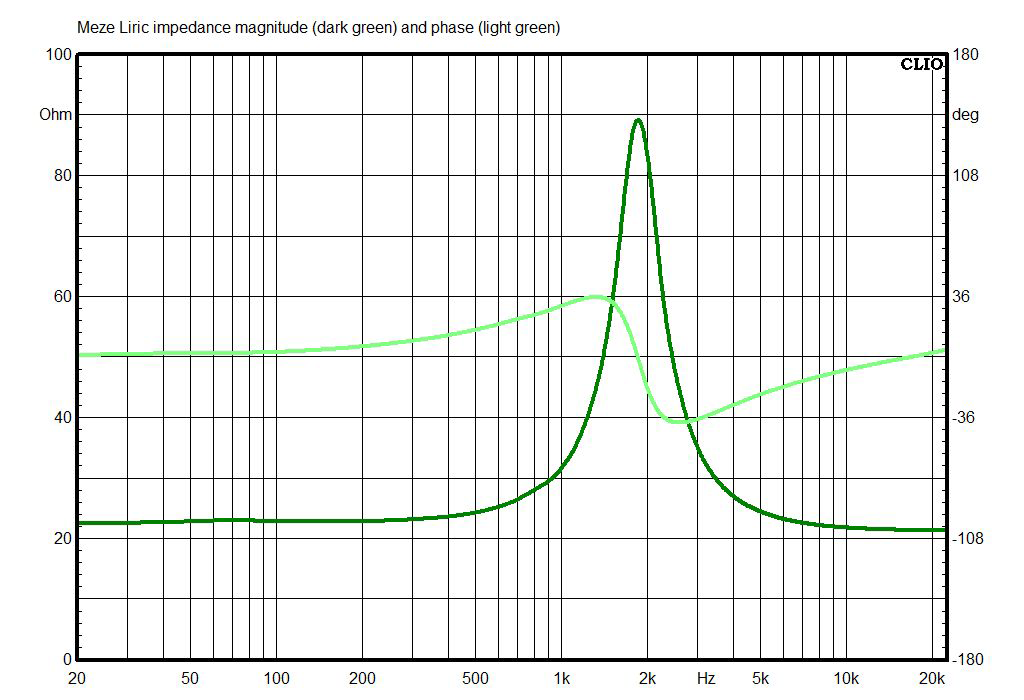 Most planar-magnetic headphones have a dead-flat impedance curve, or close to it. Not these. The impedance is generally flat, at about 22 ohms, through most of the audio range, but there’s a huge peak up to 89 ohms at 1.9kHz, with an accompanying phase swing, too—confirming that these headphones’ sound will be unusually sensitive to the output impedance of the source device.

Sensitivity of the Lirics, calculated for 30 ohms rated impedance and averaged from 300Hz to 3kHz, is 95.9dB, so you’ll need something with a few dB more oomph than a smartphone or tablet to get good performance from them.

Bottom line: Other than that funky impedance curve, and the resulting tonal balance shift with high-impedance sources, the Lirics are well within the range of normal for high-end, closed-back headphones.