I measured the Mark Levinson N⁰ 5909 headphones using laboratory-grade equipment: a GRAS Model 43AG ear/cheek simulator/RA0402 ear simulator with KB5000/KB5001 simulated pinnae, and an Audiomatica Clio 12 QC audio analyzer. For isolation measurements, I used a laptop computer running TrueRTA software with an M-Audio MobilePre USB audio interface. I used a Reiyin WT-04 USB Bluetooth transmitter for Bluetooth measurements, but did most of the measurements with the supplied 3.5mm-to-USB-C cable. These are “flat” measurements; no diffuse-field or free-field compensation curve was employed. If you’d like to learn more about what our measurements mean, click here. 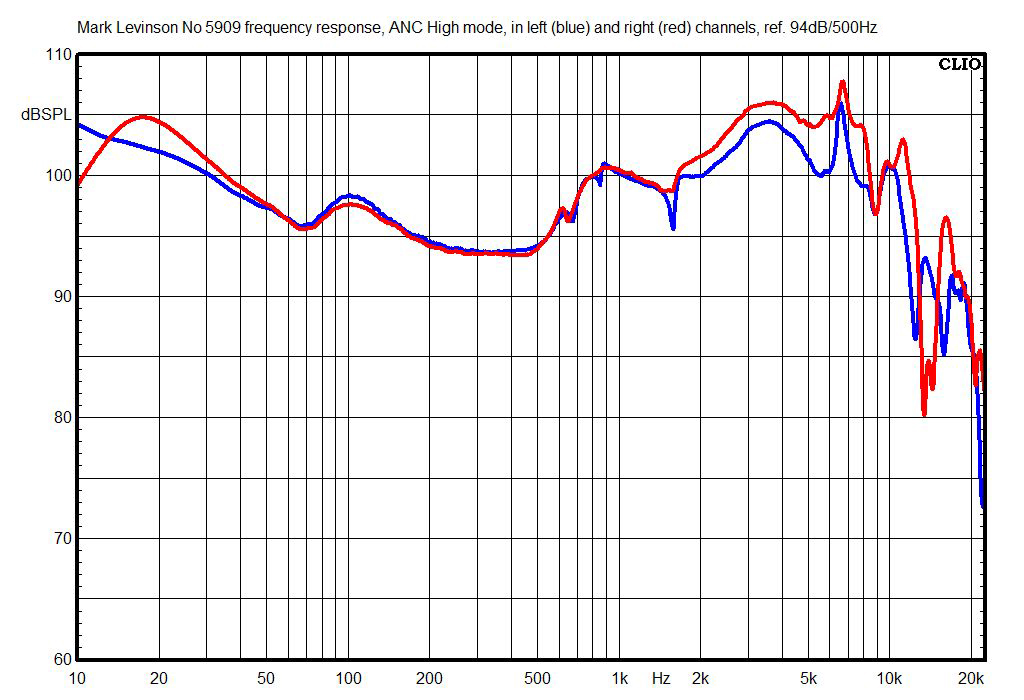 This chart shows the N⁰ 5909s’ frequency response, measured using the cabled connection with ANC set to High. (Measurements made using Bluetooth were very similar.) There are some interesting things going on here. First is a few dB more treble energy than I expected from a Harman curve headphone, stretching out over a broad band from about 3 to 12kHz. Second is less bass than I expected, with a resonant peak centered very low, at about 18Hz, where it will have a fairly negligible effect. Most unusual is the boost in the mids, from about 600Hz to 1.5kHz. It showed up consistently with ANC on, no matter how I did the measurements. A boost in this region is unusual, and not part of the Harman curve. 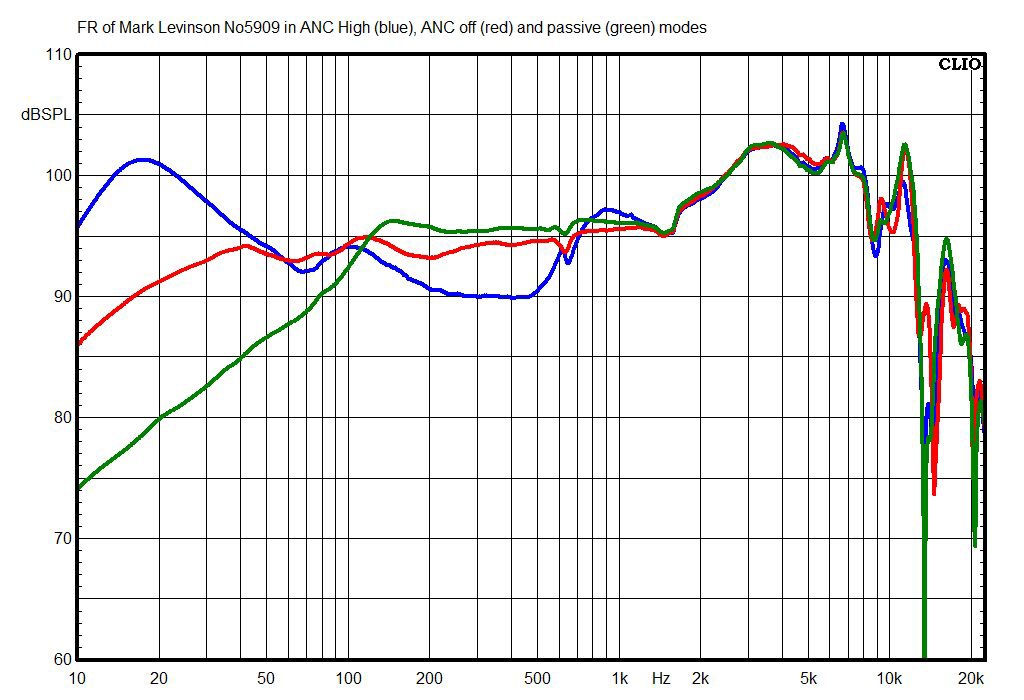 Here we can see the difference in the headphones’ response in three of the available modes: ANC off, ANC High, and passive (cabled, power off). Notice how the bass response diminishes a bit with ANC off, and a lot in passive mode (neither is an uncommon result), and how that midrange bump (or lower-midrange dip, depending on how you look at it) disappears, too. 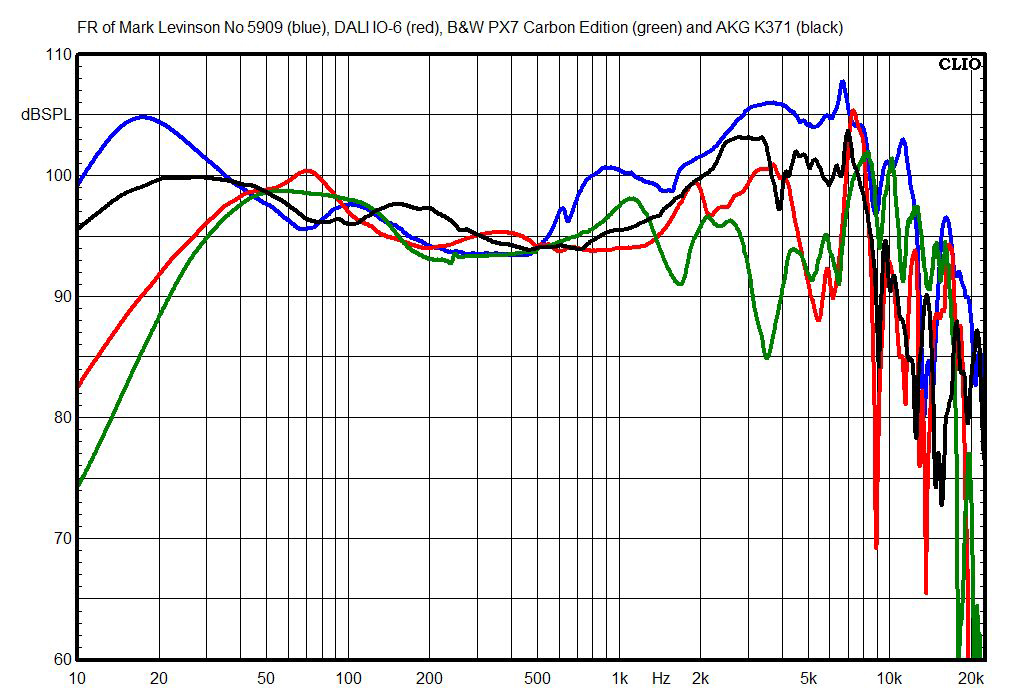 This chart shows the N⁰ 5909s’ right-channel response in ANC High mode, compared with a couple of other high-end noise-canceling models (Bowers & Wilkins PX7 Carbon Edition and DALI IO-6 headphones) and the AKG K371s, which are—or were?—said to be very close to Harman curve. Obviously the N⁰ 5909s have a lot of treble energy relative to all the other headphones—even the K371s, which in theory should measure about the same as the N⁰ 5909s, right? Having put in countless hours using the K371s for recreational listening and audio production; having mixed a CD going back and forth between the AKG K371s and my JBL 305P MkII studio monitors (also designed in accordance with Harman guidelines); and having heard reaction from another very experienced reviewer who likes the K371s but thinks the N⁰ 5909s sound too bright, I have to say—I have a hard time seeing the N⁰ 5909s as a particularly faithful representation of the Harman curve. 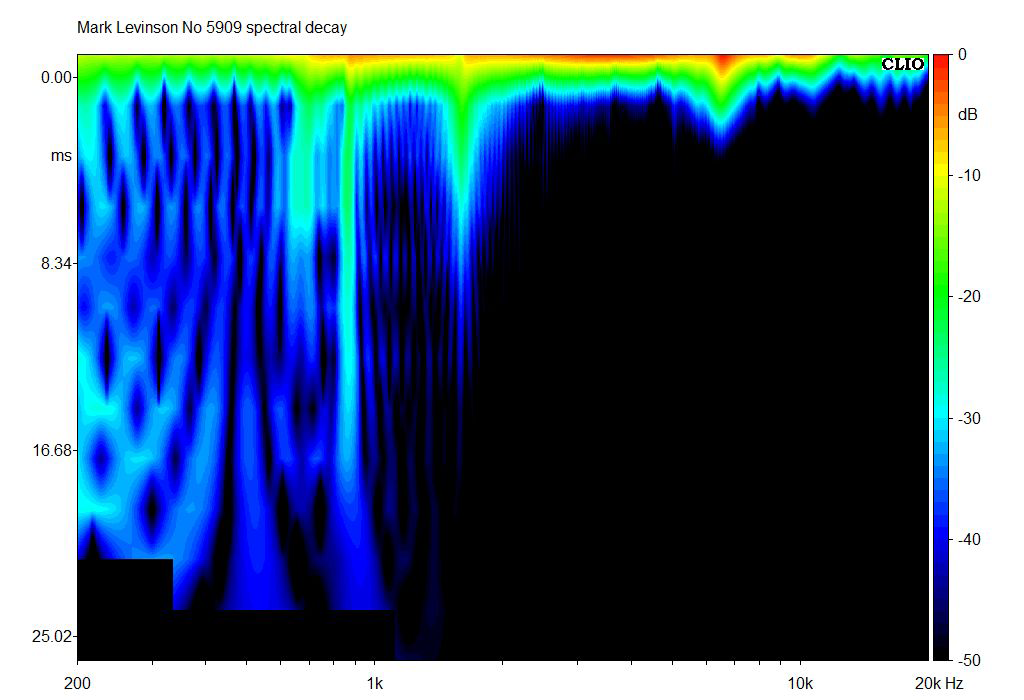 The N⁰ 5909s’ right-channel spectral-decay plot looks pretty clean. Those resonances at about 600 and 800Hz and 1.5kHz are unusual, but they’re fairly high-Q so I doubt they’d be readily audible. 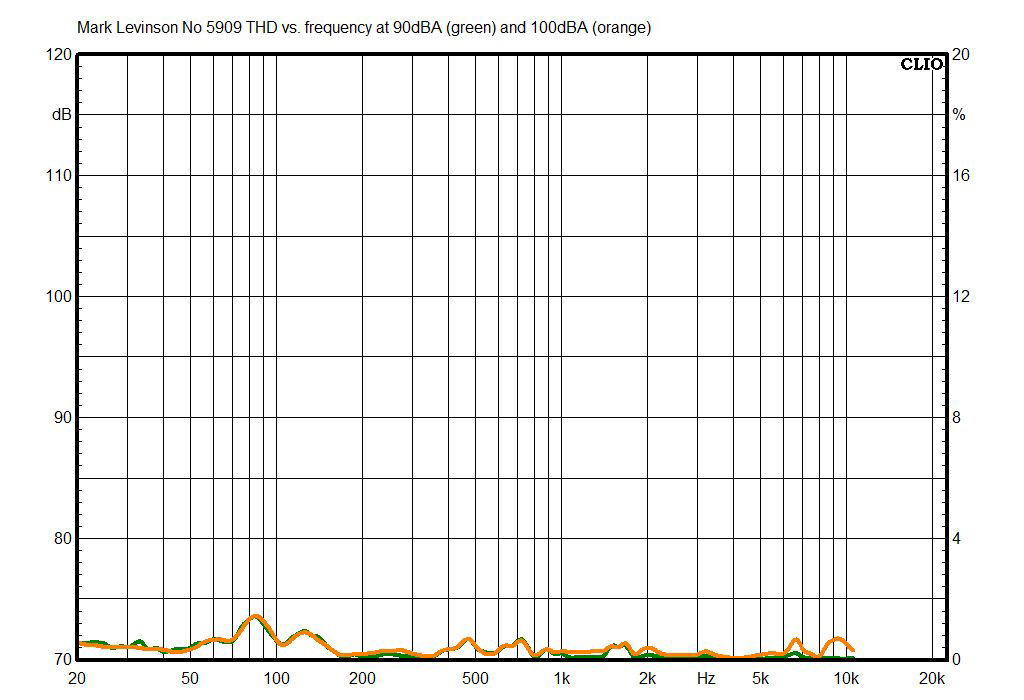 Here’s the THD vs. frequency chart, measured at 90dBA and 100dBA (both levels set with pink noise). There’s no audible distortion here. 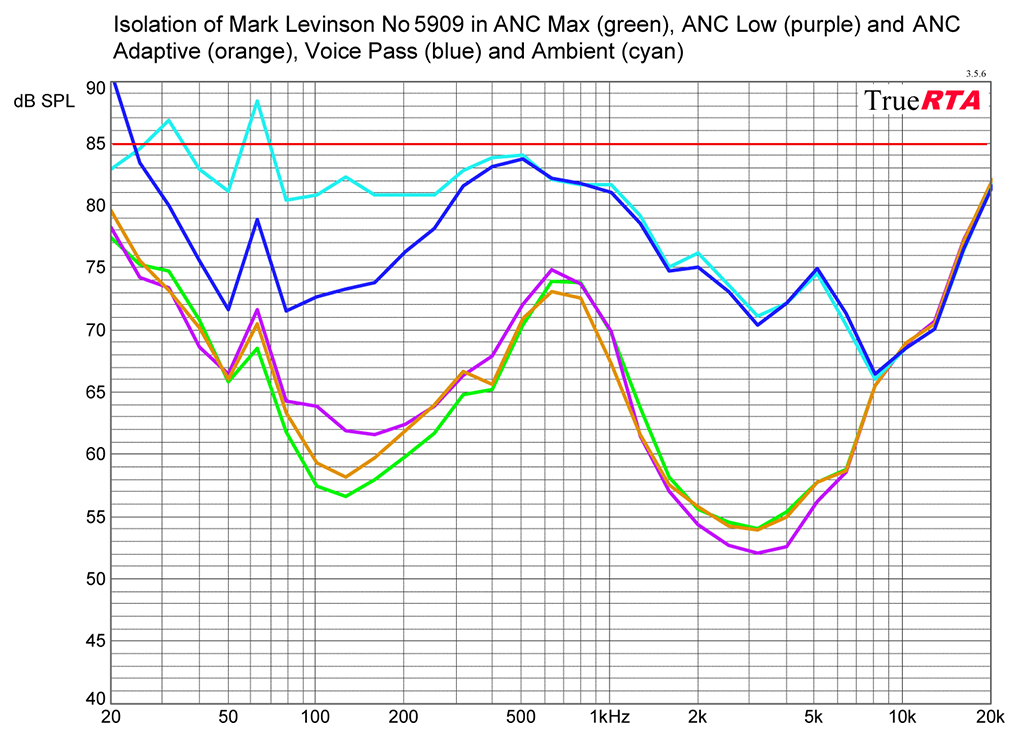 In this chart, the external noise level is 85dB SPL (the red trace), and numbers below that indicate the degree of attenuation of outside sounds. The lower the lines, the better the isolation. You can see that the N⁰ 5909s’ noise canceling isn’t quite up there with the Apple AirPods Max headphones, but it’s competitive with the Bose NC700s (which, by the way, measure almost exactly the same on this test as the Bose QC45s do), and worlds better than the DALI and Bowers & Wilkins models also included on this chart. I hope Harman’s accomplishments in this area will inspire its fellow high-end competitors to put a little more effort into their noise-canceling technology. 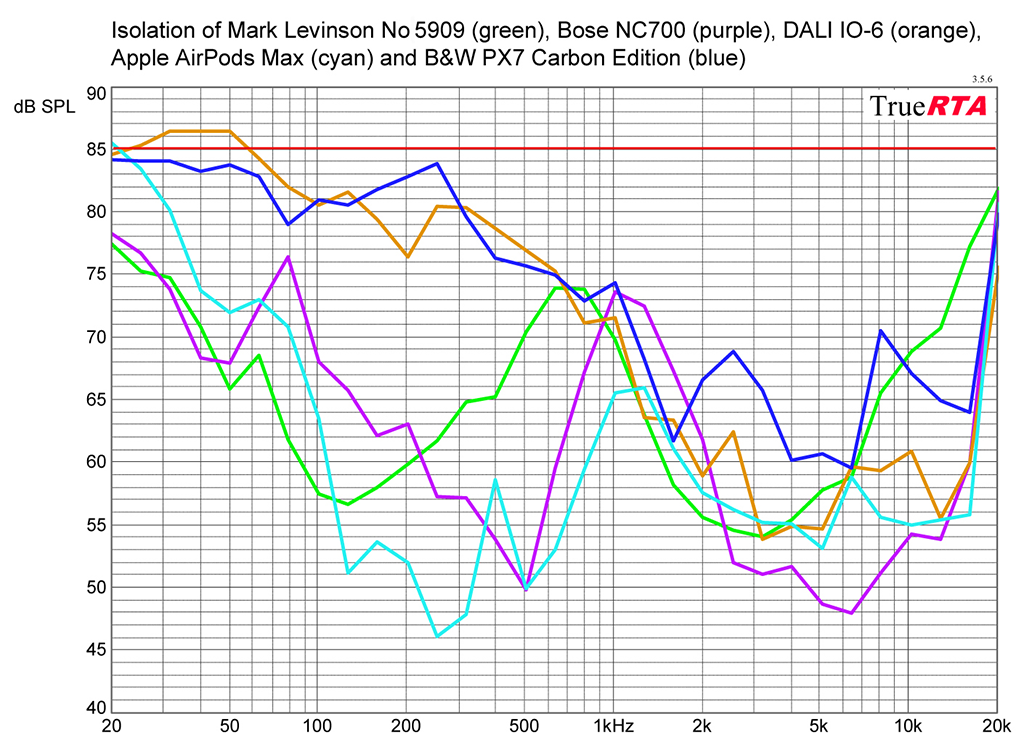 This chart shows the effects of all the different noise-canceling and ambience/transparency modes included in the N⁰ 5909s. 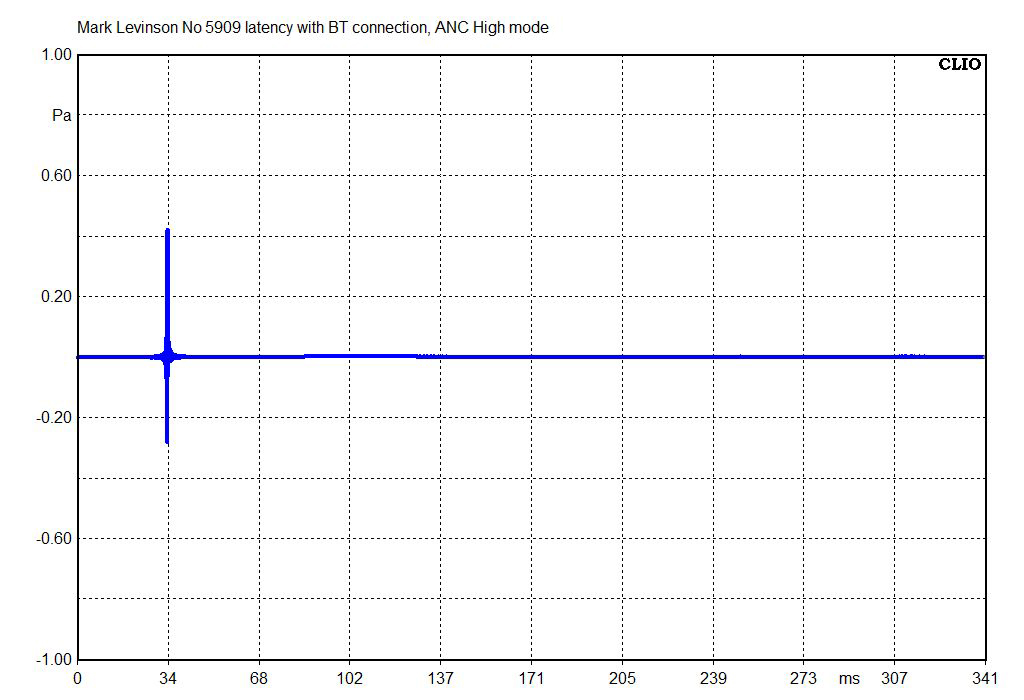 Connected to the Reiyin WT-04 USB transmitter (which has aptX Low Latency), the N⁰ 5909s average about 33ms latency, low enough that it won’t cause lip-sync problems when you’re watching videos.