I measured the Soundcore Frames using laboratory-grade equipment: a GRAS Model 43AG ear/cheek simulator/RA0402 ear simulator with KB5000/KB5001 simulated pinnae, an Audiomatica Clio 12 QC audio analyzer, and a laptop computer running TrueRTA software with an M-Audio MobilePre USB audio interface. I placed the Frames on the ear/cheek simulator in the same position they’d be in when used on an actual human ear. Note that because this product is physically much different from headphones or earphones, these measurements, for the most part, cannot be directly compared with our usual headphone measurements. In fact, due to the Bluetooth connection and the unusual configuration of the product, some of our usual measurements (including spectral decay and isolation) were impractical or pointless to perform. If you’d like to learn more about what our measurements mean, click here. 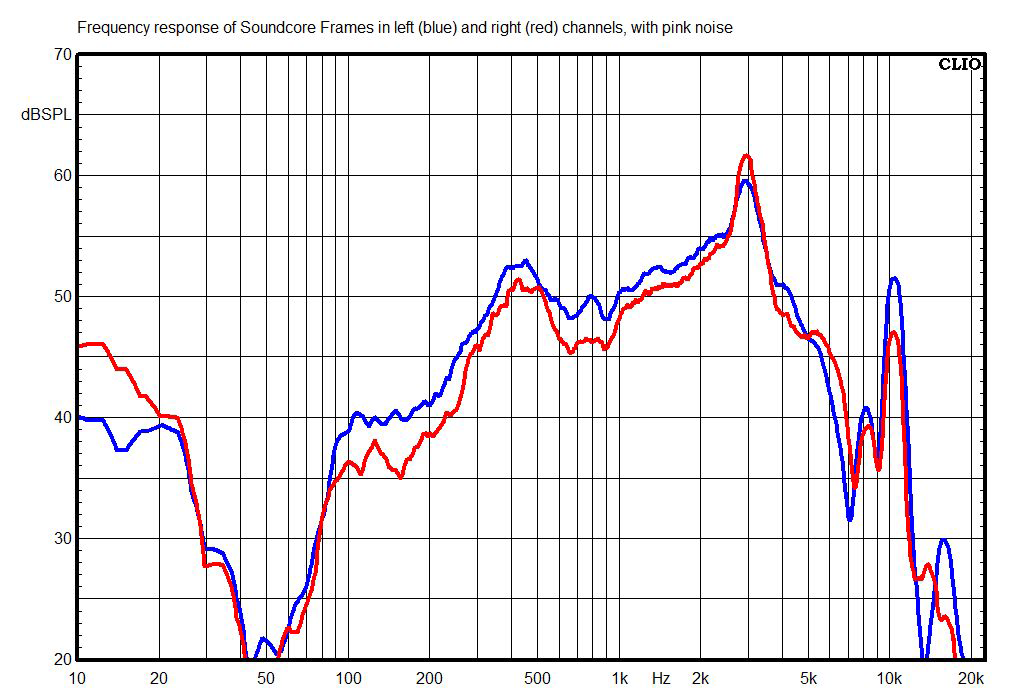 This chart shows the Frames’ frequency response, measured with pink noise. At first glance, this doesn’t look good. But after measuring the Frames’ response with two different real-time analyzers and with a sine sweep on the Clio 12 QC, and seeing similar results, it dawned on me that comparing this product’s frequency response with that of headphones or earphones does not reflect its performance, as the Frames do not interact with the pinnae in the same fashion. Acoustically, they work more like speakers, which is why . . . 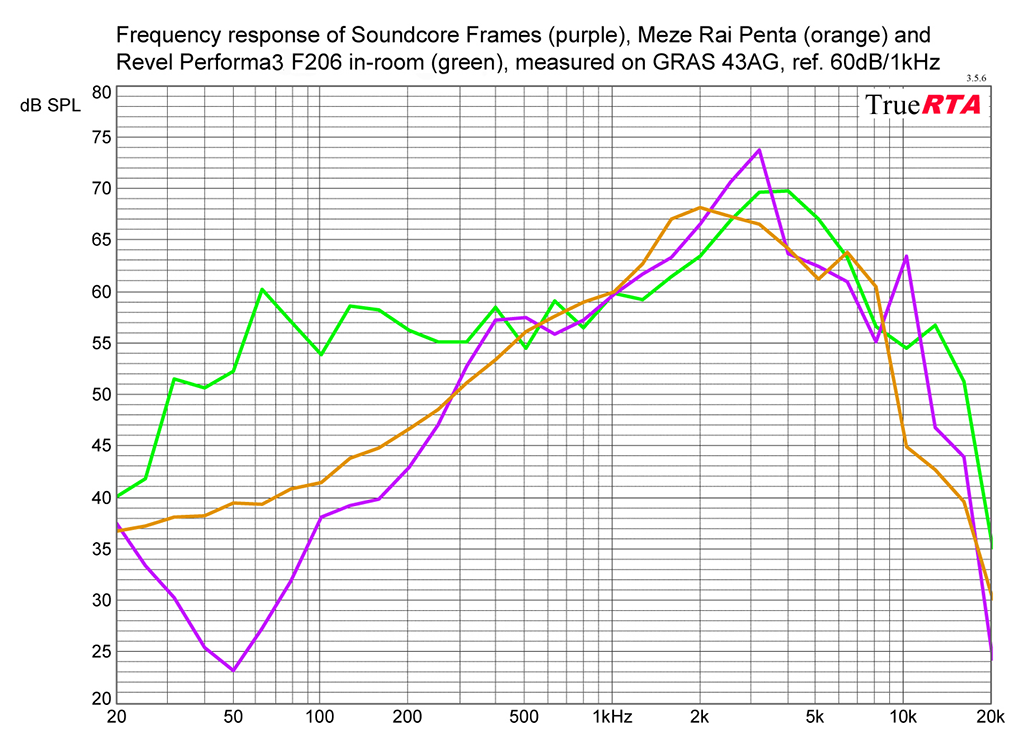 . . . I decided to compare them with speakers, specifically a Revel Performa3 speaker (one of the flattest-measuring speakers you can buy) measured in-room at a distance of 2.5m—but using the GRAS 43AG instead of a measurement microphone. I also threw in a good set of earphones, the Meze Rai Pentas, for comparison. Now the Frames’ response doesn’t look so wacky. In fact, the Frames aren’t far off the Revels’ response, except that they don’t have any bass. 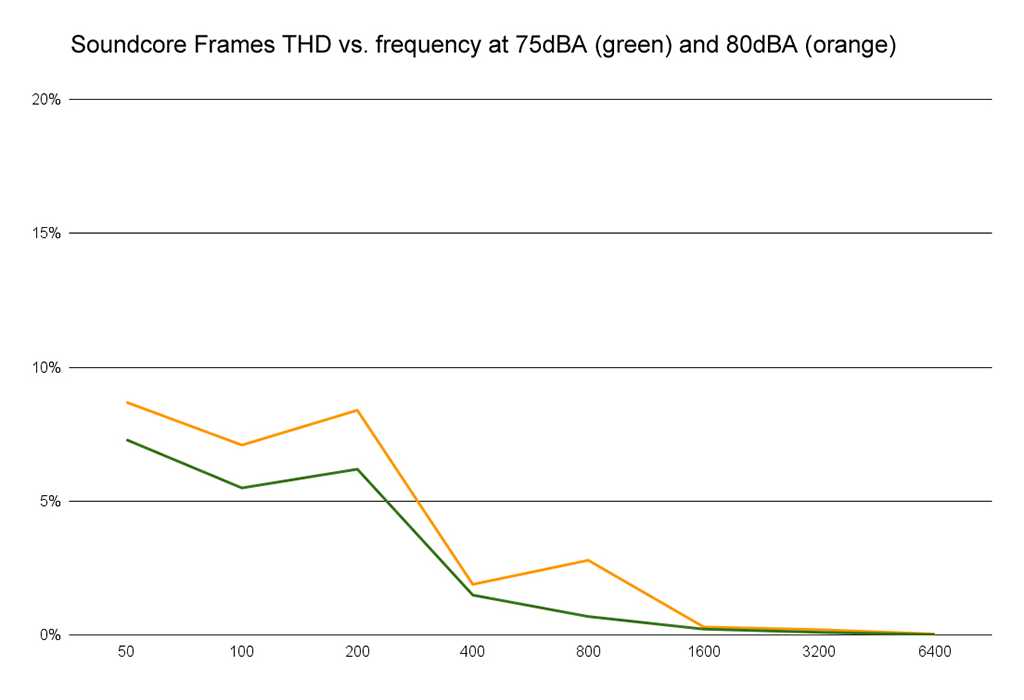 This looks different from our usual distortion chart because I couldn’t get the Clio 12 QC’s sine analyzer to track the Frames, perhaps due to the latency, or some other factor. Normally we do this measurement at 90dBA and 100dBA, but the Frames wouldn’t play that loud. Instead, I measured them at 80dBA and 75dBA. Not surprisingly considering the size of the drivers, distortion is fairly high in the bass, but I think you’d only notice it in the 200Hz range—lower than that, and the distortion harmonics are well outside the human ear’s range of maximum sensitivity, so the distortion doesn’t usually become audible until it tops about 10%. Above about 500Hz, distortion is actually pretty low. 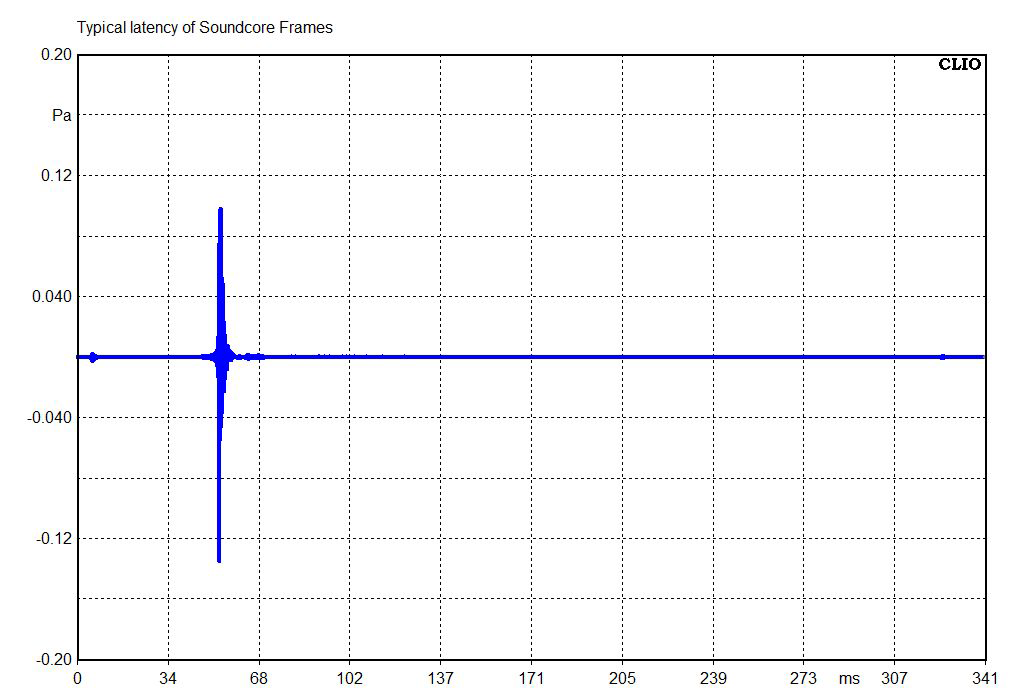 Latency with the Frames averaged around 53ms when fed signals from a Reiyin WT-04 USB Bluetooth transmitter. That’s surprising, considering that the Frames include no low-latency Bluetooth codecs, only SBC and AAC.

One more note: I measured the Frames’ maximum volume using the same technique I use to measure max volume of kids’ headphones—with -10dBFS pink noise playing full-blast, measured in dBA. I got 86.3dBA, which is about what I typically measure from kids’ headphones that limit volume as they’re supposed to (many do not). So that means the Frames play loud enough for casual listening, but not loud enough for any kind of focused, attentive music listening.

Bottom line: I assume this is the first set of measurements published for Bluetooth glasses, so we have no paradigm by which to judge the Frames. However, they’re designed with what seems to be a theoretically appropriate response for a product like this; their glaring flaw is that the tiny speaker drivers don’t play very loud or low.