I measured the Campfire Audio Holocene earphones using laboratory-grade equipment: a GRAS Model 43AG ear/cheek simulator/RA0402 ear simulator with KB5000/KB5001 simulated pinnae, and an Audiomatica Clio 12 audio analyzer. For isolation measurements, I used a laptop computer running TrueRTA software with an M-Audio MobilePre USB audio interface. The headphones were amplified using a Musical Fidelity V-CAN amplifier. I used the supplied medium-sized silicone tips for all measurements because they fit best in the ear simulator. These are “flat” measurements; no diffuse-field or free-field compensation curve was employed. If you’d like to learn more about what our measurements mean, click here. 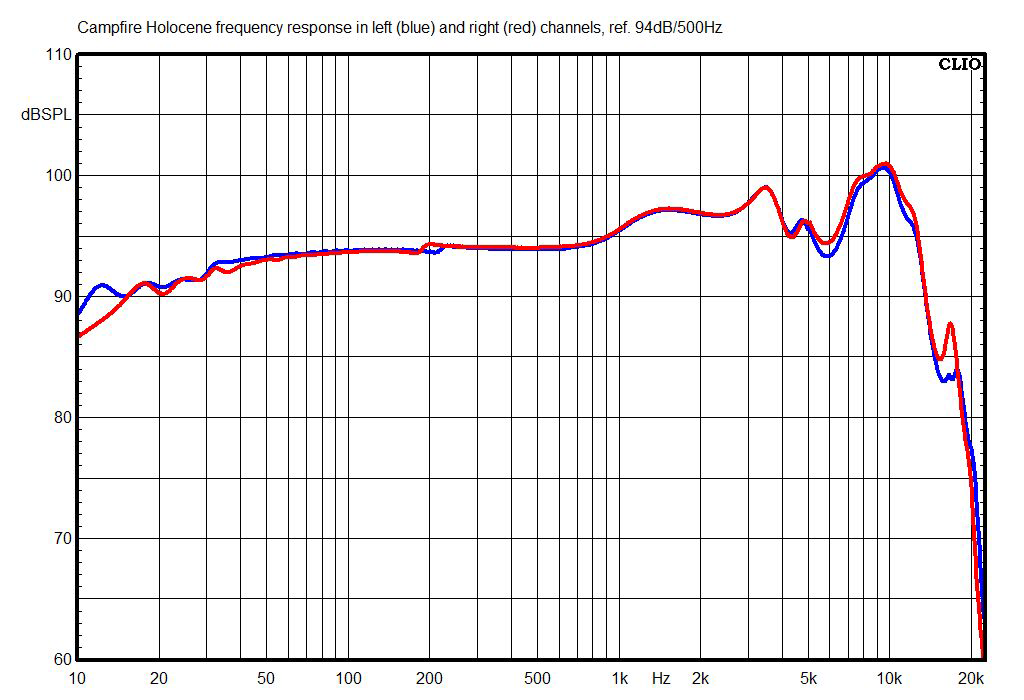 This chart shows the Holocenes’ frequency response. It’s definitely idiosyncratic, especially for earphones—mainly in that it’s much flatter than we normally see. Instead of a rise in the bass response below about 200Hz, the bass gradually rolls off. Instead of a strong, octave-wide, 10dB-ish peak somewhere between 2 and 4kHz, there’s a two-octave-wide bump of just 2 to 4dB. The strongest response is in a peak centered at about 9.5kHz. 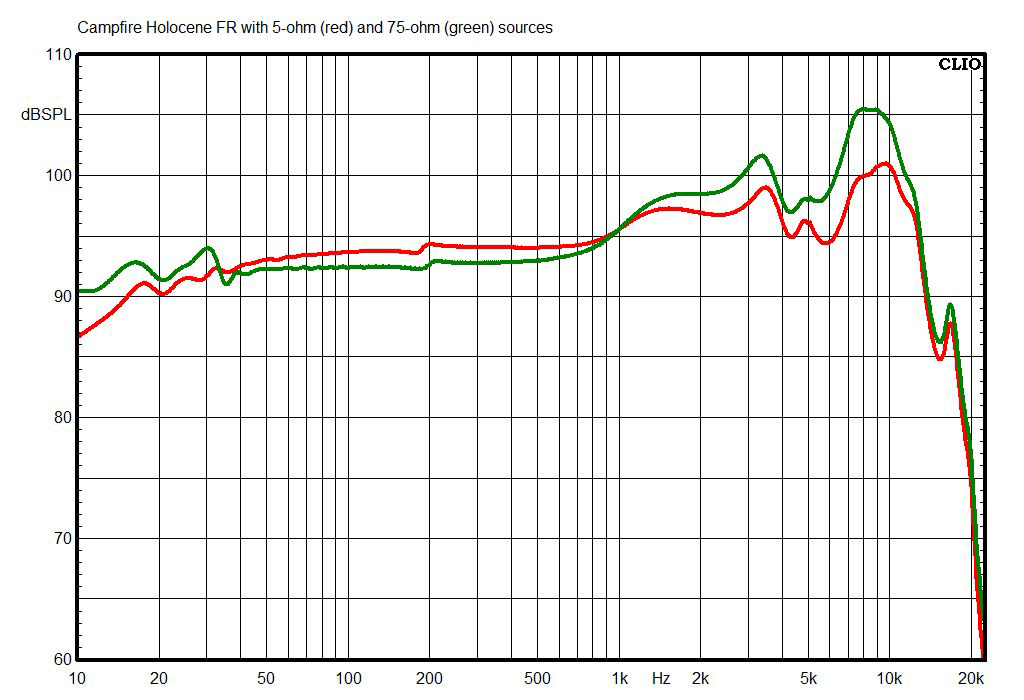 This chart shows how the Holocenes’ tonal balance changes when they’re used with a high-impedance source, such as a cheap laptop, some tube amps, or some professional headphone amps. As expected with balanced armatures, which have very non-flat impedance curves, there’s a big difference in tonal balance with the high-impedance source—it gets a lot more trebly. So I wouldn’t use these earphones with, say, a tube amp, and if I used them in the studio, I’d only do so with a headphone amp that has an output impedance of 1 ohm or lower (sadly, though, the output impedance of headphone amps is rarely specified). 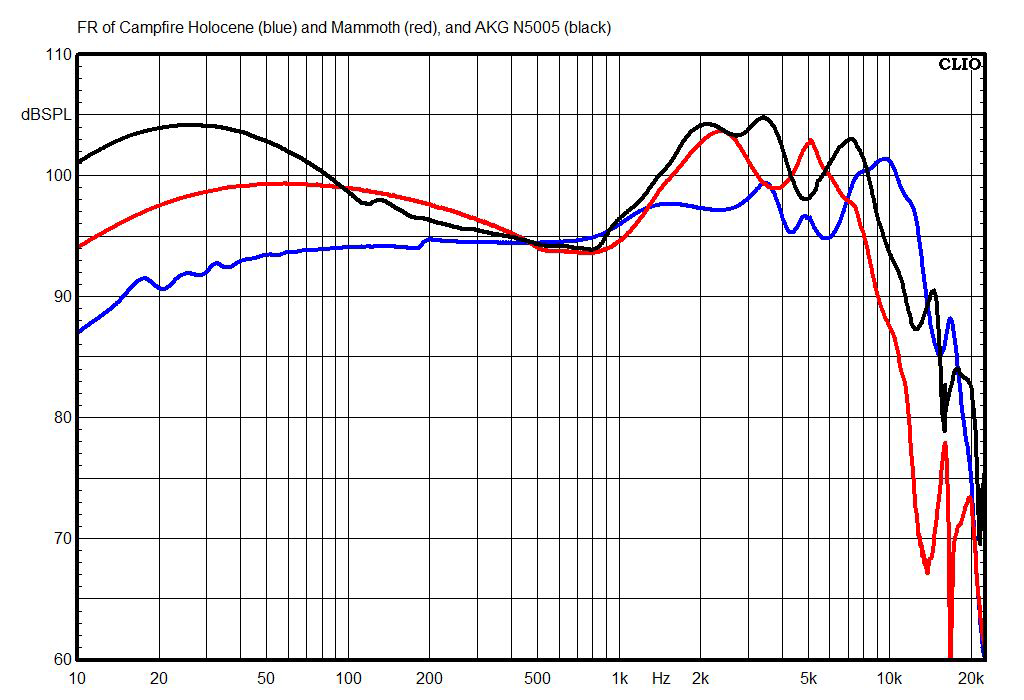 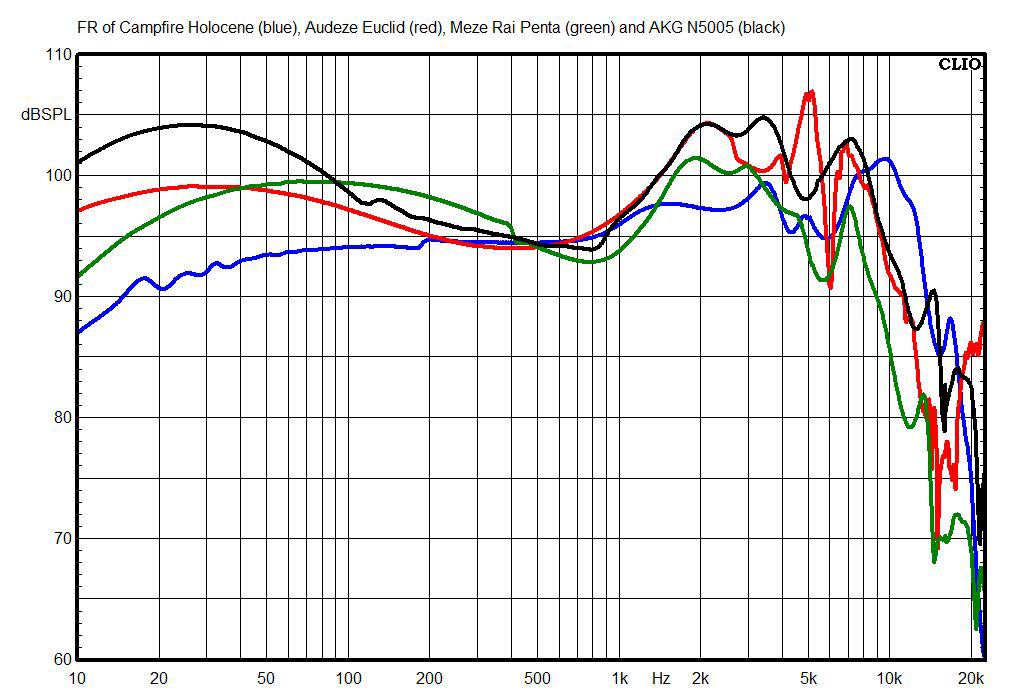 This chart shows the Holocenes’ right-channel response compared again with the AKG N5005 earphones, plus the Meze Rai Pentas and the Audeze Euclids—two high-end earphones I like a lot. It’s easy to see how idiosyncratic the Holocenes’ response is. The only earphones I can recall that measure anything like the Holocenes are the Sennheiser IE 300 earphones, which I thought were pretty great for their price. Because I didn’t bring my lab computer with me on my holiday travels, I couldn’t include that measurement here, but you can see it by clicking here. As you’ll see, the IE 300s’ curve looks much like the Holocenes’ curve, but with a lot more bass. 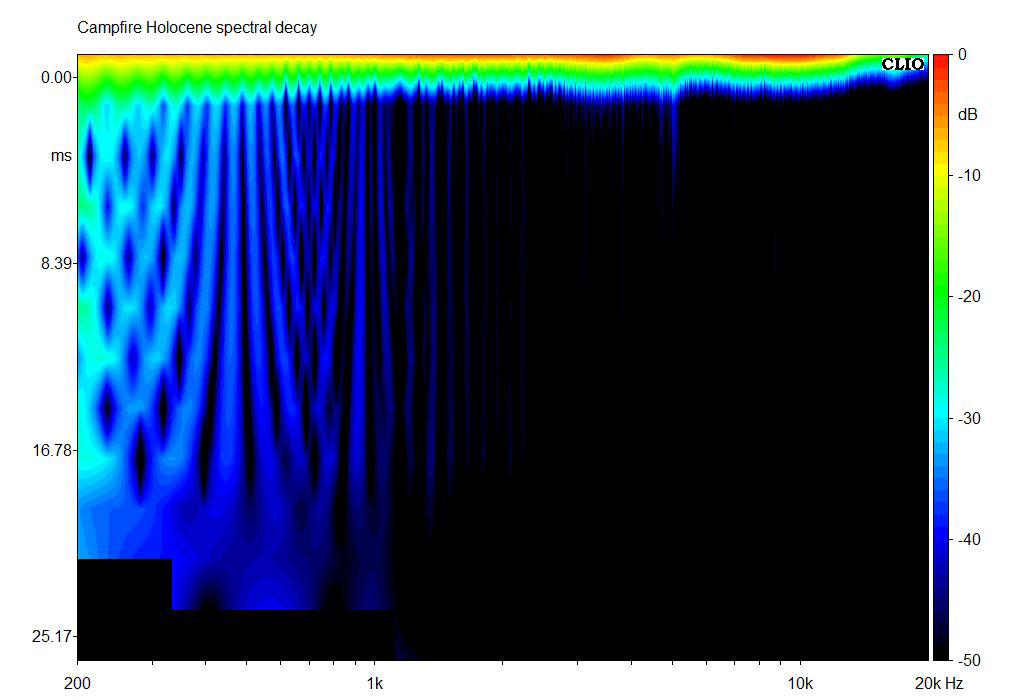 The Holocenes’ spectral-decay plot looks clean, with no significant resonances. 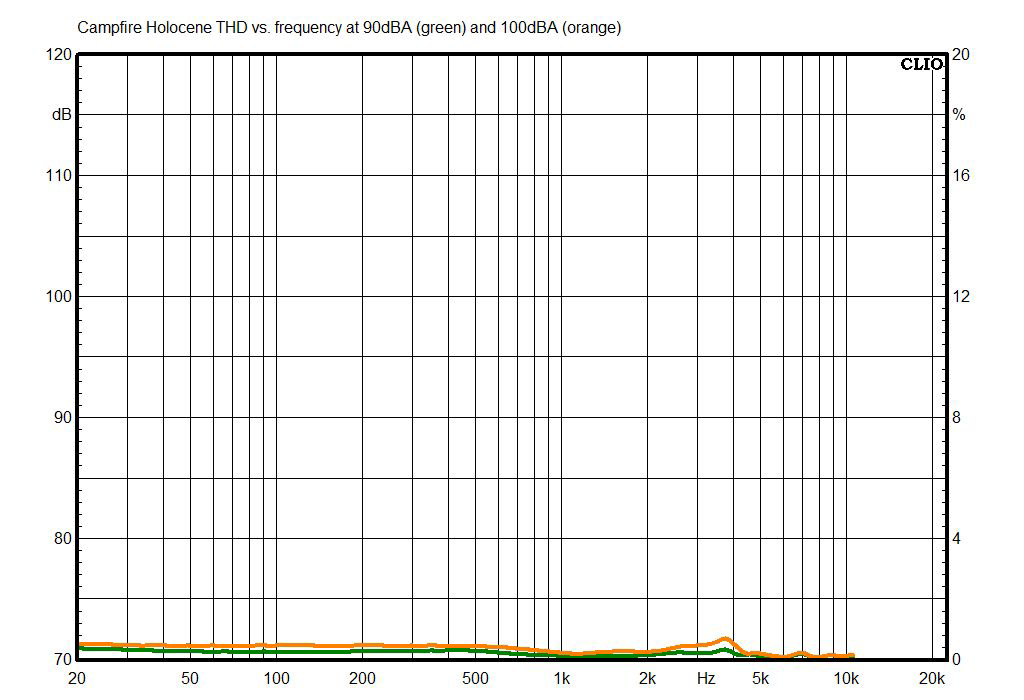 The Holocenes’ total harmonic distortion is very low, especially for balanced armatures—it never rises to even 1%. 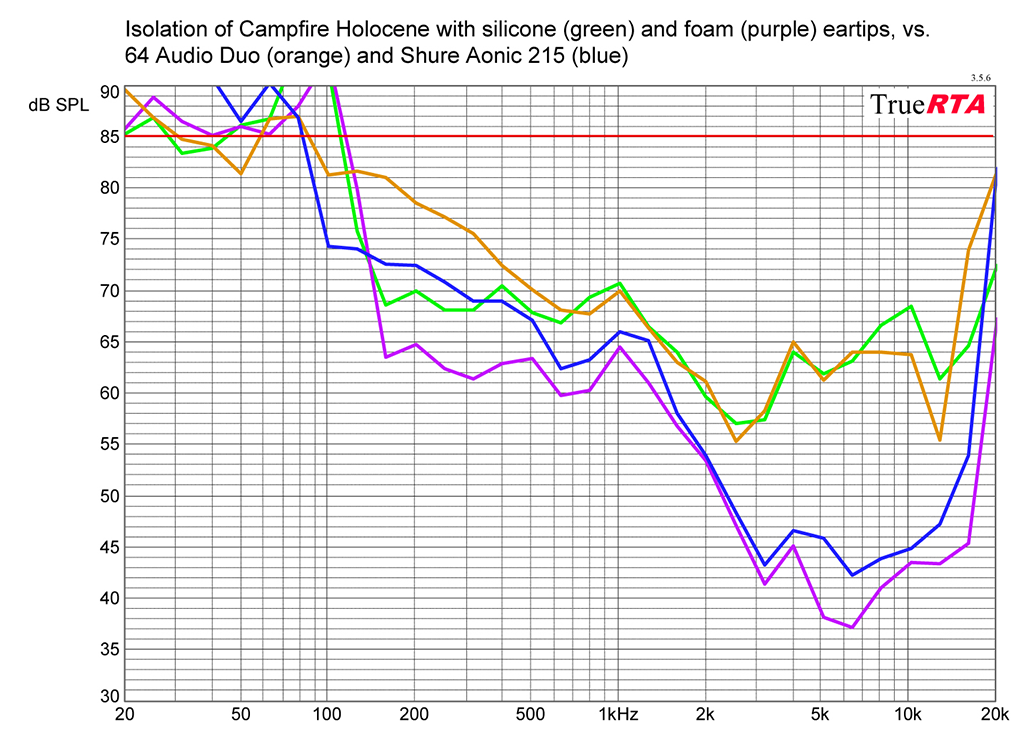 In this chart, the external noise level is 85dB SPL, and numbers below that indicate the degree of attenuation of outside sounds. The lower the lines, the better the isolation. With the foam tips installed, the Holocenes deliver outstanding isolation, so good that I had to lower the floor of the chart from 40dB SPL to 30dB to show the curve. Even in the upper bass, where many earphones deliver little or no isolation, the Holocenes averaged about a 20dB noise reduction. If you’re on a plane, you’ll still hear some low-frequency rumble, but this is actually better isolation than most noise-canceling headphones offer—and without the boost in noise above 1kHz that many noise-canceling headphones suffer. 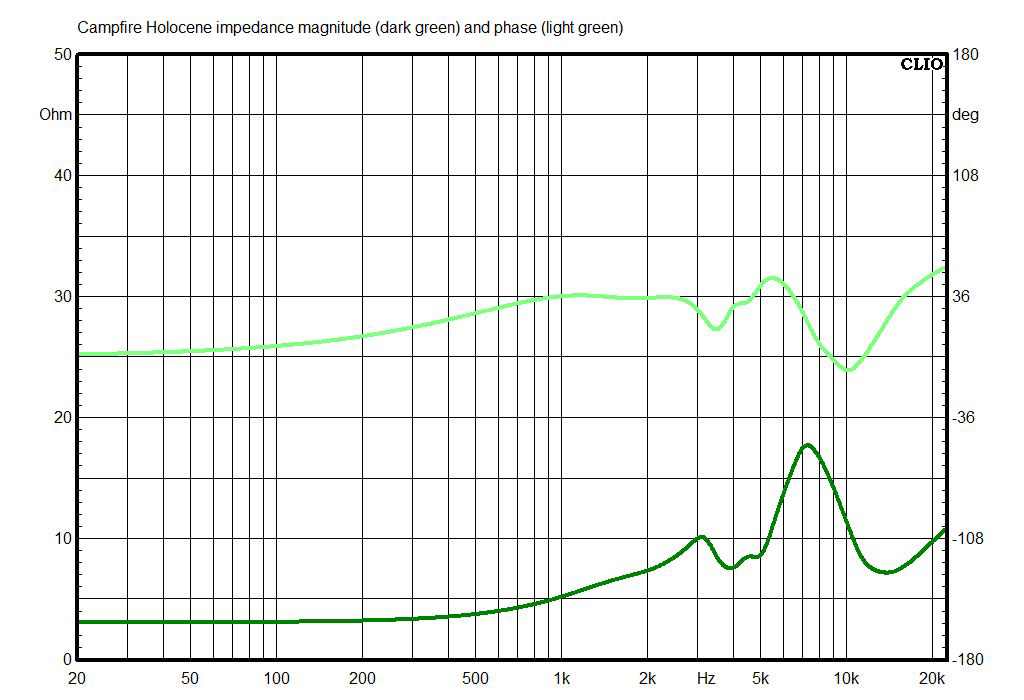 Sensitivity, measured between 300Hz and 3kHz, using a 1mW signal calculated for 5.4-ohms rated impedance, is 111.9dB. That’s very high, so the Holocenes will deliver loud volume from any source device.

Bottom line: I liked these earphones a lot, and I liked the somewhat similar-sounding, similar-measuring Sennheiser IE 300 earphones, too, so maybe this type of frequency response is a viable alternative to more typical earphone responses? Tough to say without a lot more research. Other than their idiosyncratic frequency response and their sensitivity to the output impedance of the source device (which is common with balanced armatures), the Holocene earphones appear to conform to standard engineering practice and show no technical flaws.