I measured the Campfire Audio Honeydew earphones using laboratory-grade equipment: a GRAS Model 43AG ear/cheek simulator/RA0402 ear simulator with KB5000/KB5001 simulated pinnae, and an Audiomatica Clio 12 audio analyzer. For isolation measurements, I used a laptop computer running TrueRTA software with an M-Audio MobilePre USB audio interface. For most measurements, the headphones were amplified using a Musical Fidelity V-CAN amplifier; I used a Schiit Magnius amplifier for distortion measurements. These are “flat” measurements; no diffuse-field or free-field compensation curve was employed. If you’d like to learn more about what our measurements mean, click here. 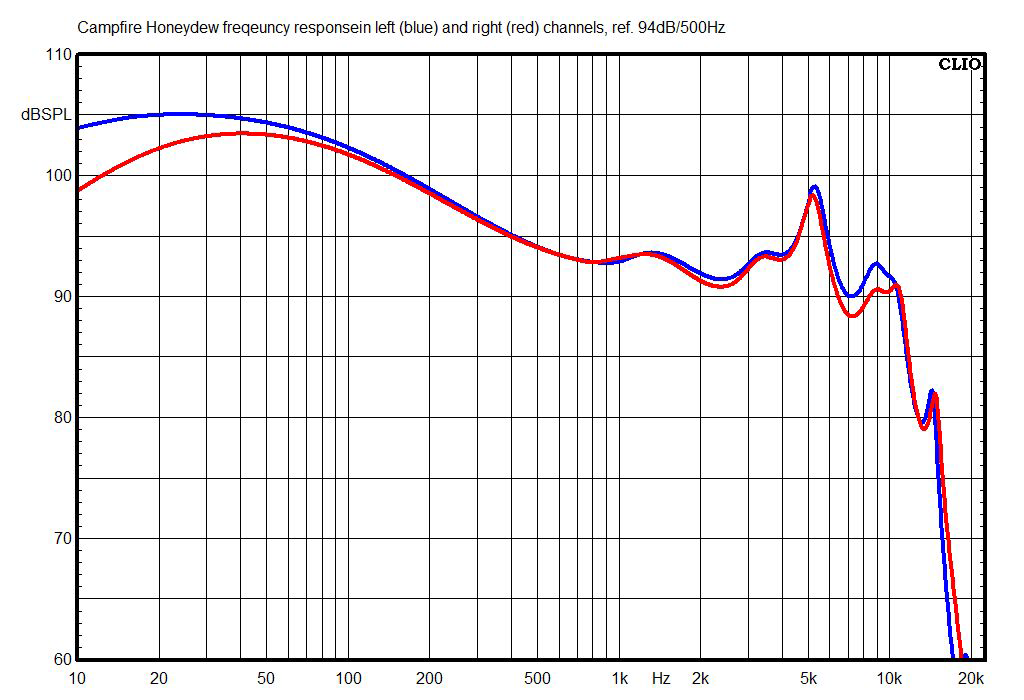 This chart shows the Honeydews’ frequency response. This is an unusual result in that the bass is substantially elevated relative to the treble, and instead of the usual big peak around 3kHz, there’s a dip. These earphones are definitely not going to sound trebly. 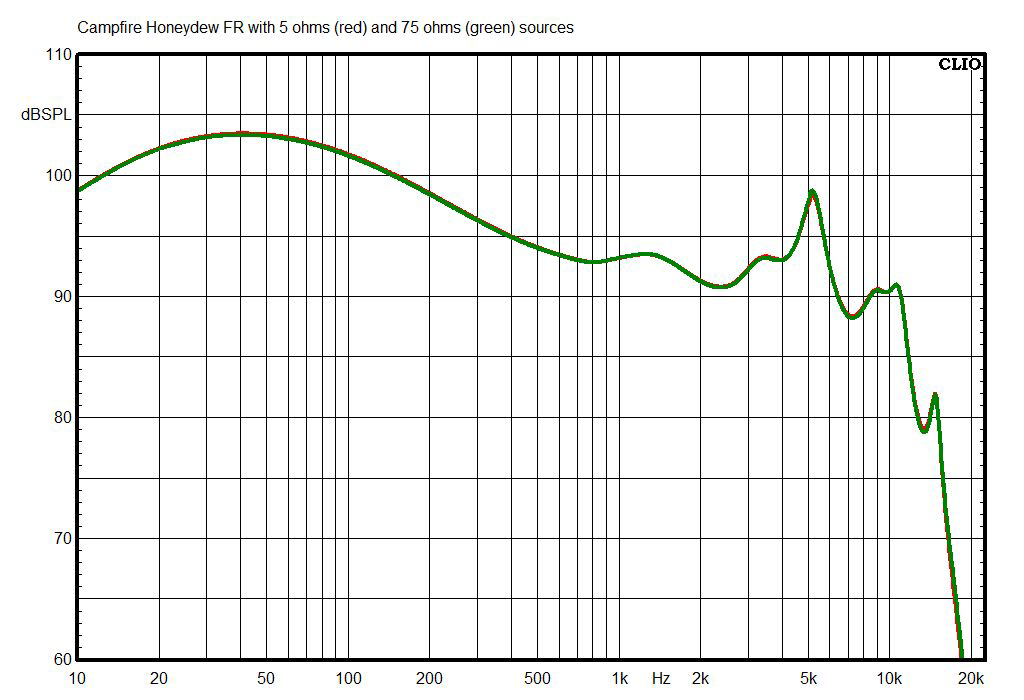 This chart shows how the Honeydews’ tonal balance changes when they’re used with a high-impedance source, such as a cheap laptop, some tube amps, or some professional headphone amps. There’s no difference at all, because the impedance of the driver is unusually flat even for a dynamic driver. 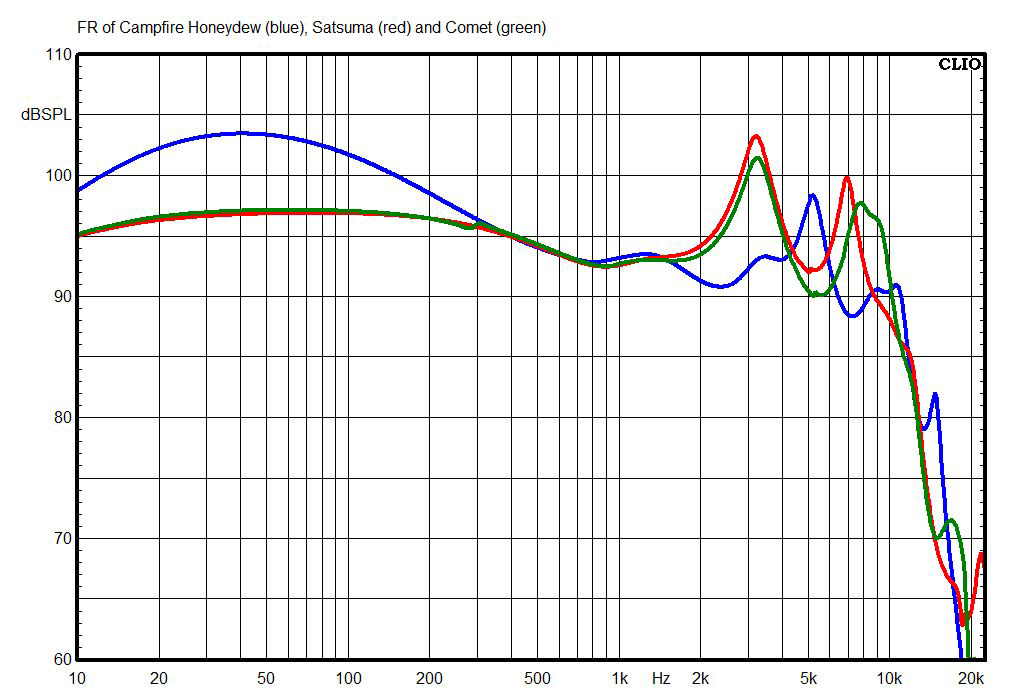 This chart shows the Honeydews’ right-channel response compared with two other Campfire Audio products: the Satsuma and the Comet earphones, both of which use a single balanced-armature driver per earpiece, along with a stainless-steel sound tube similar to the one used with the Honeydews. The Honeydews are definitely the odd duck of this family. 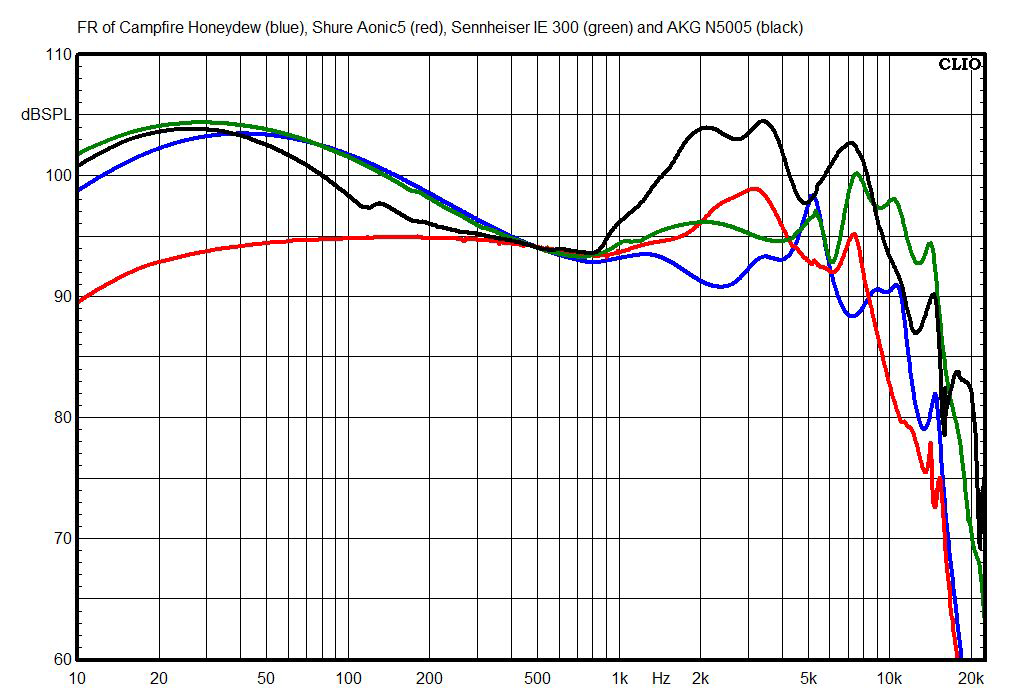 This chart shows the Honeydews’ right-channel response compared with models from other brands: the dynamic-driver Sennheiser IE 300s, the Shure Aonic5s (a triple balanced-armature design), and the AKG N5005s, which are said to be the earphones that come closest to the basic Harman curve target response for earphones. The Honeydews have bass response similar to that of the AKGs, but the treble is down 10 to 13dB relative to the AKGs. Clearly, this is a very warm, bassy-sounding set of earphones. 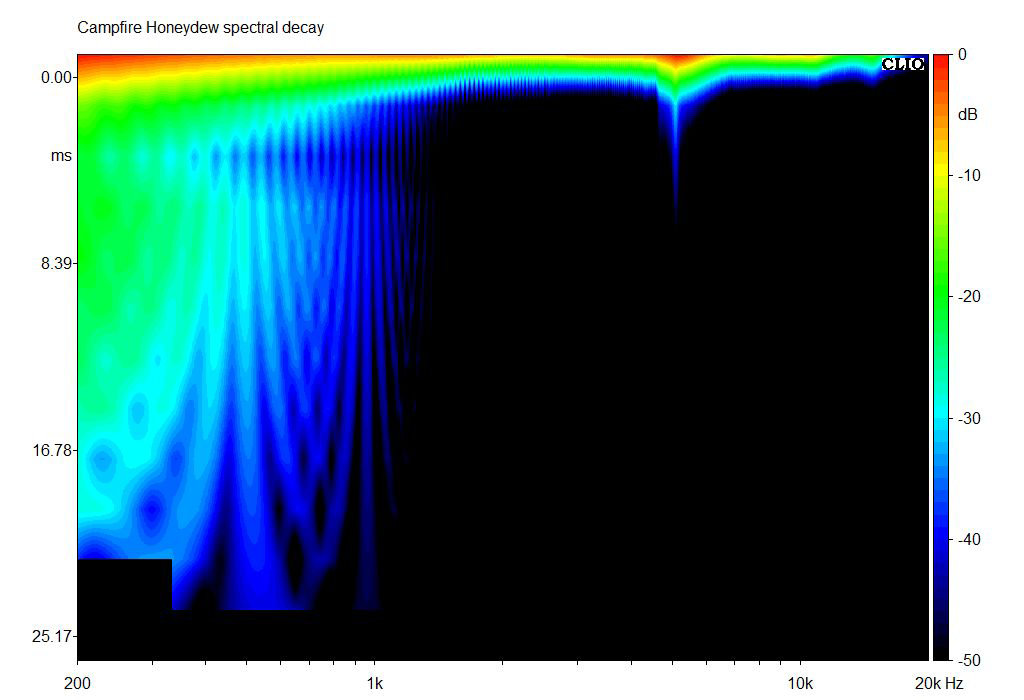 The Honeydews’ spectral-decay plot looks clean, with just a bit of resonance in the bass and nothing of significance in the mids and treble. 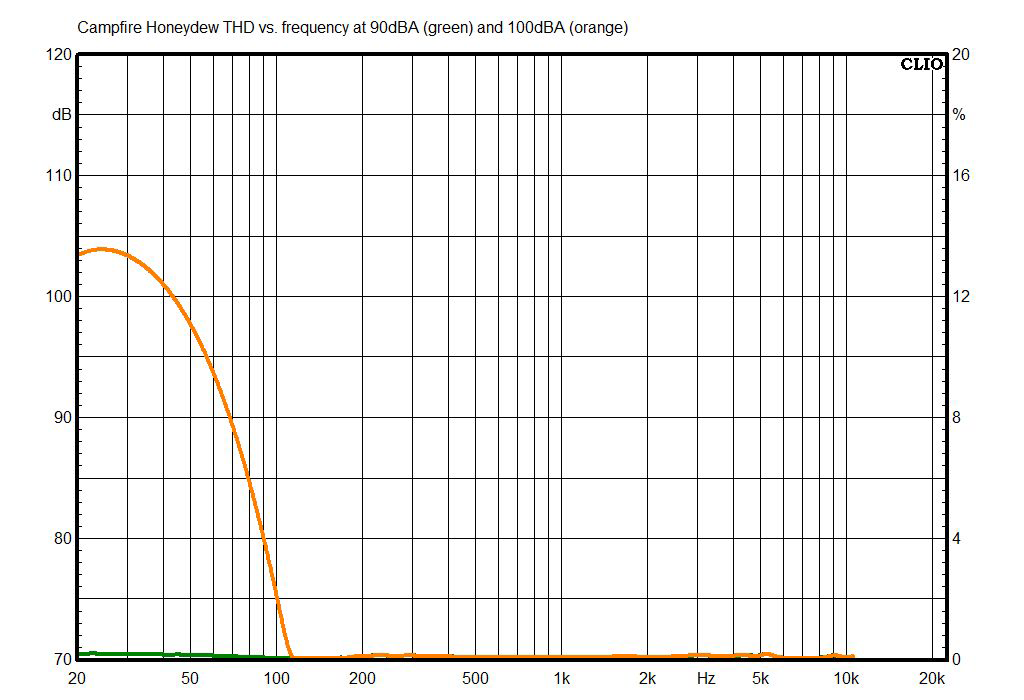 Total harmonic distortion of the Honeydews is exceptionally low at the very loud level of 90dBA (measured with pink noise), but at the extremely loud level of 100dBA, it rises dramatically below 120Hz, up to about 13.5% in the deep bass. However, distortion at low frequencies isn’t very audible, thanks to the ear’s relatively low sensitivity at those frequencies; 10% is considered a good general guideline for the threshold of audibility of subwoofer distortion. Having measured distortion of a few hundred subwoofers, I can confirm that the Honeydews’ bass distortion would be only barely, and probably fleetingly, audible. 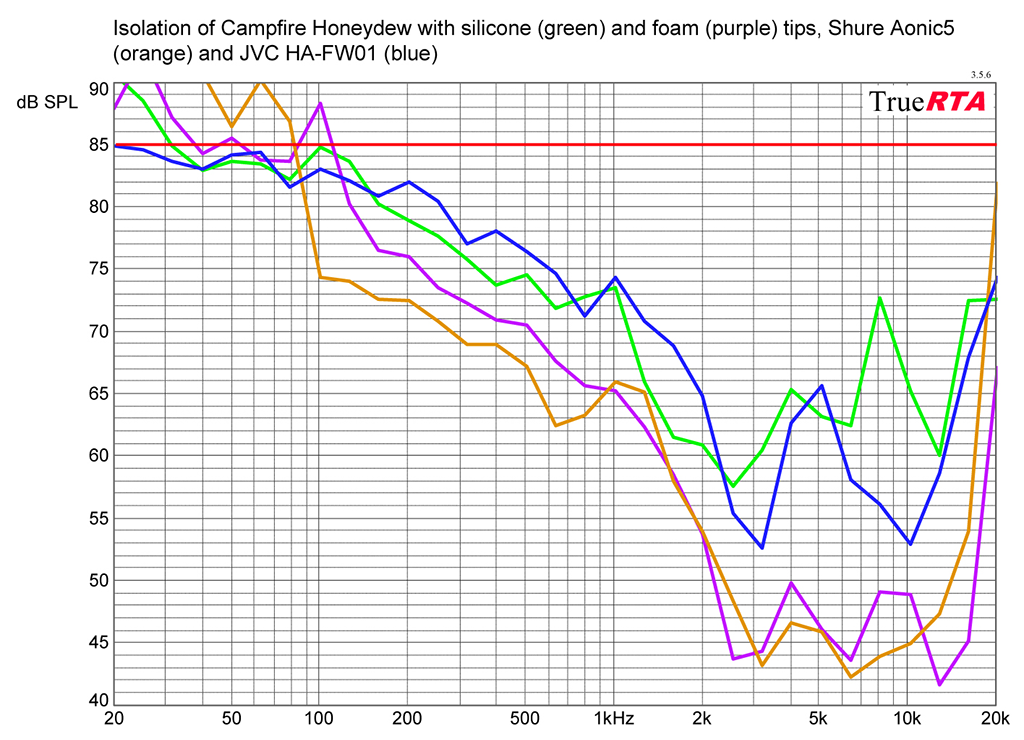 In this chart, the external noise level is 85dB SPL, and numbers below that indicate the degree of attenuation of outside sounds. The lower the lines, the better the isolation. As with the Satsuma earphones, the Honeydew earphones offer only average isolation when used with the included silicone tips. But the Honeydews are based on the Comets, which have some of the best passive isolation I’ve ever measured when used with their supplied foam tips, so out of curiosity, I tried the Honeydews with some similar foam tips, and the result was about as good as passive isolation gets with earphones. 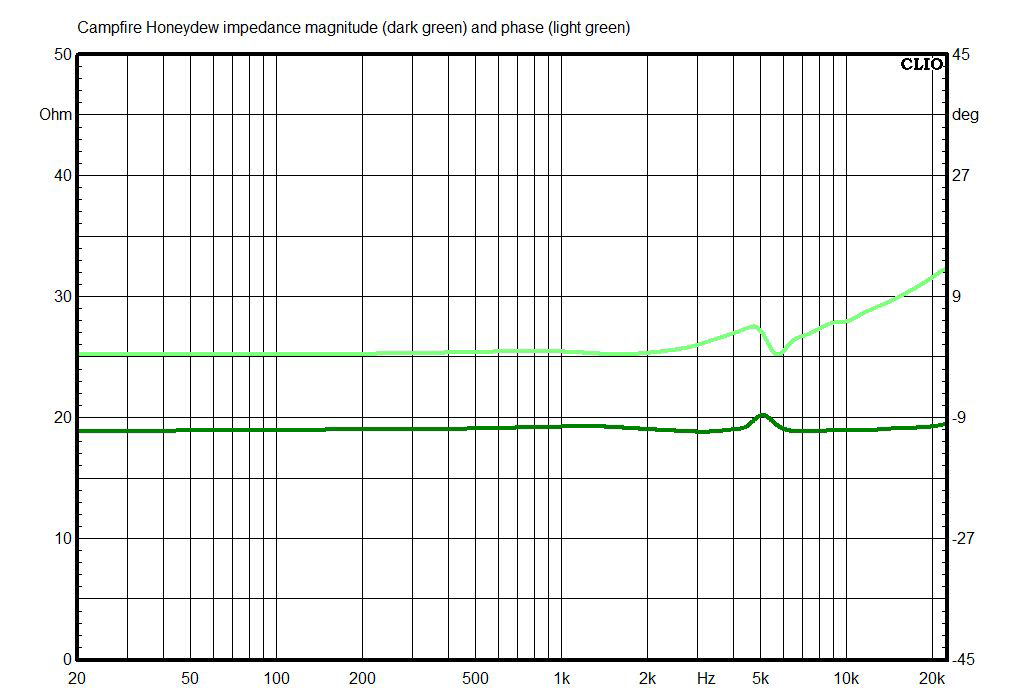 The Honeydews’ impedance curve is effectively flat at 19 ohms, and there’s near-zero phase shift, which means the Honeydews’ sound won’t change with the input impedance of the source device.

Sensitivity, measured between 300Hz and 3kHz, using a 1mW signal calculated for 17.4 ohms rated impedance, is 112.3dB. That’s exceptionally high, so any source device can get high volume from the Honeydews.

Bottom line: The Honeydew earphones have a measured response that suggests a big, fat, warm sound. It’s a substantially different response than you’ll hear from most earphones. Whether that works for you is very much a matter of personal taste.