I measured the Campfire Audio Satsuma earphones using laboratory-grade equipment: a GRAS Model 43AG ear/cheek simulator/RA0402 ear simulator with KB5000/KB5001 simulated pinnae, and an Audiomatica Clio 12 audio analyzer. For isolation measurements, I used a laptop computer running TrueRTA software with an M-Audio MobilePre USB audio interface. For most measurements, the headphones were amplified using a Musical Fidelity V-CAN amplifier; I used a Schiit Magnius amplifier for distortion measurements. These are “flat” measurements; no diffuse-field nor free-field compensation curve was employed. If you’d like to learn more about what our measurements mean, click here. 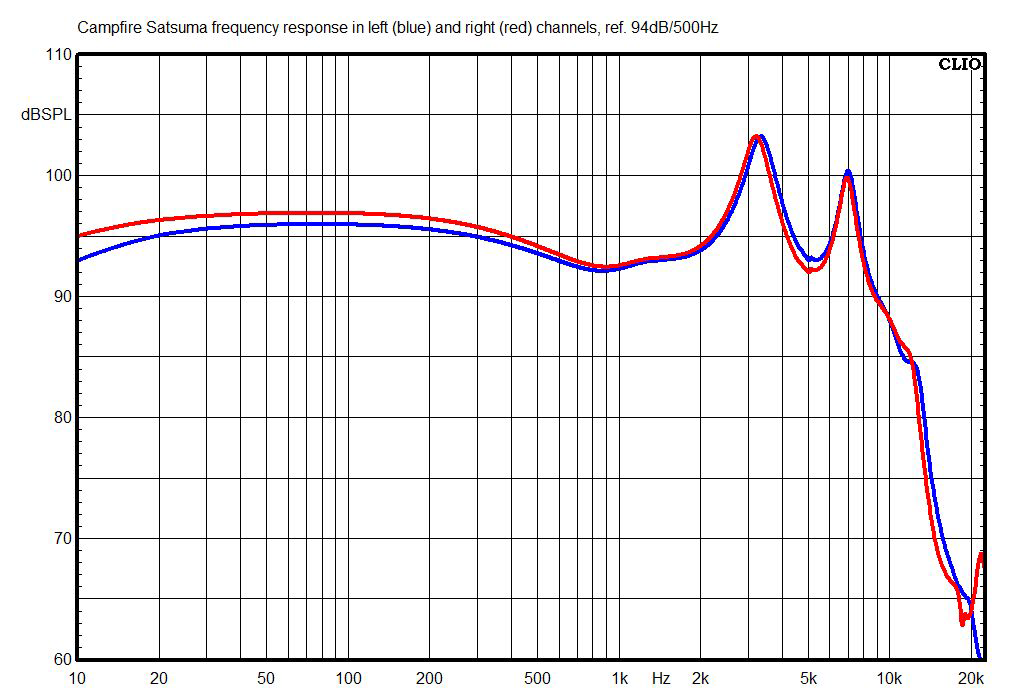 This chart shows the Satsumas’ frequency response. You could say this is similar to the historical norm for earphones, with the broad rise below about 800Hz, although the peaks centered at 3.2 and 7 are greater in magnitude and higher in Q (i.e., narrower) than usual. This suggests these earphones will sound bright. 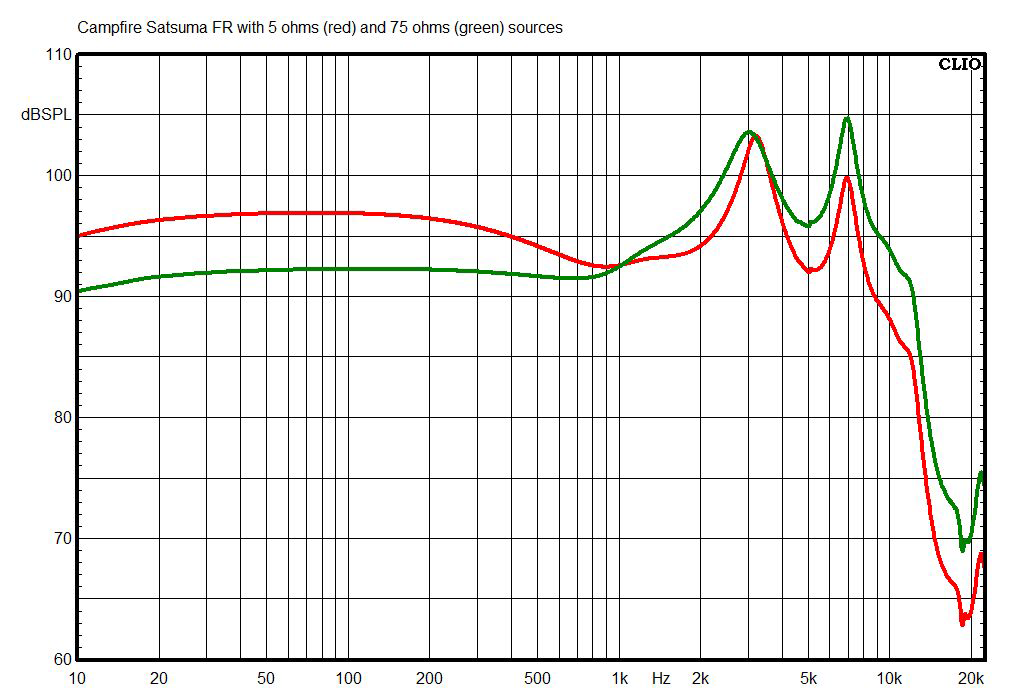 This chart shows how the Satsumas’ tonal balance changes when they’re used with a high-impedance source, such as a cheap laptop, some tube amps, or some professional headphone amps. There’s a big difference here, which is what I’d expect to see with single-driver balanced armature earphones. So the Satsumas’ sound will vary significantly depending on the impedance of the source device—when used with an amp that has a tube output stage, the sound will get even brighter. 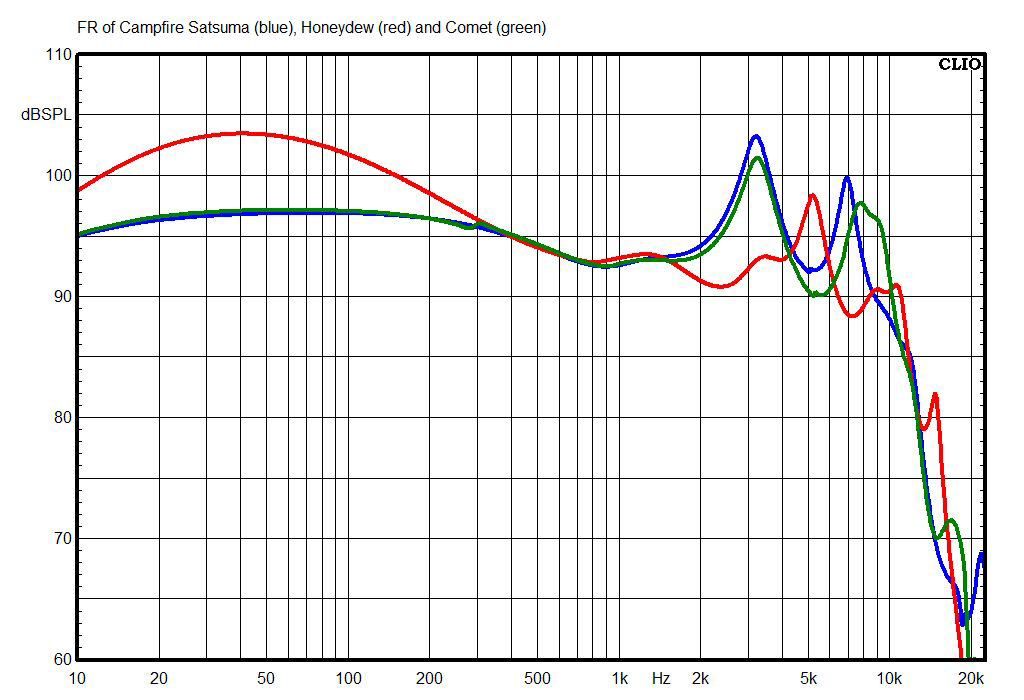 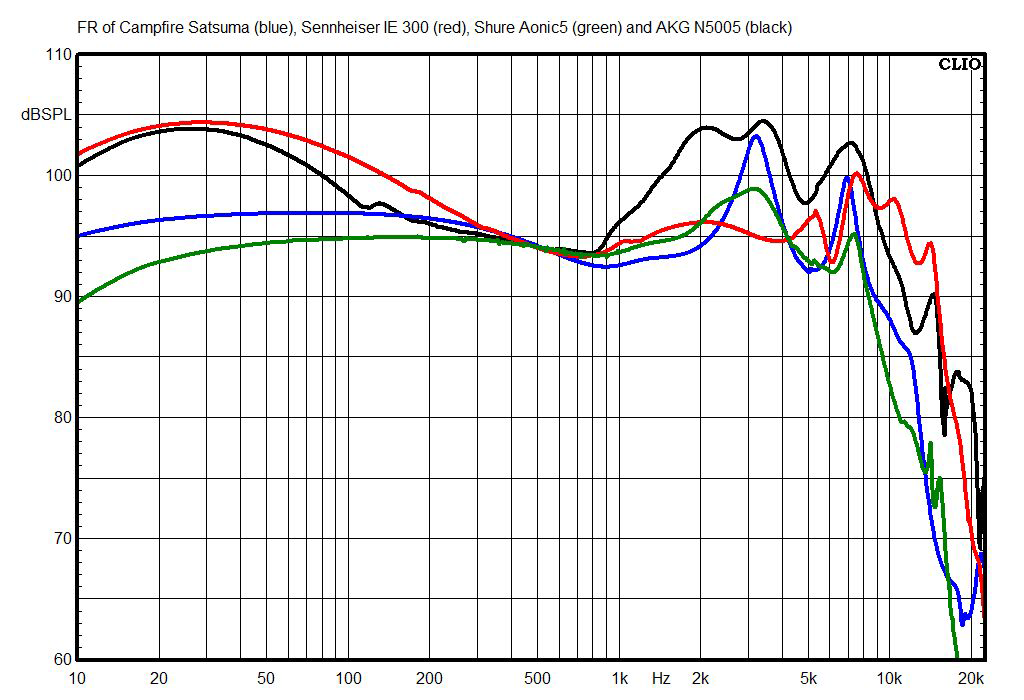 This chart shows the Satsumas’ right-channel response compared with models from other brands: the dynamic-driver Sennheiser IE 300s, the Shure Aonic5s (a triple balanced-armature design), and the AKG N5005s, which are said to be the earphones that come closest to the basic Harman curve target response for earphones. Although the AKGs have a lot more overall treble energy, it’s balanced out by the bass, so the Satsumas will sound brighter. 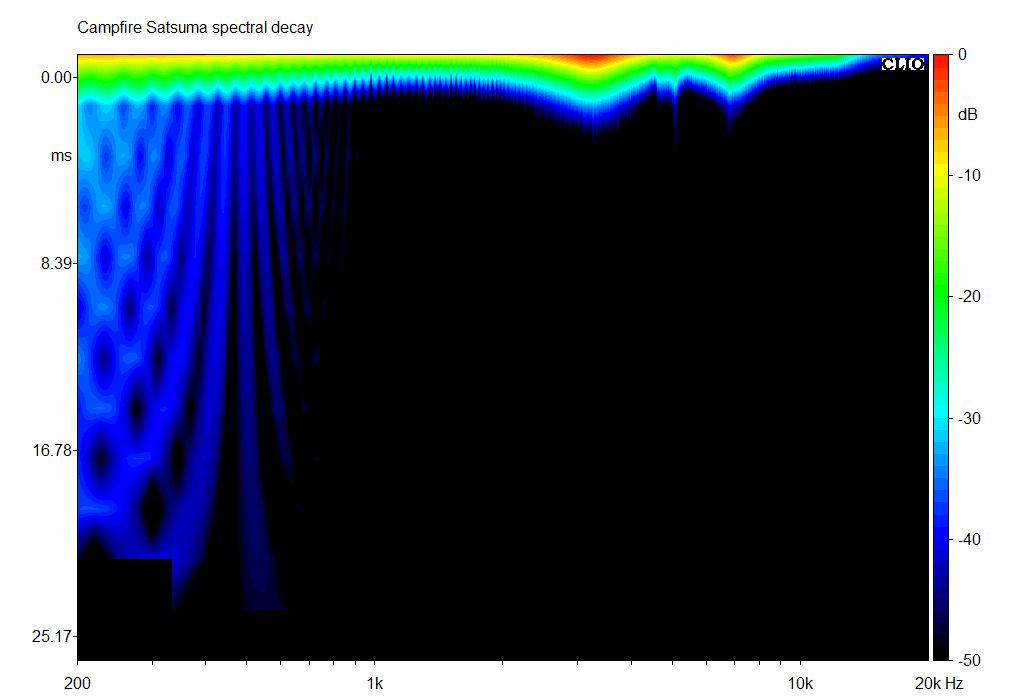 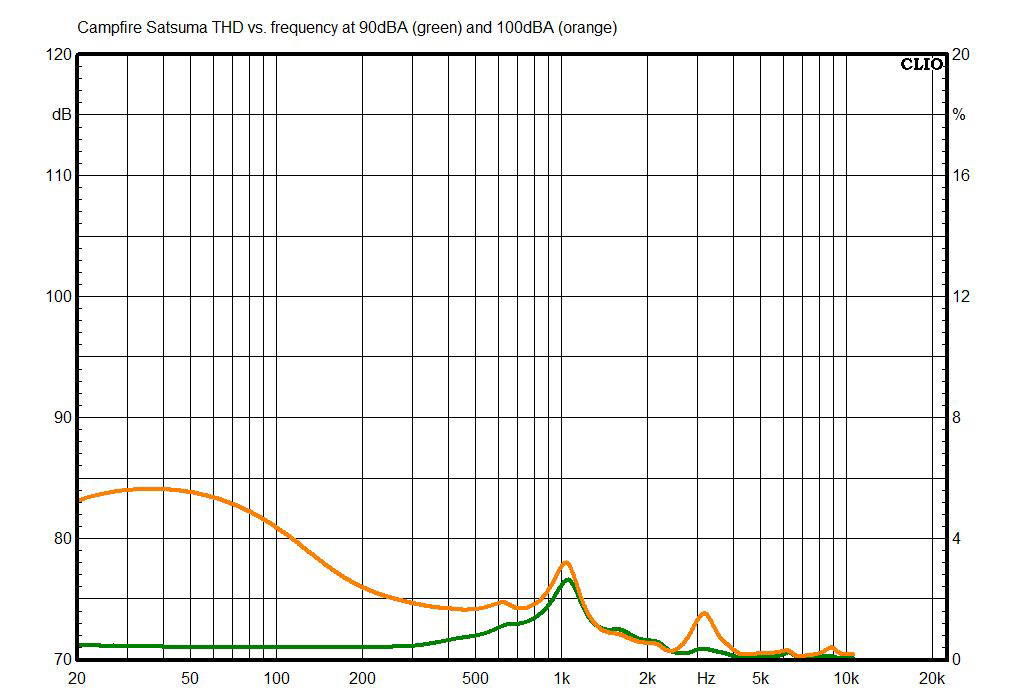 Total harmonic distortion of the Satsumas is a little on the high side relative to most earphones, but still, even at the extremely loud level of 100dBA (measured with pink noise), it doesn’t break 5% until you get below 80Hz, where harmonic distortion isn’t very audible, anyway. 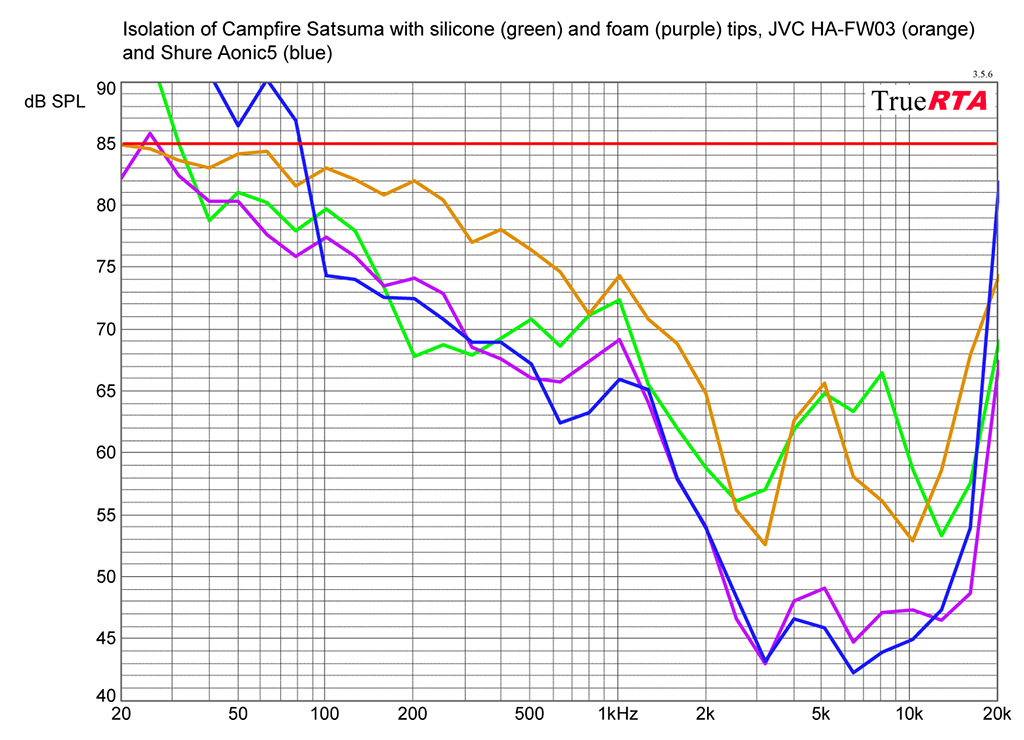 In this chart, the external noise level is 85dB SPL, and numbers below that indicate attenuation of outside sounds. The lower the lines, the better the isolation. As you can see, the Satsumas, with their silicone tips, offer isolation that’s fairly typical for passive earphones. The Comets, on which the Satsumas are based, include foam tips, and they have some of the best passive isolation I’ve ever measured, so out of curiosity, I tried the Satsumas with some similar foam tips, and got isolation similar to what I measured from the Comets. 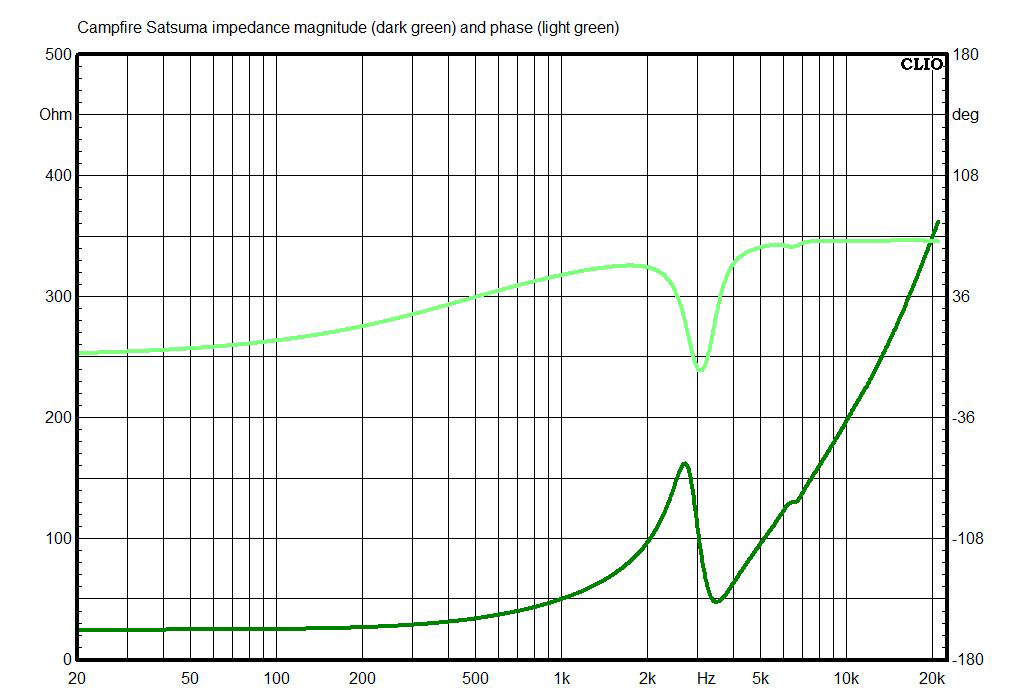 The Satsuma earphones’ impedance curve shows a huge swing from about 23 ohms at 20Hz to 350 ohms at 20kHz. The phase shift is likewise huge: +69 degrees above about 7kHz. This is why we see so much difference in frequency response with high- and low-impedance sources.

Sensitivity, measured between 300Hz and 3kHz, using a 1mW signal calculated for 46.4 ohms rated impedance, is 109.5dB. That’s very high, so the Satsumas should be able to deliver reasonably loud volume from any mobile device with a headphone jack.

Bottom line: The Satsuma earphones are clearly going to sound bright relative to typical earphones—and especially if you use them with a high-impedance source. Their treble will also have a bit different of a sound than that of most earphones, with specific and narrow emphasis in the lower and middle treble regions. But this is pretty much the way the Campfire Comets measured, and they were a very popular set of earphones among audiophiles.