I measured the AKG K72 headphones using laboratory-grade equipment: a GRAS Model 43AG ear/cheek simulator/RA0402 ear simulator with KB5000/KB5001 simulated pinnae, and an Audiomatica Clio 12 audio analyzer. For isolation measurements, I used a laptop computer running TrueRTA software with an M-Audio MobilePre USB audio interface. For most measurements, the headphones were amplified using a Musical Fidelity V-CAN amplifier; I used a Schiit Magnius amplifier for distortion measurements. These are “flat” measurements; no diffuse-field or free-field compensation curve was employed. If you’d like to learn more about what our measurements mean, click here. 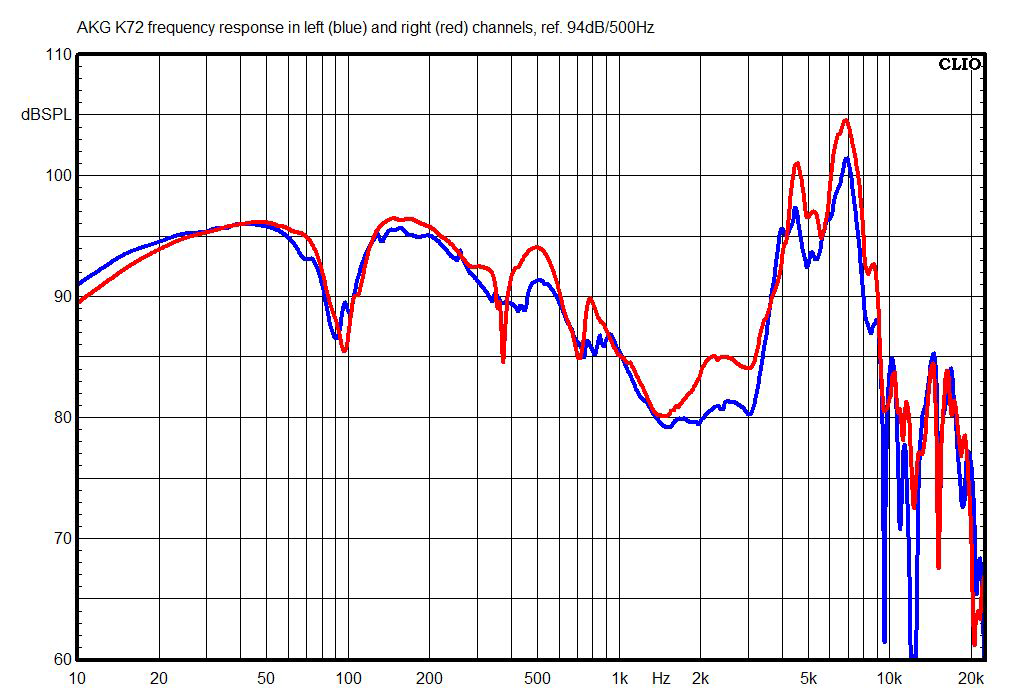 This chart shows the K72s’ frequency response. This looks somewhat “old-school dynamic headphones” to me, with a big, broad hump in the bass balanced out by a large, broad peak in the lower- and mid-treble ranges. By Harman curve standards, there’s about a 5dB excess of energy below 600Hz, which may be the reason I thought these sounded slightly bassy, and about a 5dB deficit from 1 to 4kHz. 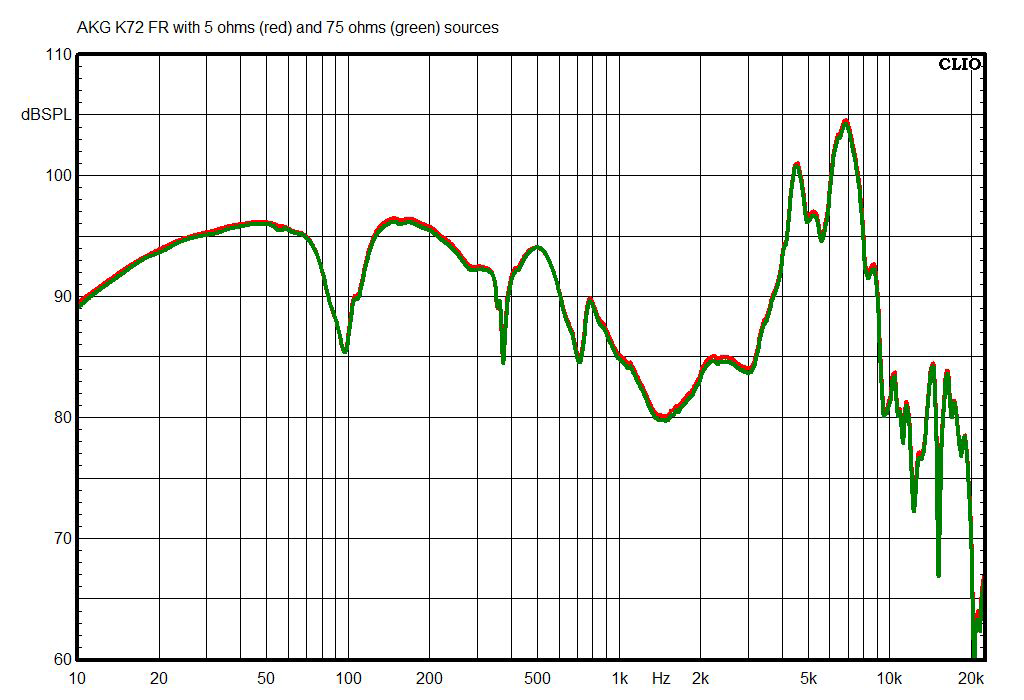 This chart shows how the K72s’ tonal balance changes when they’re used with a high-impedance source, such as a cheap laptop, some tube amps, or some professional headphone amps. There’s no audible difference, which comes as no surprise when you’ve seen the unusually flat impedance curve below. 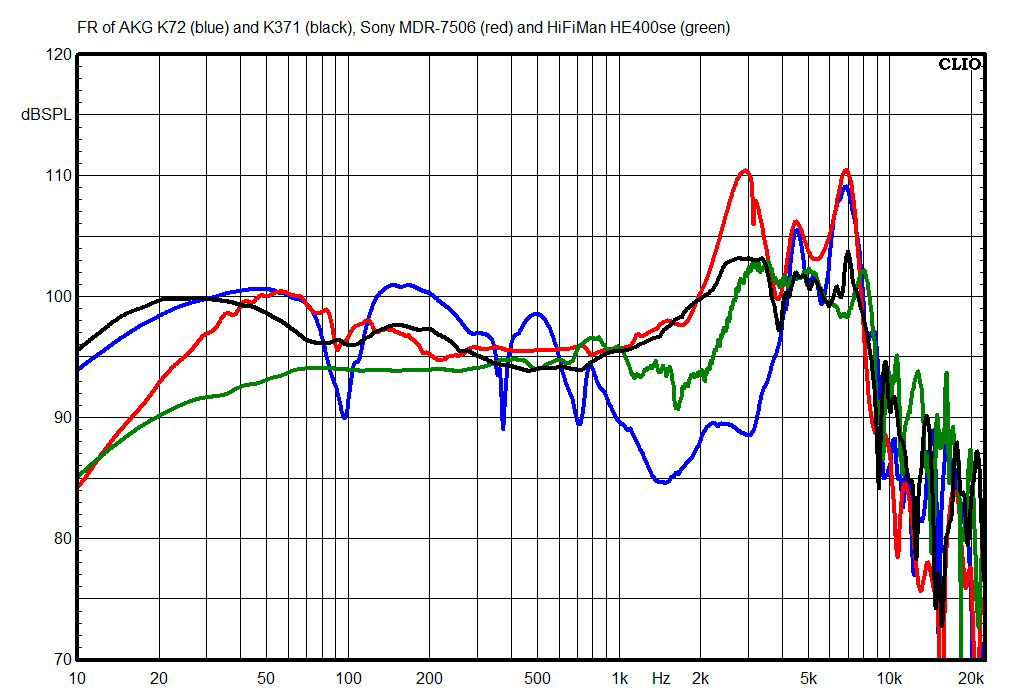 This chart shows the K72s’ right-channel response compared with two other affordable studio headphones and the HiFiMan HE400se open-back headphones. You can easily see that the K72s are less flat than their competitors, and the deficit of midrange energy is evident. 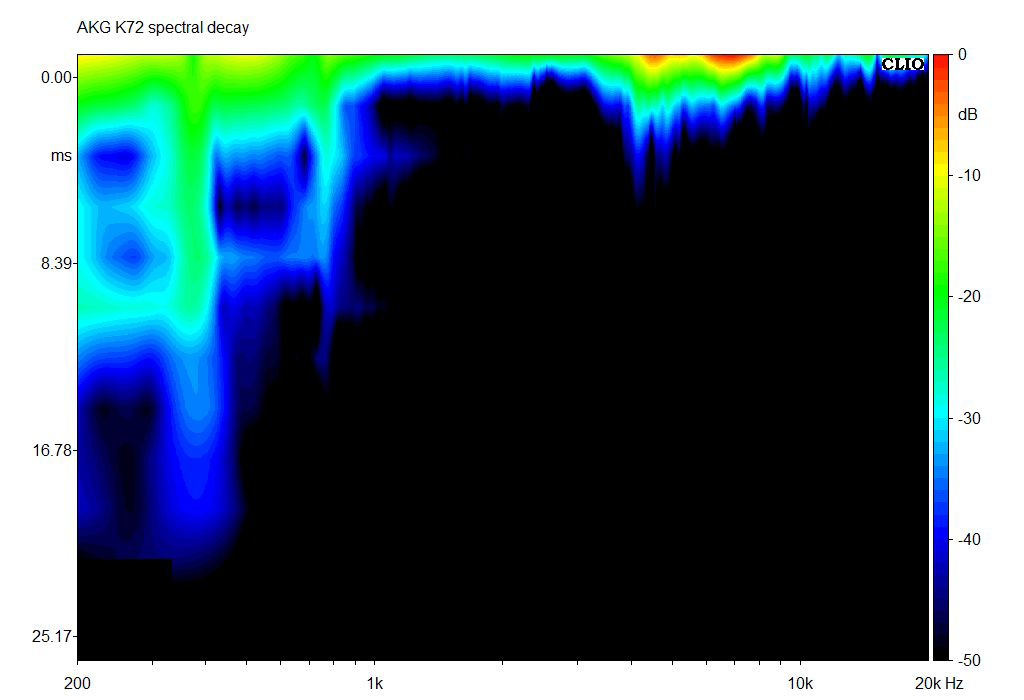 The K72s’ spectral-decay plot looks clean, with just a bit of resonance in the bass. Maybe that’s what’s giving me the impression of somewhat boosted bass. 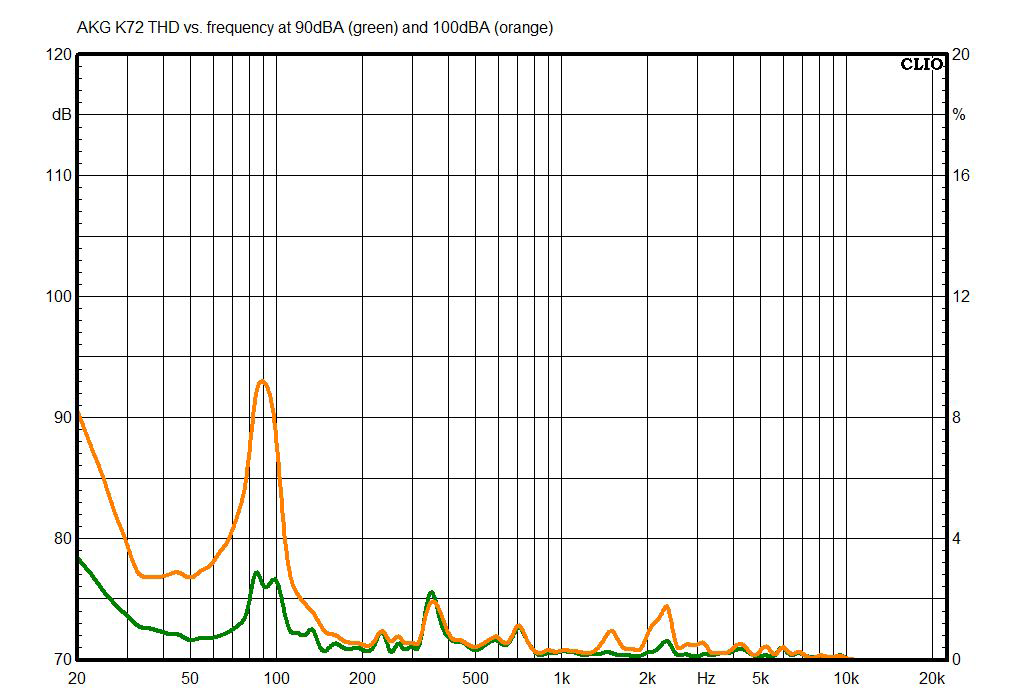 Other than an unusual spike centered at 80Hz, distortion of the K72s is modest even at very loud listening levels. 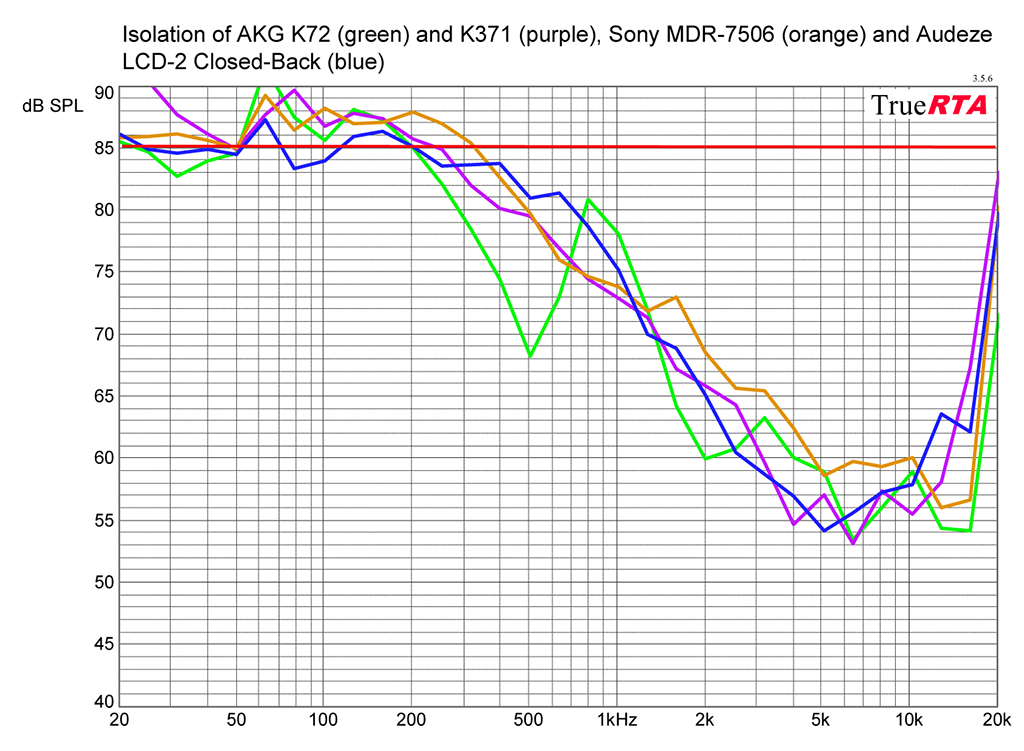 In this chart, the external noise level is 85dB SPL, and numbers below that indicate the degree of attenuation of outside sounds. The lower the lines, the better the isolation. As you can see, the K72s offer isolation comparable to that of other closed-back models. 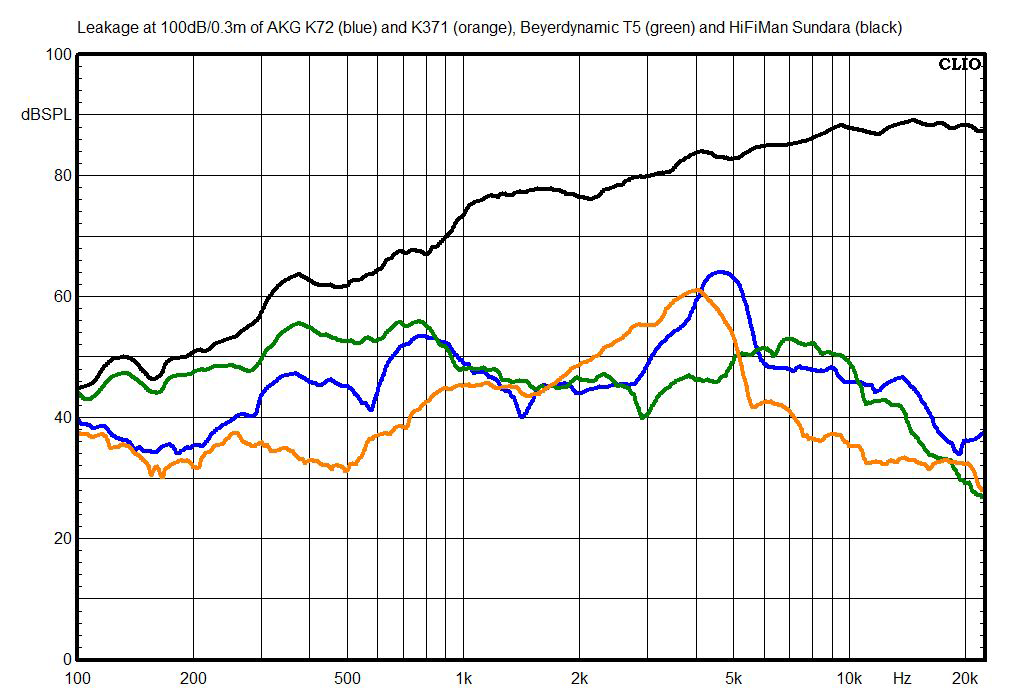 As promised in the review, I ran some quick-and-dirty leakage measurements to get a rough idea of how well the K72s live up to their claim of excellent isolation—meaning, in this case, preventing the sound in the headphones from leaking out. To do this, I suspended my Audiomatica MIC-01 measurement microphone 0.3m above the plate of the GRAS ear/cheek simulator; set the level in the headphones at 100dB, using pink noise; then ran a logarithmic chirp tone through the headphones and measured the sound at the microphone. The traces you see on the graph above show how much each frequency of sound leaks out of the different headphone models. I included the K72 and the AKG K371 headphones, as well as the Beyerdynamic T5s and the HiFiMan Sundaras (so you could see how a typical open-back model performs on this test). The leakage of the K72s seems confined enough to prevent significant leakage of sound into recording microphones (depending on the microphone pickup pattern and the output of the instrument), although it’s probably not quite as good as that of the K371s. 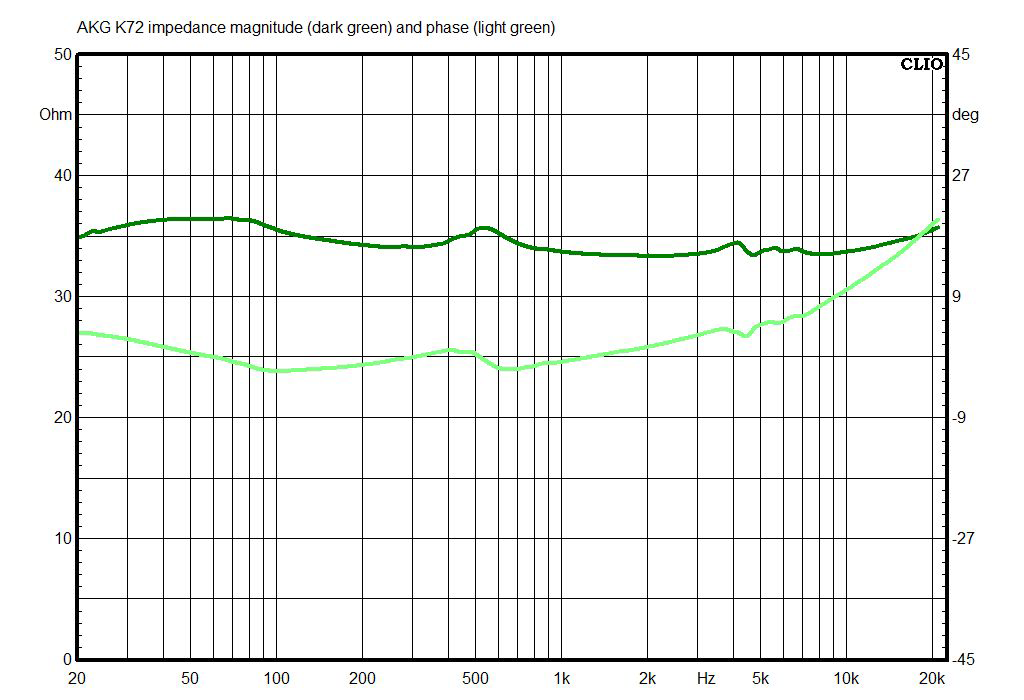 The K72 headphones’ impedance curve is surprisingly flat for dynamic-driver headphones, hovering closely around 35 ohms through the entire audioband. Impedance phase shift is mild, maxing out at +20 degrees at 20kHz.

Sensitivity, measured between 300Hz and 3kHz, using a 1mW signal calculated for 32 ohms rated impedance, is 99.2dB. That’s well below the rated 112dB, but still efficient enough that the K72s can deliver reasonably loud volume from mobile devices that have headphone jacks.

Bottom line: For most listeners, the K72s won’t sound as natural and neutral as the K371s, but they’re a third of the price! And from a technical standpoint, there’s nothing seriously amiss here.