I measured the YH-E700As using laboratory-grade equipment: a GRAS Model 43AG ear/cheek simulator/RA0402 ear simulator with KB5000/KB5001 simulated pinnae, and an Audiomatica Clio 12 audio analyzer. For isolation measurements, I used a laptop computer running TrueRTA software with an M-Audio MobilePre USB audio interface. An Mpow BH259A Bluetooth transmitter was used to send signals from the Clio 12 to the headphones. For wired measurements, the headphones were amplified using a Musical Fidelity V-CAN amplifier. These are “flat” measurements; no diffuse-field or free-field compensation curve was employed. If you’d like to learn more about what our measurements mean, click here. 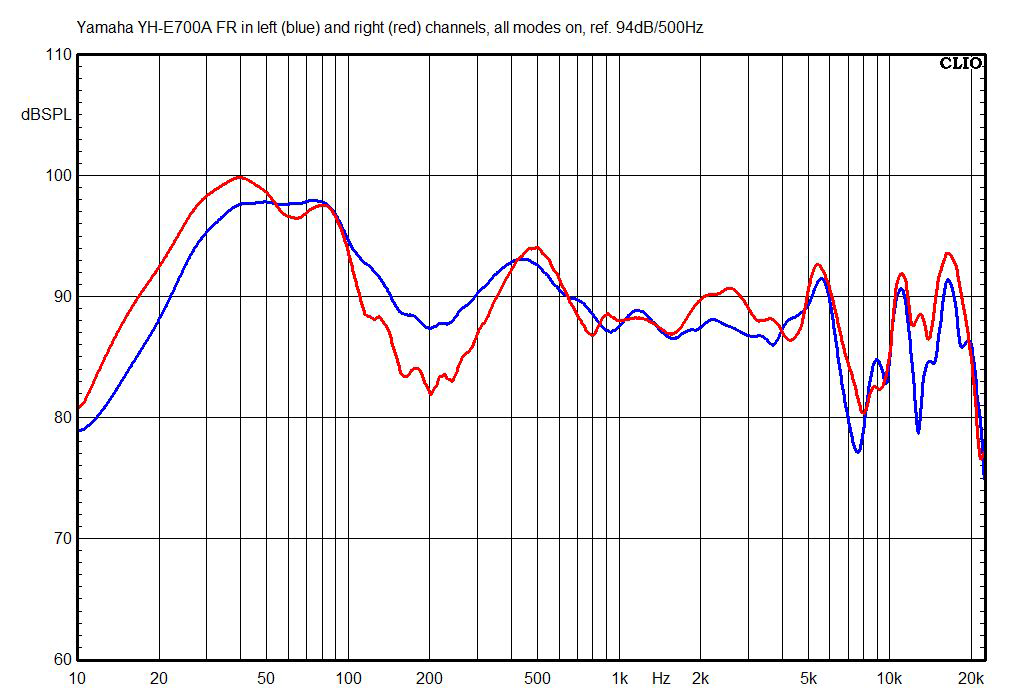 This chart shows the YH-E700As’ frequency response in Bluetooth mode with noise canceling, Listening Optimizer, and Listening Care are all activated, which I assume is the way most people will usually listen to these headphones. This is a strange-looking response at just about every frequency range. First, the bass is clearly elevated relative to the rest of the audio range. Second, there’s an unusual bump in the midrange around 500Hz. Third, the rises in response we normally see between 2 and 6kHz, which help headphones produce a sound and spatial presentation somewhat closer to that of speakers in a real room, are mostly absent. Fourth, there’s a lot more output above 10kHz than we normally see, although at present we have no research on what constitutes the “right” top-octave response in headphones because the equipment to do useful measurements in this range has become available only in the last two or three years. Fifth, no matter what I tried, I couldn’t get the response from the two channels to match well. 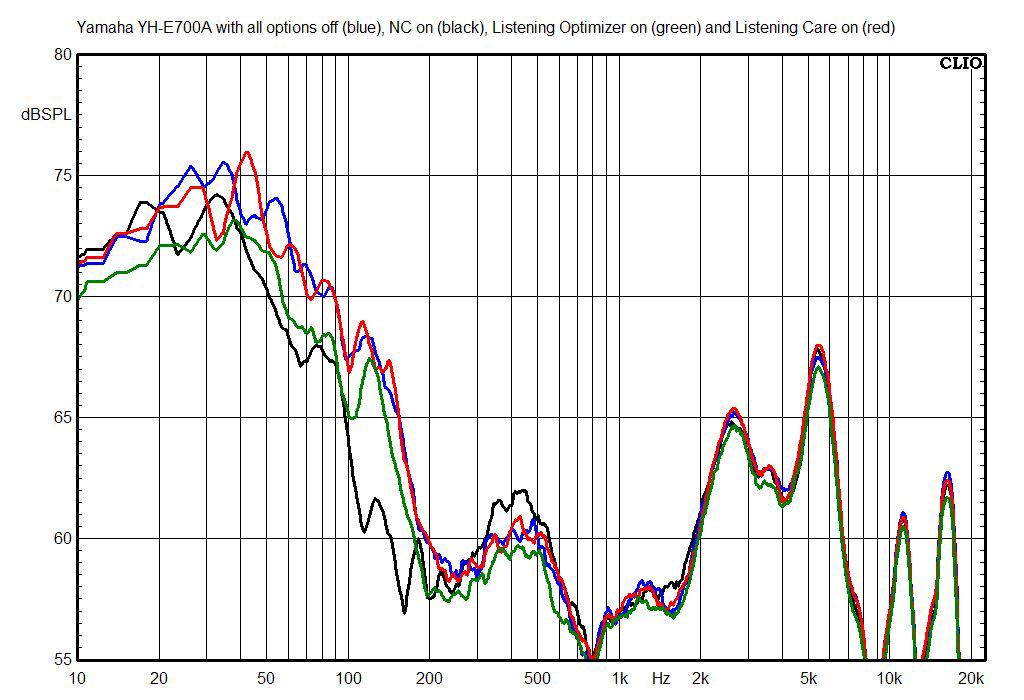 Here we can see the effect of the different listening modes: noise canceling, Listening Optimizer, and Listening Care. (Note that the Y-axis resolution is doubled so you can see the differences more easily. I also had to do this measurement by playing pink noise from my Samsung Galaxy S10 phone, so I could activate the modes using Yamaha’s Android app.) At least on the ear/cheek simulator, there’s not much difference among the different modes. Noise canceling produces a 3-to-5dB drop between 100 and 200Hz, and a 1.5-to-2dB boost between 300 and 500Hz, but otherwise, these modes seem to have little effect on the sound, which squares with my listening impressions. 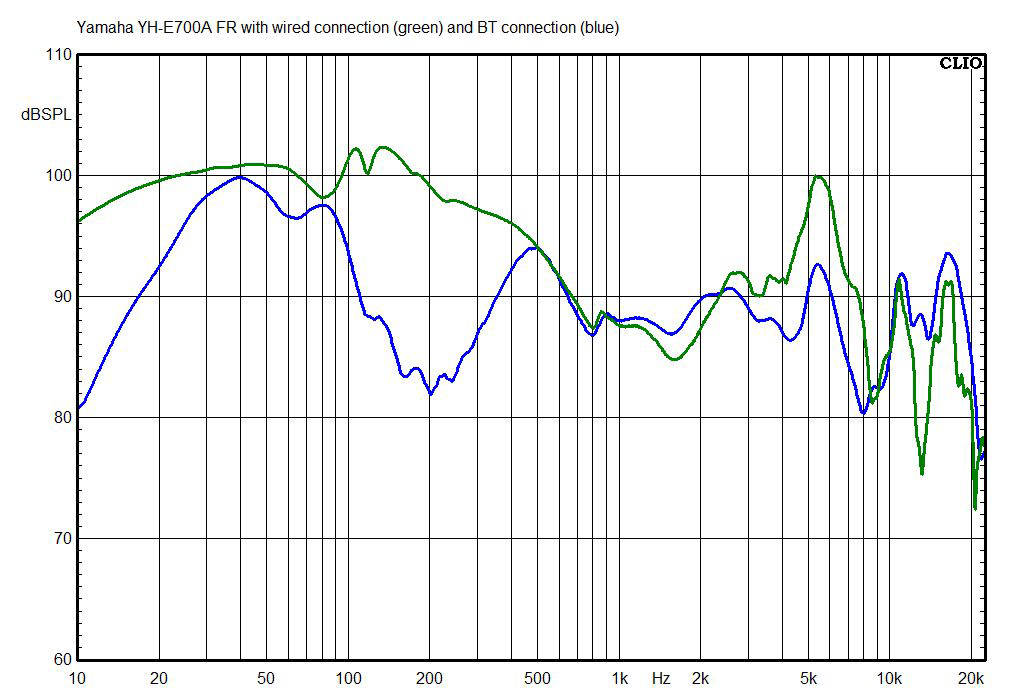 This chart shows how the Yamaha YH-E700A earphones’ tonal balance changes when they’re used in wired mode rather than Bluetooth mode (with all sound modes activated). The wired mode looks a little more like a normal headphone response, although the headphones go from having a deficit of response at 200Hz in BT mode to an overabundance of energy at 200Hz in the wired mode. We do see a narrow peak at 5kHz; if that were accompanied by a broader peak in the 2-to-3kHz range, we’d start to see (and hear) a typical headphone response. 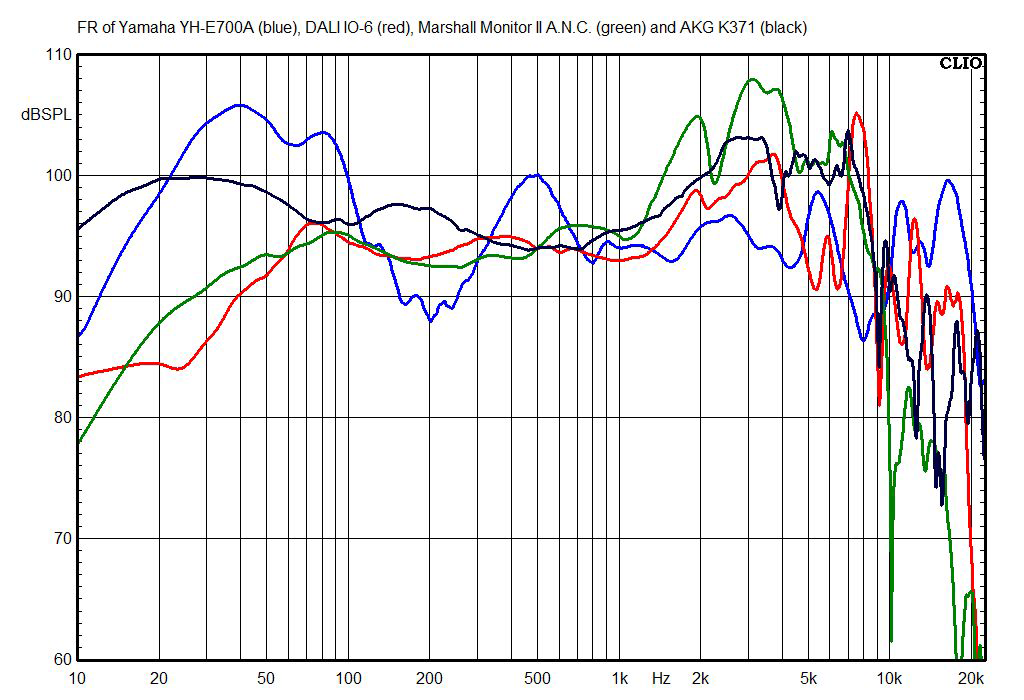 This chart shows the YH-E700As’ right-channel response (all modes activated) compared with two other noise-canceling headphones (with NC on) and the AKG K371s (headphones that come very close to the Harman curve response). I’ve already made detailed commentary above about the YH-E700As’ response anomalies, but this chart makes them even more obvious. 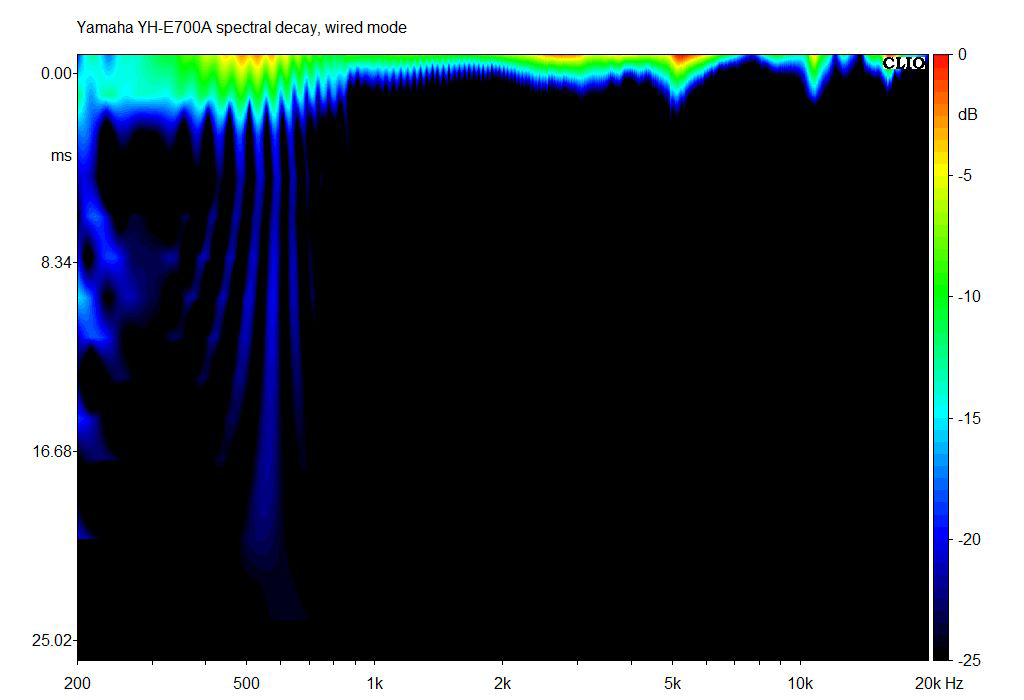 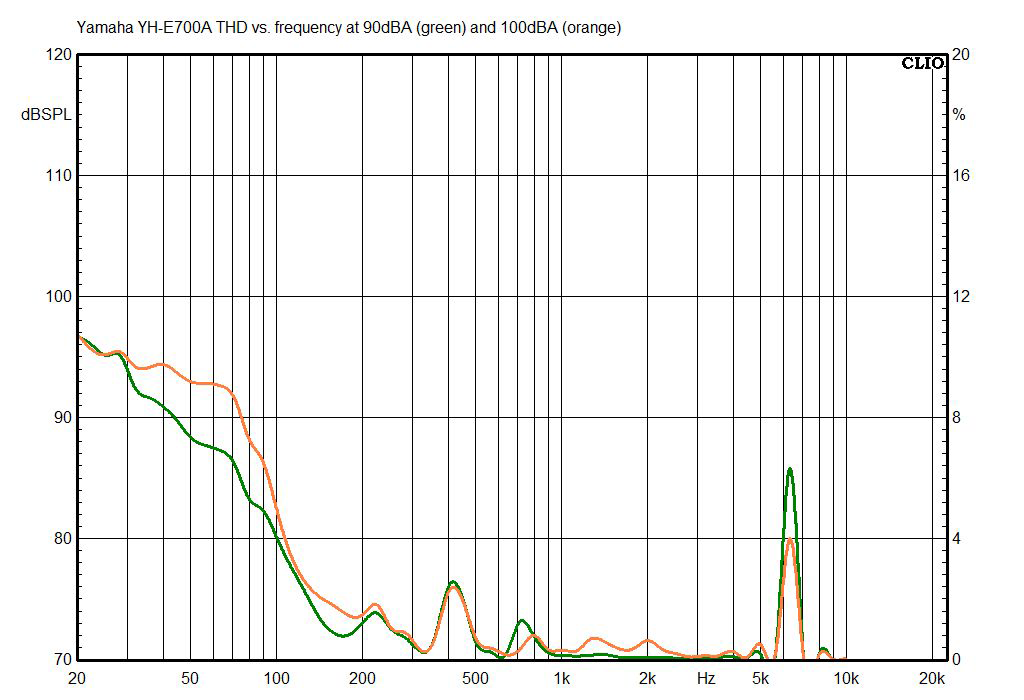 The total harmonic distortion (measured in wired mode) of the YH-E700As is generally low except in the bass, where it rises to about 8% at the extremely loud level of 100dBA. But good news—audibility of distortion is much lower at bass frequencies because your ear isn’t very sensitive there, which is why the threshold of audibility of subwoofer distortion is generally recognized to be about 10% THD. 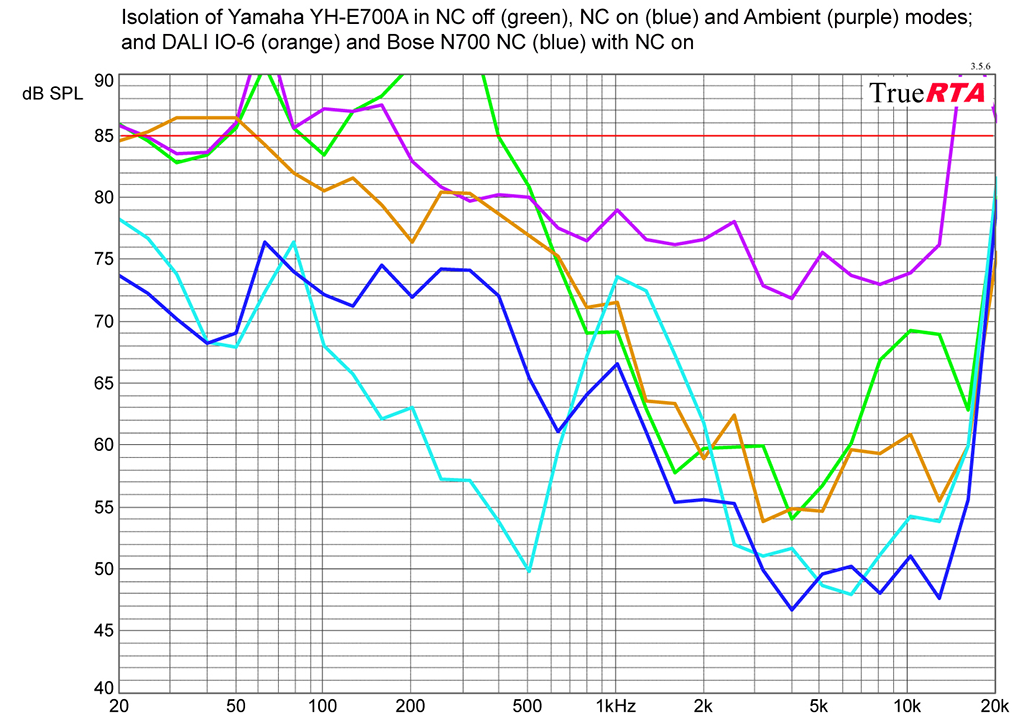 In this chart, the external noise level is 85dB SPL, and numbers below that indicate the degree of attenuation of outside sounds. The lower the lines, the better the isolation. The isolation of the YH-E700As is not bad; it’ll reduce the low droning of jet cabin noise by about 10dB, which is a useful amount (although you’ll still hear some noise). It doesn’t offer the extreme low-frequency noise canceling of the Bose N700 NC earphones, but without the Bose’s steep filter limiting the noise canceling to below 1kHz to eliminate feedback, there’s little chance the YH-E700As will produce eardrum suck. 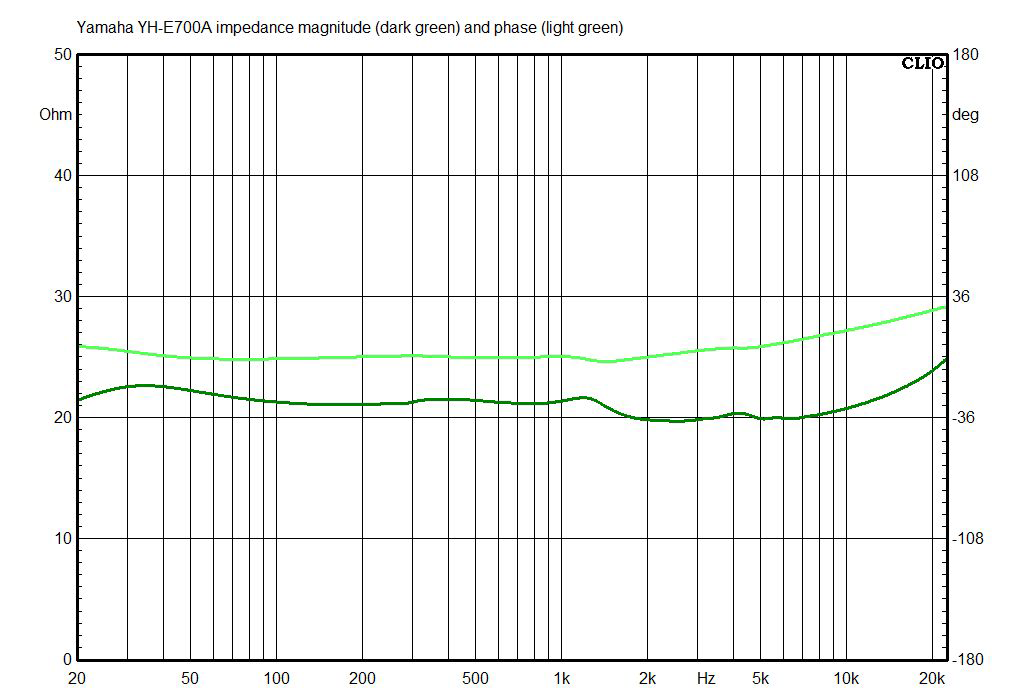 In wired mode, the YH-E700As’ impedance magnitude is fairly flat, running between 20 and 24 ohms, and the impedance phase angle is also mostly flat.

Sensitivity of the YH-E700As in wired mode, measured between 300Hz and 3kHz, using a 1mW signal calculated for 32 ohms rated impedance, is 102.5dB, so they should play reasonably loud from almost any typical source device. 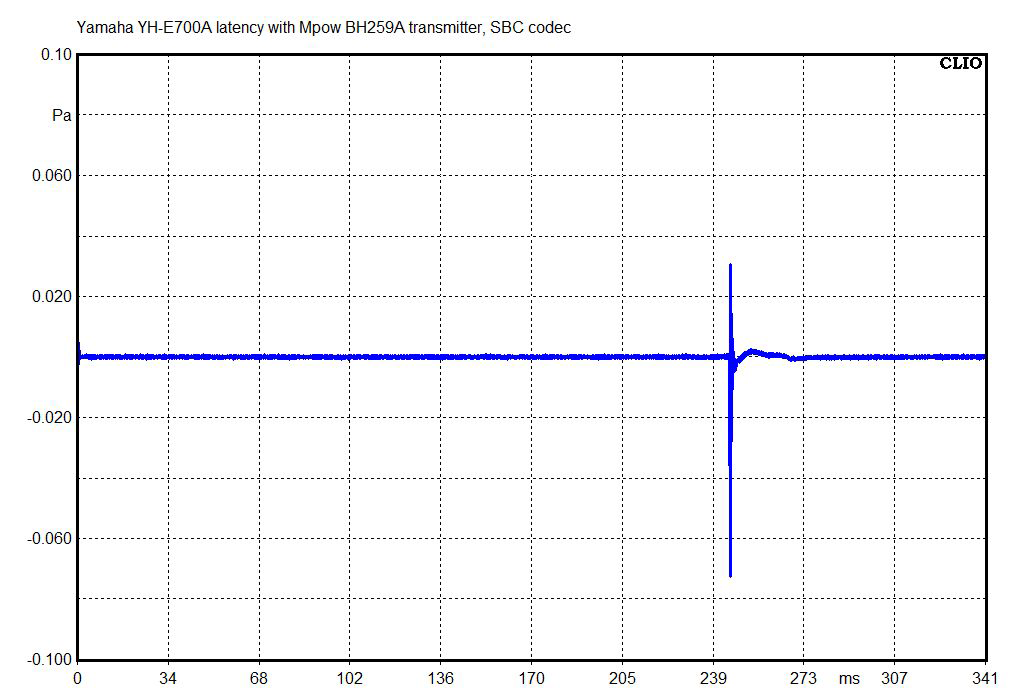 Bluetooth latency of the YH-E700As used with the Mpow BH259A transmitter is 245ms. This is puzzling to me, because the YH-E700As have aptX Adaptive, which I assume is compatible with standard aptX (which has typical latency around 125ms) and aptX Low Latency (typical latency around 35ms). The BH259A transmitter has aptX Low Latency, so I would expect to get a low-latency response from the YH-E700As. Perhaps an e-mail to Qualcomm is in order . . .

Bottom line: The YH-E700A earphones have a strange frequency-response curve, and the Listening Optimizer mode doesn’t seem to do much, if anything, to push it toward a more standard response. My measurements suggest that these headphones will not produce what we think of as a natural-sounding response. If you try these and like them, fine, but I tend to steer people toward headphones designed in accordance with scientific research and standard industry practice.