Link: reviewed by Mark Phillips on SoundStage! Solo on April 1, 2021

The Kinki Studio Vision THR-1 was conditioned for 1 hour with 2Vrms at the output (into 300 ohms) before any measurements were taken.

There were a couple peculiarities with the THR-1 that merit pointing out. The balanced inputs and outputs are not actually balanced; they are single-ended connections with balanced XLR connectors. For the XLR input, pin 1 is connected to ground, pin 2 is connected to the input, and pin 3 is connected to a 50k ohm resistor then ground. For the XLR line-level output, pin 1 is connected to ground, pin 2 to the output, and pin 3 to ground through a 100-ohm resistor. For the XLR headphone output, pins 1 and 3 are connected to the output, while pins 2 and 4 are grounded. There are no differences between Phone1 (XLR) and Phone2 (¼″ TRS, also labelled High) outputs other than the physical connectors. Pins 1/3 (L/R) from Phone1 are electrically connected to the tip/ring (L/R) of Phone2. The only difference between Phone3 (also labeled Low) and outputs Phone1 and Phone2 is that 1 and 2 have a 50-ohm output impedance, while Phone3 has a 100-ohm output impedance.

Unless otherwise specified, the balanced input connection was used for all measurements. Most measurements were done with the volume set to unity gain (about 2 o’clock), with the exception of the signal-to-noise ratio (SNR), where volume was set to maximum. Outputs 1 and 3 (Phone1 and Phone3) were used as outputs in the tables below, while Output 1 (Phone1) was used for the charts below. When used as a preamplifier (which is actually passive and just a 10k ohm potentiometer), gain (volume maximum) was measured at -0.5dB (-6.5dB for the balanced input) into the Audio Precision’s 200k ohm input load. Decreasing the input impedance of the next device in the audio chain will decrease the gain, which is the nature of a passive preamp.

The table below summarizes the measurements published by Kinki Studio for the Vision THR-1 compared directly against our own. The published specifications are sourced from Kinki Studio’s website, either directly or from the manual available for download, or a combination thereof. With the exception of frequency response, where the Audio Precision bandwidth is set at its maximum (DC to 1MHz), assume, unless otherwise stated, a measurement input bandwidth of 10Hz to 90kHz, and the worst-case measured result between the left and right channels. 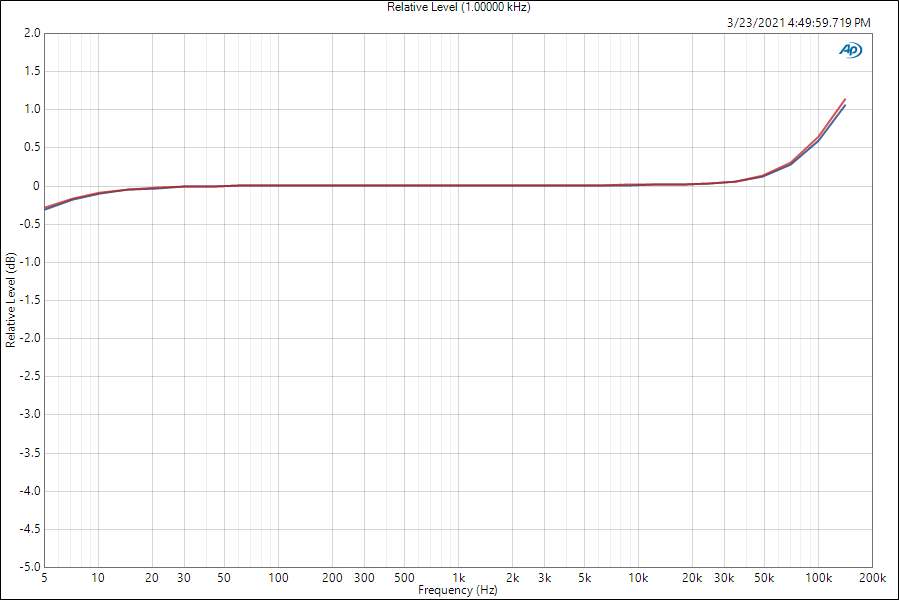 In our measured frequency response plot above, the THR-1 is essentially flat within the audioband (20Hz to 20kHz). Kinki’s claim of ±dB from 20Hz to 300kHz is not corroborated by our measurement, as the THR-1 is at +1dB at 140kHz. However, this is of zero audible consequence. The THR-1 can be considered a high-bandwidth audio device because of its high-frequency extension past 100kHz. In the chart above and most of the charts below, only a single trace may be visible. This is because the left channel (blue or purple trace) is performing identically to the right channel (red or green trace), and so they perfectly overlap, indicating that the two channels are ideally matched. 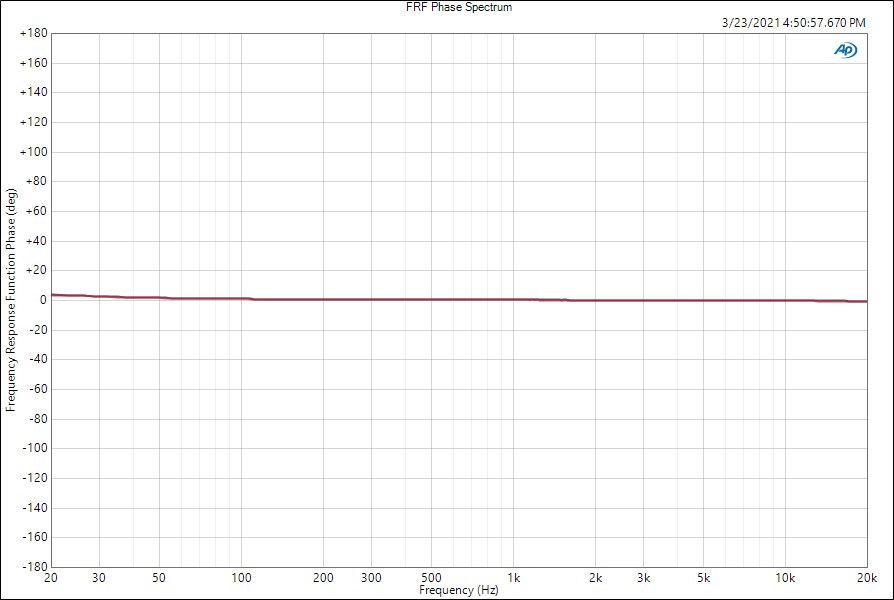 Above is the phase response plot for the THR-1 from 20Hz to 20kHz. The THR-1 does not invert polarity, and there is virtually no phase shift throughout the audioband. 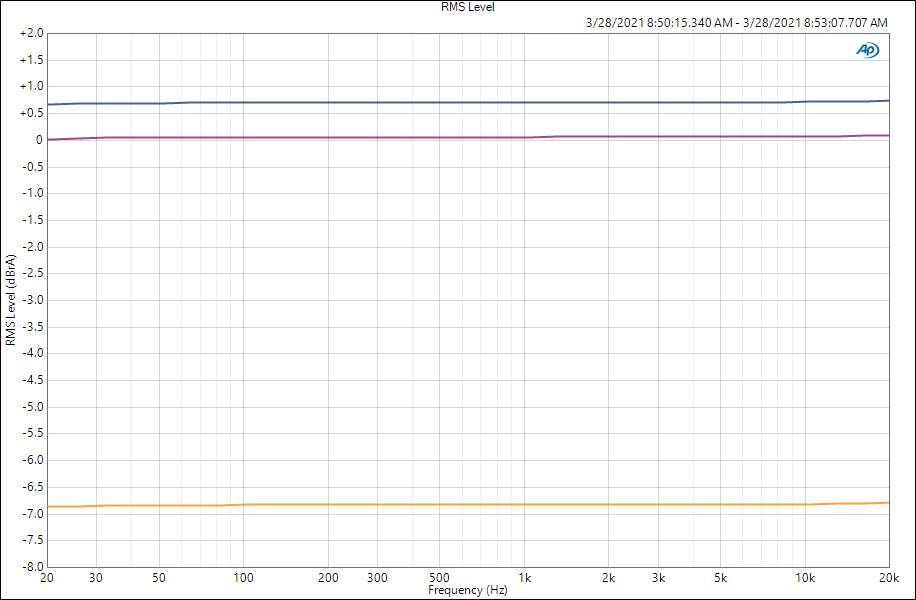 The chart above shows RMS level (relative to 0dBrA, which here is 2Vrms at the balanced output into 300 ohms) as a function of frequency for the left channel only. The blue plot is into a 600-ohm load, the purple is into a 300-ohm load, and the orange is into a 32-ohm load. Here we find a deviation of about 7.5dB between 600 ohms and 32-ohms, which is a reflection of the relatively high output impedance of 51 ohms. 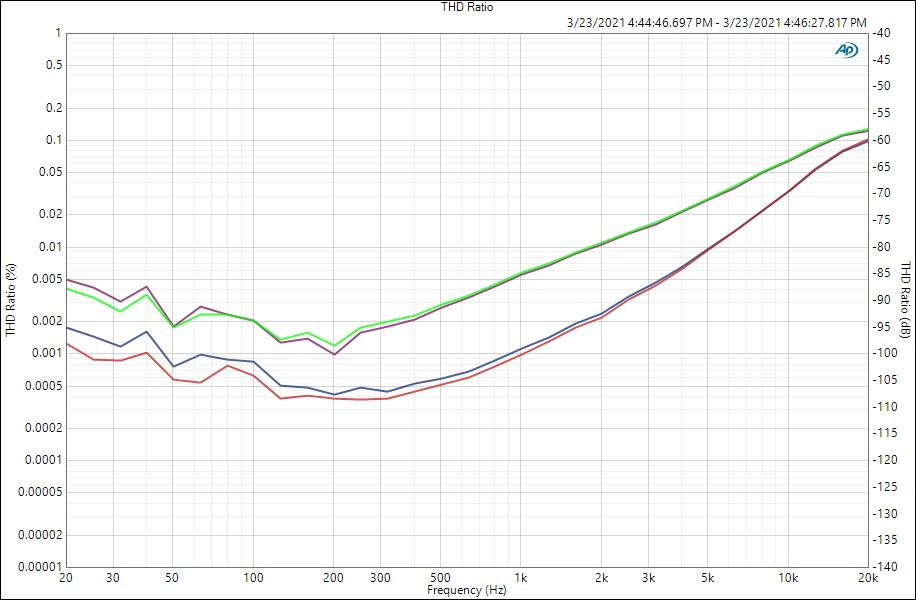 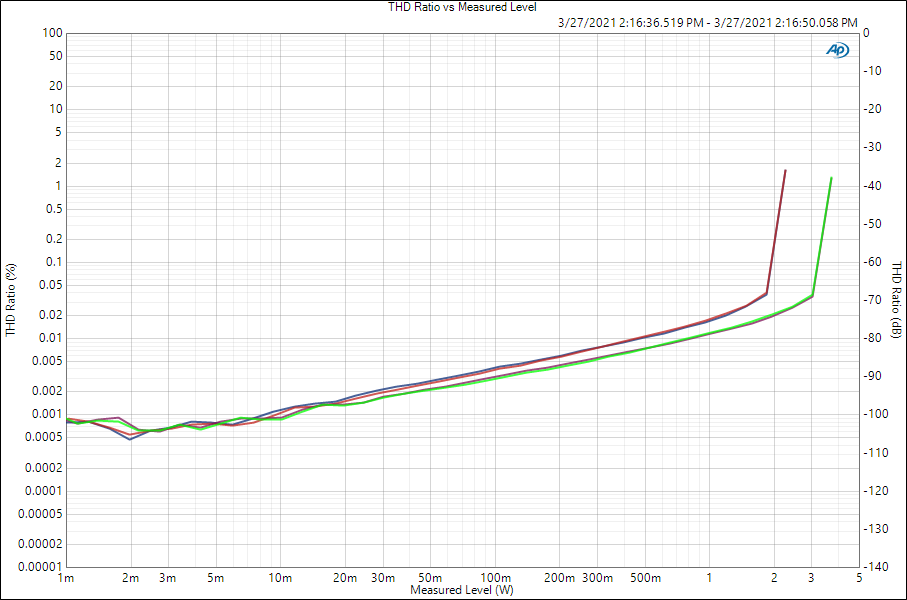 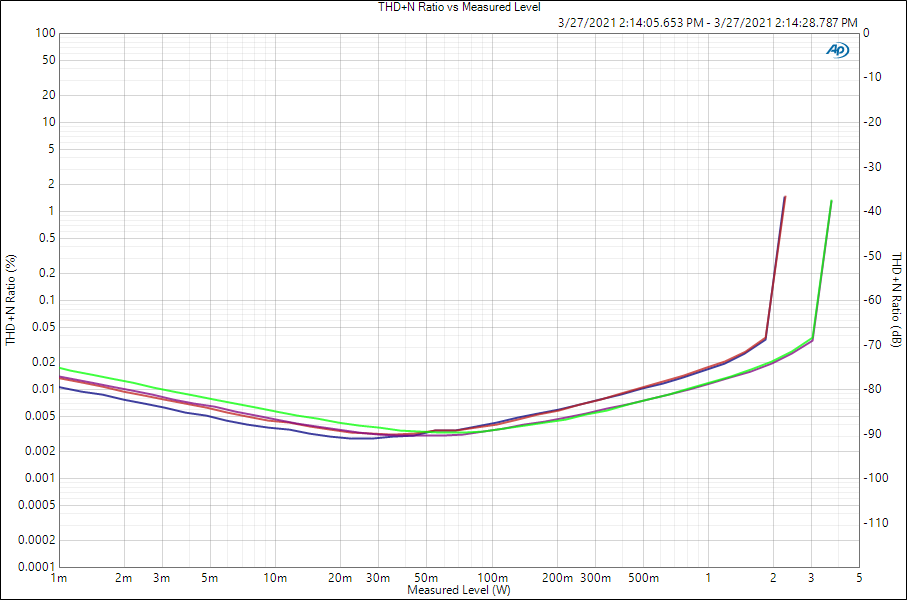 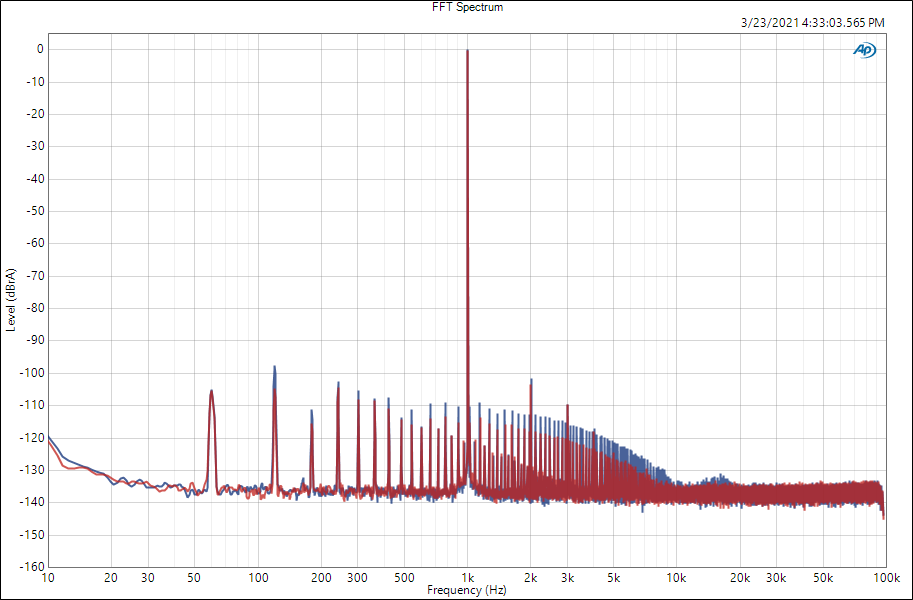 Shown above is the fast Fourier transform (FFT) for a 1kHz input sine-wave stimulus, measured at the output across a 300-ohm load at 2Vrms. We see that the second harmonic, at 2kHz, is just below -100dBrA, or 0.001% (relative to the reference 0dB signal), while the third harmonic, at 3kHz, is at -110dBrA, or 0.0003%. The fourth and fifth harmonics are even lower, and are difficult to distinguish amongst the power-supply-noise harmonic peaks. Below 1kHz, we see noise artifacts, from the 60Hz fundamental at -105dBrA and the second harmonic at 120Hz at -100dBrA (left) and -105dBrA (right), as well as a long series of visible higher harmonics between -105 and -120dBrA. 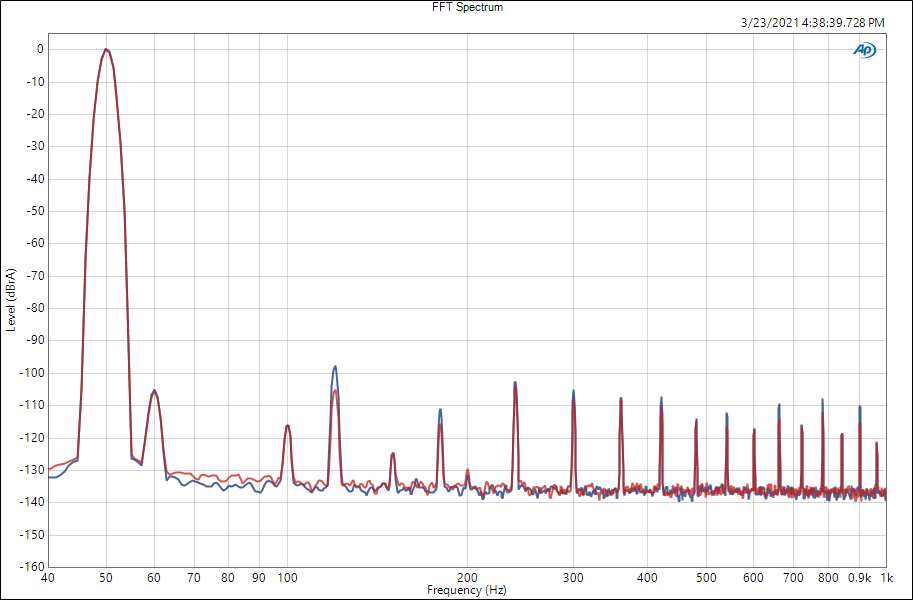 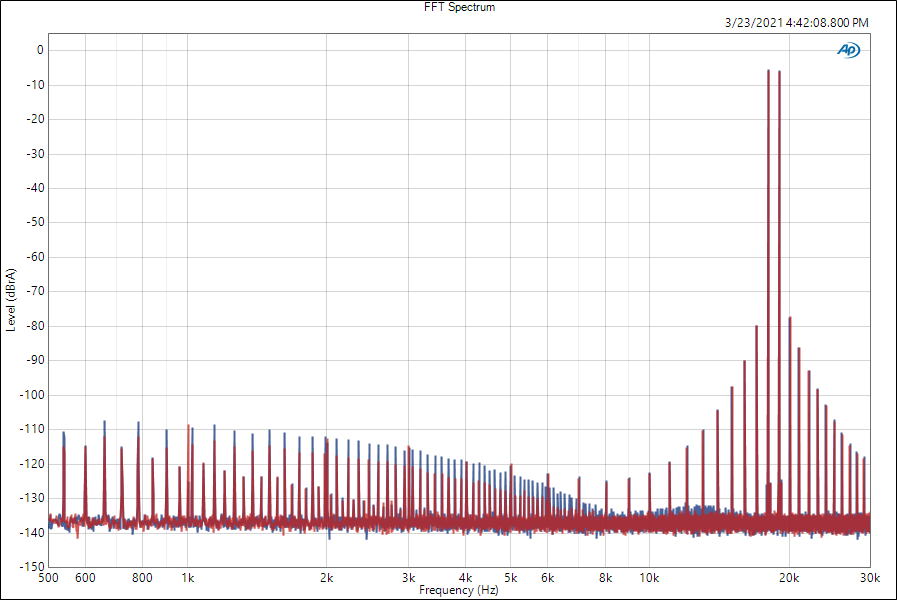 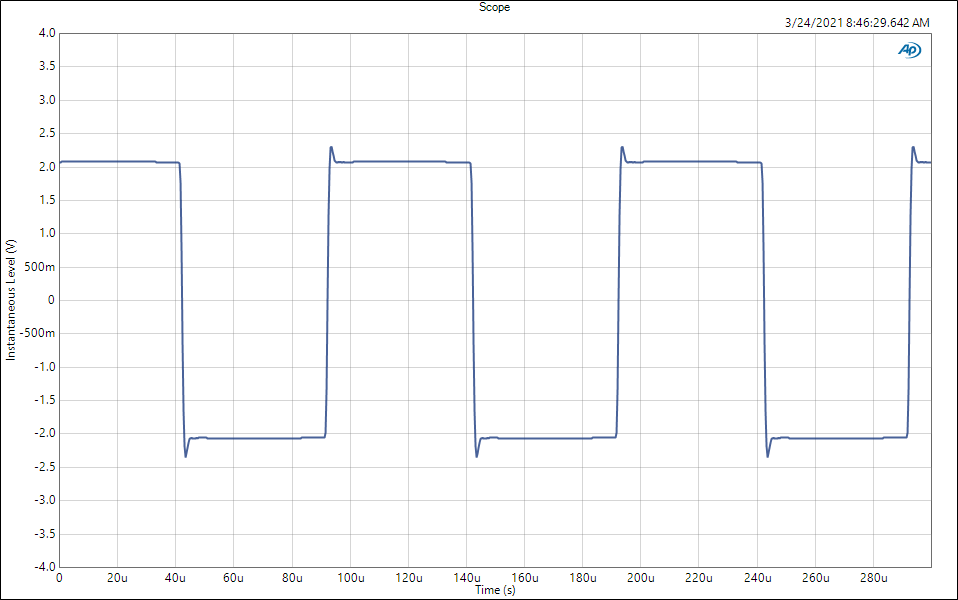 Above is the 10kHz square-wave response of the THR-1 into 300 ohms. Due to limitations inherent to the Audio Precision APx555 B Series analyzer, this graph should not be used to infer or extrapolate the THR-1’s slew-rate performance. Rather, it should be seen as a qualitative representation of the THR-1’s extended bandwidth. An ideal square wave can be represented as the sum of a sine wave and an infinite series of its odd-order harmonics (e.g., 10kHz + 30kHz + 50kHz + 70kHz . . .). A limited bandwidth will show only the sum of the lower-order harmonics, which may result in noticeable undershoot and/or overshoot, and softening of the edges. In the case of the THR-1, the square wave is reproduced cleanly, with mild overshoot and undershoot, which can be seen by the triangular-shaped spikes in the corners of the transitions.