I measured the Between Pros using laboratory-grade equipment: a GRAS Model 43AG ear/cheek simulator with the RA0402 high-resolution ear simulator with KB5000/KB5001 simulated pinnae, and a Audiomatica Clio 12 audio analyzer (recently upgraded from the Clio 10 FW I’ve been using since 2011). For isolation measurements, I used a laptop computer running TrueRTA software with an M-Audio MobilePre USB audio interface. An Mpow BH259A Bluetooth transmitter was used to send signals from the Clio 12 to the earphones. These are “flat” measurements; no diffuse-field or free-field compensation curve was employed. Note that because of the latency introduced by Bluetooth, I wasn’t able to do a spectral-decay measurement, and of course my usual impedance and sensitivity measurements are irrelevant for wireless earphones. If you’d like to learn more about what our measurements mean, click here. 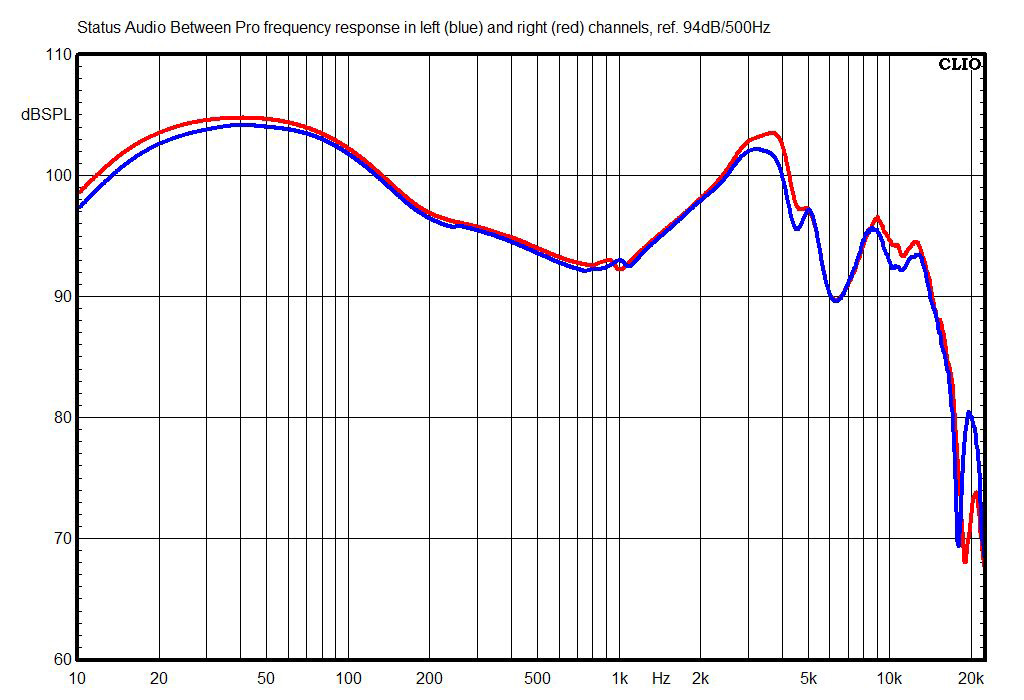 The above chart shows the Between Pros’ frequency response measured with the RA0402 ear simulator. This is a fairly standard-looking curve except for one thing: the lower-treble response peak is centered at about 3.8kHz, which is fairly high. Somewhere between 2 and 3kHz would be more typical. I suspect the relatively high frequency of this peak is what sometimes made voices sound a bit exaggerated in their upper harmonics. Note also that while Status Audio’s claims about the bass response are true—the rise in the bass occurs primarily below 200Hz—the bass bump is fairly high relative to the midrange, which would likely make these sound a little bassy. So the measurements (which were done after the review text was submitted) do reflect the earphones’ subjective audio characteristics, contrary to what dudes on the Internet who’ve never done an audio measurement in their lives may tell you.

The impulse response shows that the latency with the aptX-capable Mpow BH259A is 216ms, which is typical for the standard SBC codec, and higher than the roughly 120ms I would expect to measure with aptX. My guess is that the test sample I have was produced before the company added aptX and AAC. 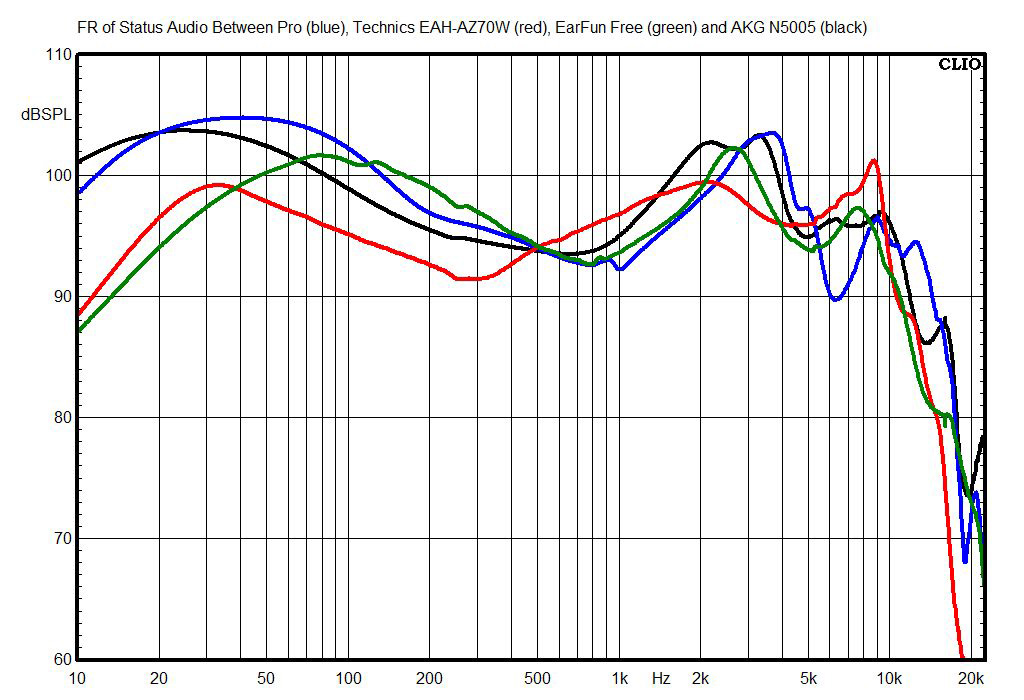 This chart shows the Between Pros’ right-channel response compared with the EarFun Free and Technics EAH-AZ70W true wireless earphones, as well as with the AKG N5005s, the passive earphones said to best reflect the Harman curve. You can see that the Between Pros are pretty close to the Harman curve, with about 3dB more bass output on average, and about 5dB less output at 2kHz. 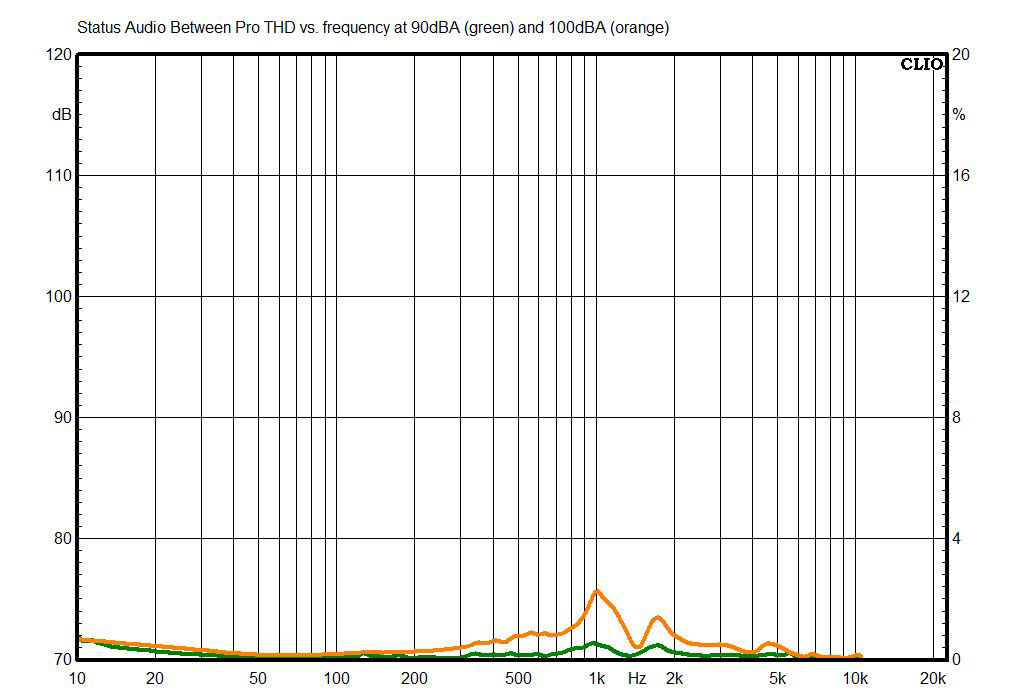 Fortunately, the new Clio 12 analyzer software can produce distortion measurements despite Bluetooth’s latency, so I no longer have to present the THD vs. frequency measurements as a Google chart. The Between Pros’ distortion is near zero at the loud level of 90dBA (measured with pink noise), and at the extremely loud level of 100dBA, reaches only about 2% in a small peak centered at 1kHz. So basically, these earphones can’t produce audible distortion, and unlike some true wireless models, they can reach 100dBA with pink noise. 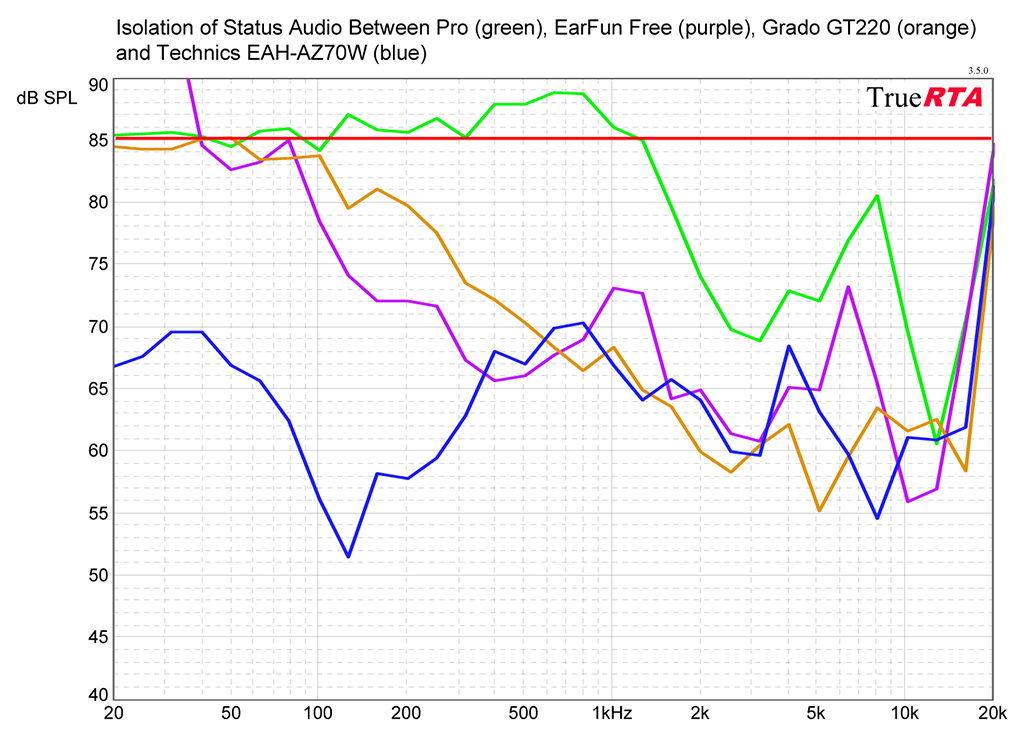 This chart shows the Between Pros’ isolation versus three other true wireless earphones—the EarFun Free, the Grado GT220, and the Technics EAH-AZ70W (which have outstanding active noise canceling). The same slim, non-ear-filling design that makes the Between Pros so easy to seal securely in the ear canal also limits the amount of sound they can block below 1kHz, so these wouldn’t be a good choice for places where there’s lots of low-frequency noise, such as airplane cabins.

Bottom line: The Between Pro earphones have bit of a “smiley” (bass- and treble-boosted) response, but it’s pretty close to industry norms, and unless you want lots of isolation from external sounds, there’s nothing in the measurements that should give you pause.