Link: reviewed by Doug Schneider on SoundStage! Hi-Fi on January 1, 2021

The Bellari VP549 was conditioned for 30 minutes at 1Vrms at the output before any measurements were taken.

The VP549 is designed for moving-magnet (MM) cartridges only and has one set of single-ended RCA inputs and outputs. There are two switches and one knob on the front panel of the VP549. One switch selects between 120pF, 220pF, and 330pF cartridge-loading capacitance. The other switch, Rumble Filter, enables a low-frequency filter that provides attenuation below 20Hz. The knob controls the preamp’s overall gain. The center position is labelled “0,” the minimum position “-10dB,” and the maximum position “+4dB.” Unless otherwise stated, measurements were performed with the cartridge load capacitance set to 220pF, the Rumble Filter switch disengaged, and the gain set to the default “0” position. An 8mVrms 1kHz sinewave was required to achieve the reference output voltage of 1Vrms.

The table below summarizes our primary measurements performed on the VP549. Here we can compare directly against Bellari’s own published specifications for the VP549, which are stated as follows:

For the remainder of the specifications, as is often the case with manufacturer supplied measurements, not enough information is given to directly reproduce their results. With respect to Bellari’s THD of 0.005%, the company has not specified a reference output voltage, gain setting, weighting, or bandwidth filter. Our THD measurement shows an even lower <0.0012% (unweighted) against a 1Vrms output voltage, whereas our THD+N figure (A-weighted) is <0.0063% for both channels.

Bellari’s signal-to-noise ratio (SNR) of >94dB (unweighted) seems generous, however, again, we have very little information provided with respect to measurement parameters. The most charitable SNR measurement we could achieve was with the gain setting at -10dB and the output voltage at 1.35 Vrms (1 kHz), where we measured 95dB (A-weighted). Our reference SNR measurement (1Vrms output, gain set to 0) is 83dB (A-weighted), or 60dB (unweighted, input bandwidth filter set from 20Hz to 20kHz). 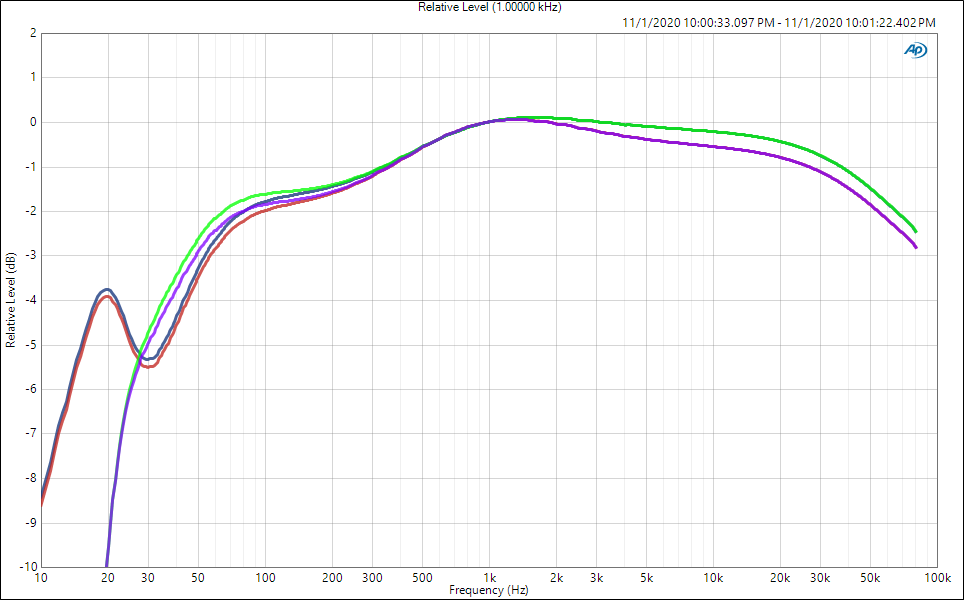 The chart above shows our frequency response measurement. An inverse RIAA EQ is applied to the input sweep, so that if a device were to track the RIAA curve perfectly, a flat line would emerge. The blue and red curves are the left and right channel without the Rumble Filter switch engaged, the green and purple curves with the Rumble Filter switch engaged. The measurement was also made with the gain set to its minimum and maximum values, and with every cartridge load capacitance setting, which had no effect on the frequency-response results. We can see here that Bellari’s claim of +/-1dB is valid at the top end of the spectrum (up to 23kHz as stated), but the +/-1dB claim down to 14Hz was not corroborated by our measurement. We find a -5.3dB dip at 30Hz, and at 14Hz, down -5.5dB again. In the graph above and some of the graphs below, we see two visible traces; the left channel (blue or purple trace) and the right channel (red or green trace). On other graphs, only one trace may be visible, this is because the left and right channels are tracking extremely closely, so as not to show a difference with the chosen axis scales. 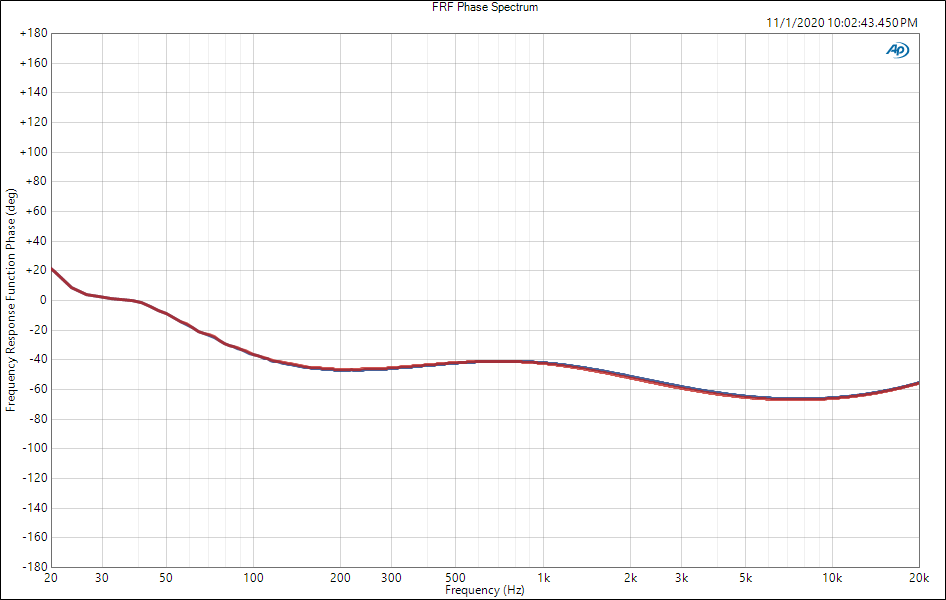 Shown above is the phase response from 20Hz to 20kHz. The VP549 does not invert polarity. Since phono preamplifiers must implement the RIAA equalization curve, which ranges from +19.9dB (20Hz) to -32.6dB (90kHz), phase shift at the output is inevitable. Here we find a worst case +20 degrees at 20Hz, and just below -60 degrees between 5 and 10kHz. 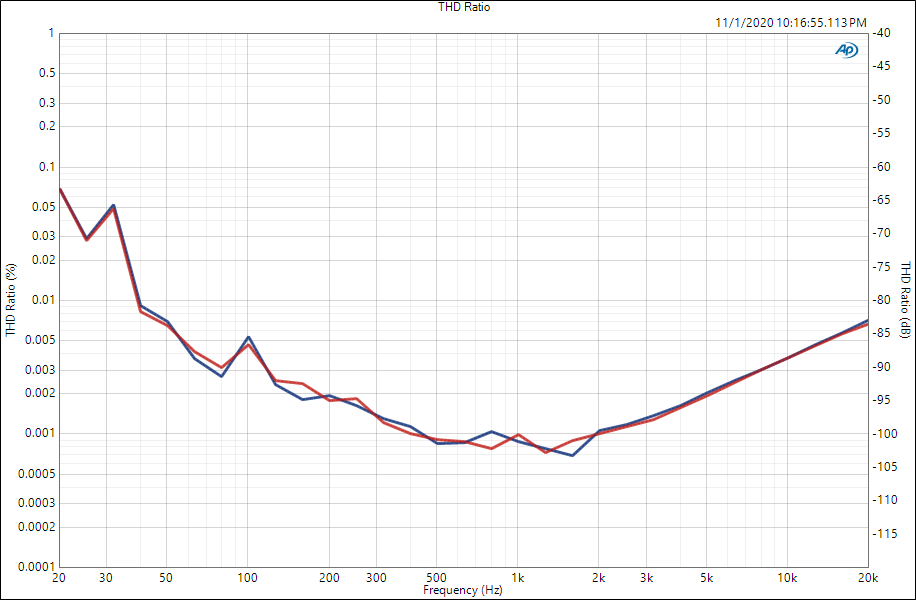 The chart above is the THD ratio as a function of frequency, where the input sweep is EQ’d with an inverted RIAA curve. The output voltage is maintained at the refrence 1Vrms. The THD values vary from 0.05% at 20Hz, down to below 0.001% at 1kHz, then back up to 0.007% at 20kHz. 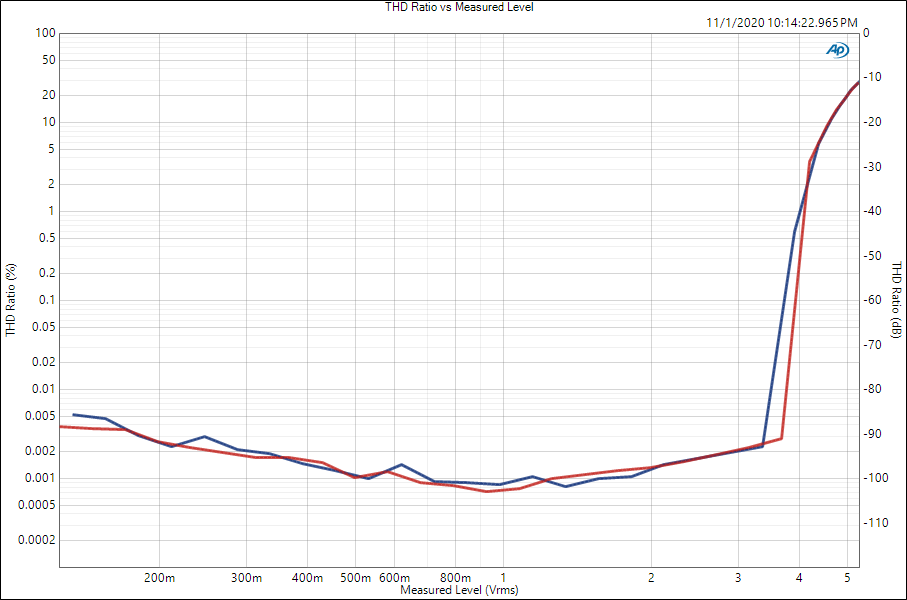 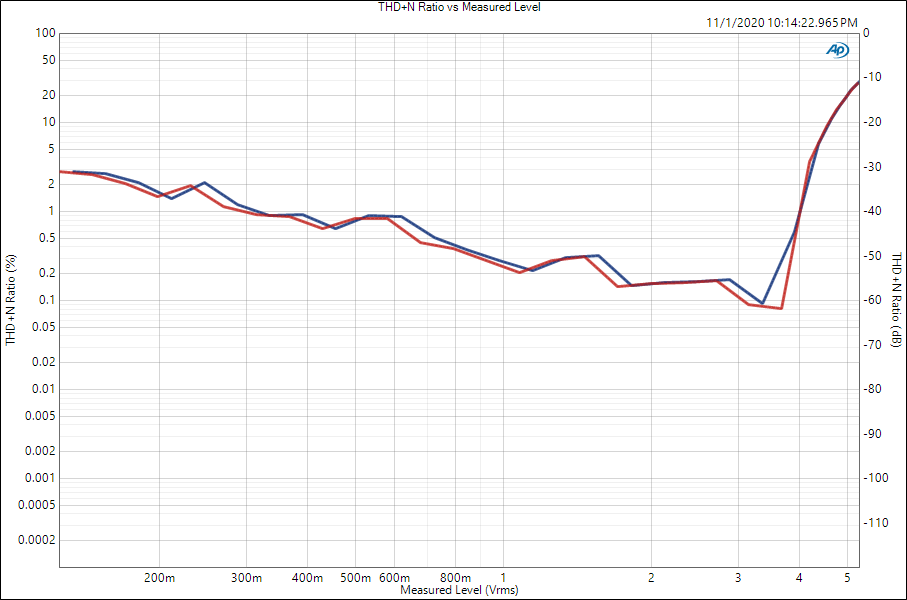 Above we can see a plot of THD+N ratio as a function of output voltage. At 100mVrms, THD+N values are at around 3%, then down to between 0.1 and 0.2% at 3Vrms. There is a considerable difference in the THD+N vs. THD plots for the VP549, where it’s clear that distortion products are low, but noise, as shown in this chart, is relatively high. 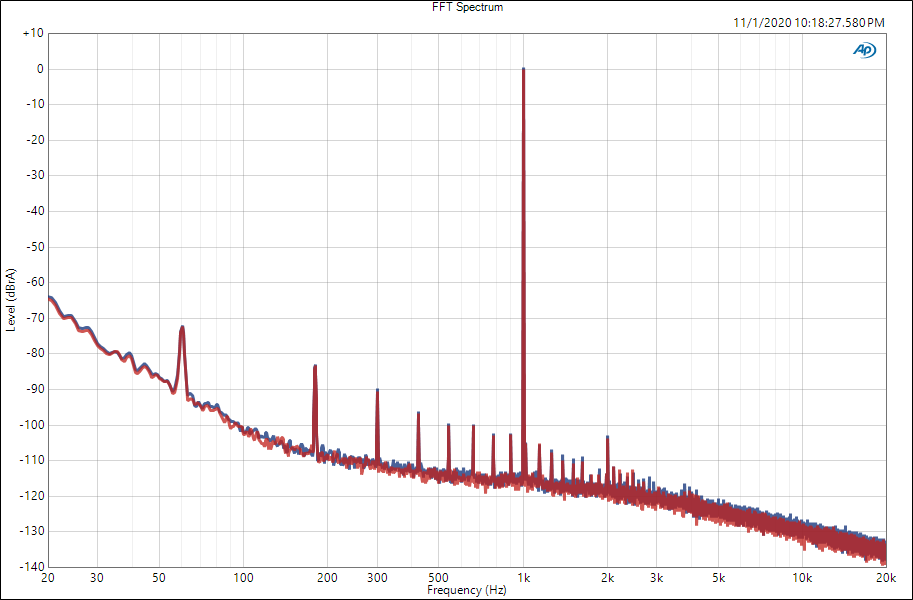 Shown above is a fast Fourier transform (FFT) of a 1kHz 8mVrms input sinewave stimulus, which results in the reference output voltage of 1Vrms with the gain set to 0. Here we see that the second harmonic at 2kHz is <-100dB below the reference signal (dBrA). The frequency components on the left side of the 1kHz peak are mostly due to power supply noise. Of note is the peak at 60Hz at a level near -70dBrA. 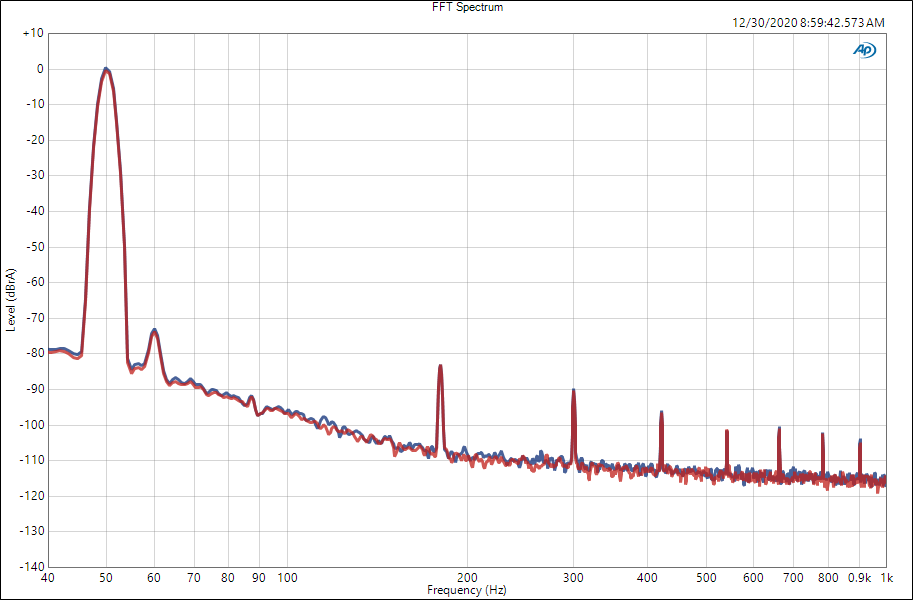 The chart above is an FFT of a 50Hz input sinewave stimulus, which results in the reference output voltage of 1Vrms with the gain set to 0. The X axis is zoomed in from 40Hz to 1kHz, so that peaks from noise artifacts can be directly compared against peaks from the harmonics of the signal. We find no perceptible signal harmonic peaks (e.g., 100Hz, 150Hz) above the relatively high noise floor. The highest noise peak is from the primary source (60Hz) at about -75dBrA, while the next highest peak is from the third harmonic noise peak (180Hz) at about -85dBrA. 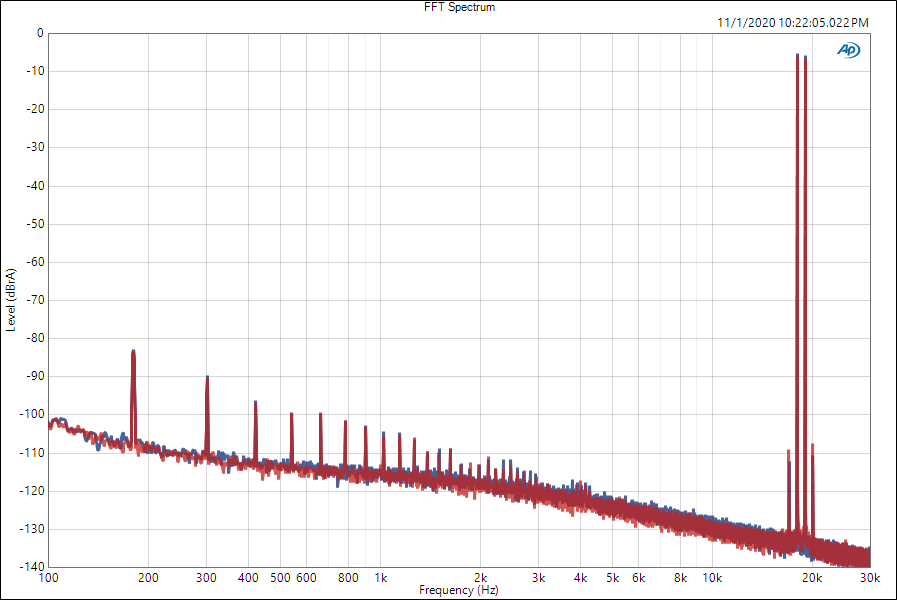 This final chart shows an FFT of the IMD products for an 18kHz and 19kHz summed sinewave stimulus tone. The input rms values are set so that if summed (for a mean frequency of 18.5kHz) would yield 1Vrms (Reference or 0dBRa) at the output. Although it appears that the second-order modulation product (i.e., the difference signal of 1kHz) is sitting at -105dBrA, the peak is actually at 1020Hz, which is the 17th harmonic from the 60Hz power-supply noise. The 1kHz IMD peak is imperceptible above the noise floor. The third-order modulation products (i.e., 17kHz and 20kHz) are just above -110dBra, and the subsequent modulation products are not noticeable.