I measured the Melomania 1 earphones using laboratory-grade equipment: a G.R.A.S. Model 43AG ear/cheek simulator/RA0402 ear simulator with KB5000/KB5001 simulated pinnae, and a Clio 10 FW audio analyzer. For isolation measurements, I used a laptop computer running TrueRTA software with an M-Audio MobilePre USB audio interface. A MEE Audio Connect Bluetooth transmitter was used to send signals from the Clio 10 FW to the earphones. These are “flat” measurements; no diffuse-field or free-field compensation curve was employed. Note that because of the latency introduced by Bluetooth, I wasn’t able to do a spectral decay measurement, and of course my usual impedance and sensitivity measurements are irrelevant for wireless headphones. If you’d like to learn more about what our measurements mean, click here. 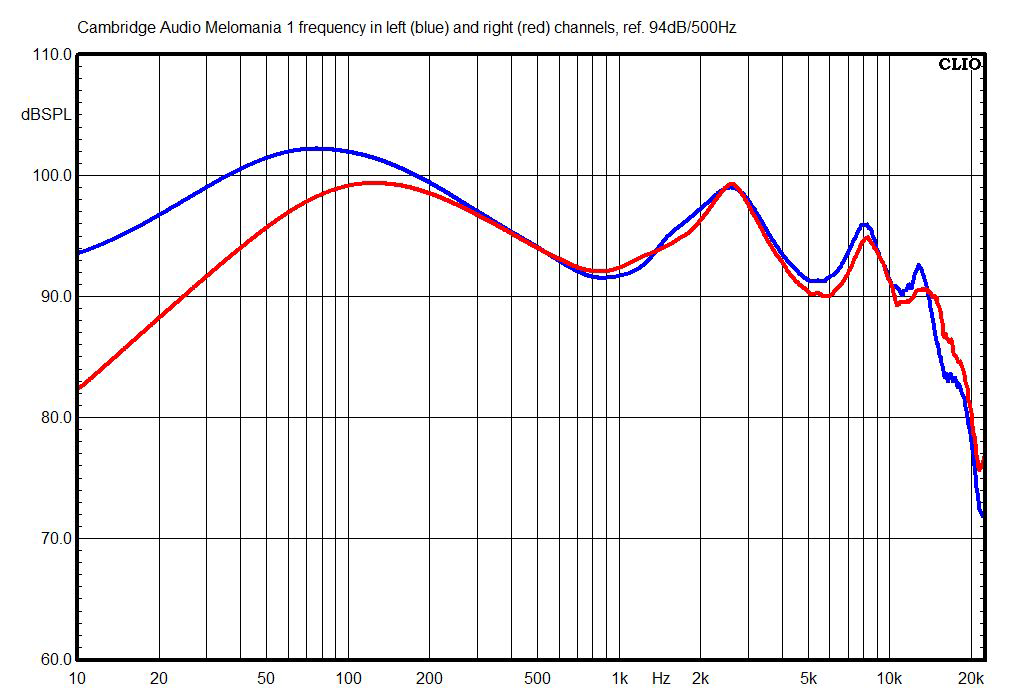 The above chart shows the Melomania 1s’ frequency response measured with the KB5000 and KB5001 anthropomorphic simulated pinnae. This is a fairly standard response for earphones, with a large peak centered at 2.6kHz and a smaller one centered at 8kHz. The unusual aspect of it is that the bass response in the two earphones seems to be different -- something we sometimes see in active headphones and earphones, because the bulk of the internal electronics sometimes changes the acoustics. (This result held up through repositionings and remeasurements of the two earphones.) According to my measurements, the bump is centered at about 120Hz in the right channel, and 80Hz in the left channel. The 120Hz bump is consistent with our impressions that the bass is a little bloated; pushing the bump down to 80Hz or lower tends to reinforce the bass without making it sound bloated. The impulse response (from which the Clio derives the frequency response) shows that the latency with the MEE Connect is 320ms. This is a high number, but true wireless earphones usually have a lot of extra latency. However, because the MEE Connect and the Melomania 1s both have aptX, and Cambridge Audio’s spec is 70ms, I’d expect this to be a lot lower. This long latency is no problem for music listening, but it will create lip-sync problems with video content and will create lag problems when playing some video games. 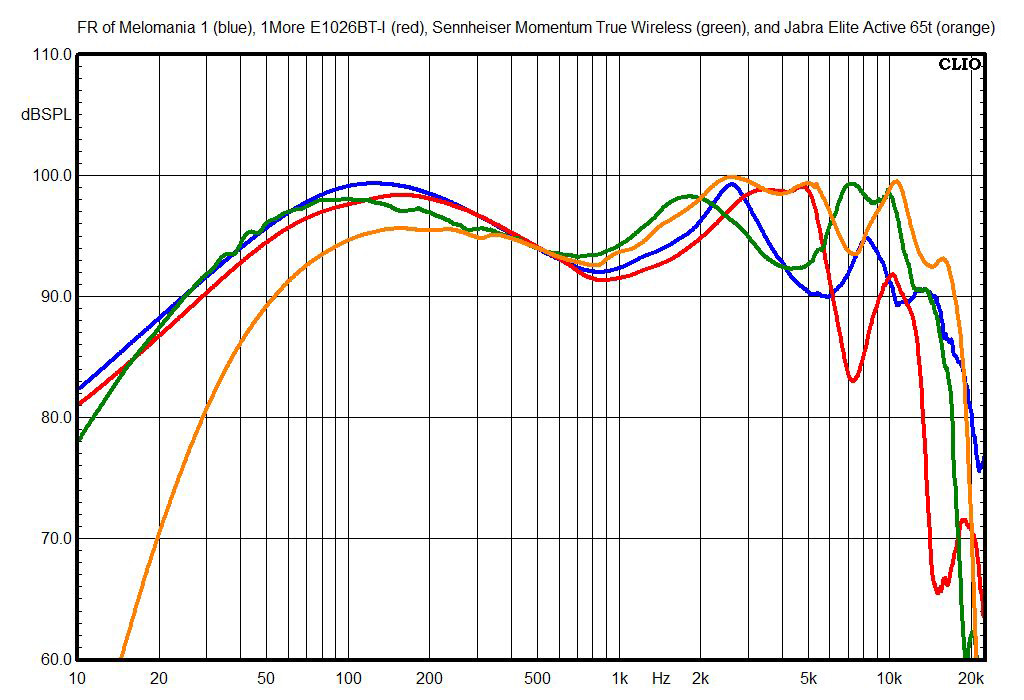 This chart shows the Melomania 1s’ right-channel response compared with the 1More E1026BT-I, Sennheiser Momentum True Wireless, and the Jabra Elite Active 65t earphones. The Melomania 1s are pretty much in the ballpark with the rest of them, except for a little less overall treble energy. 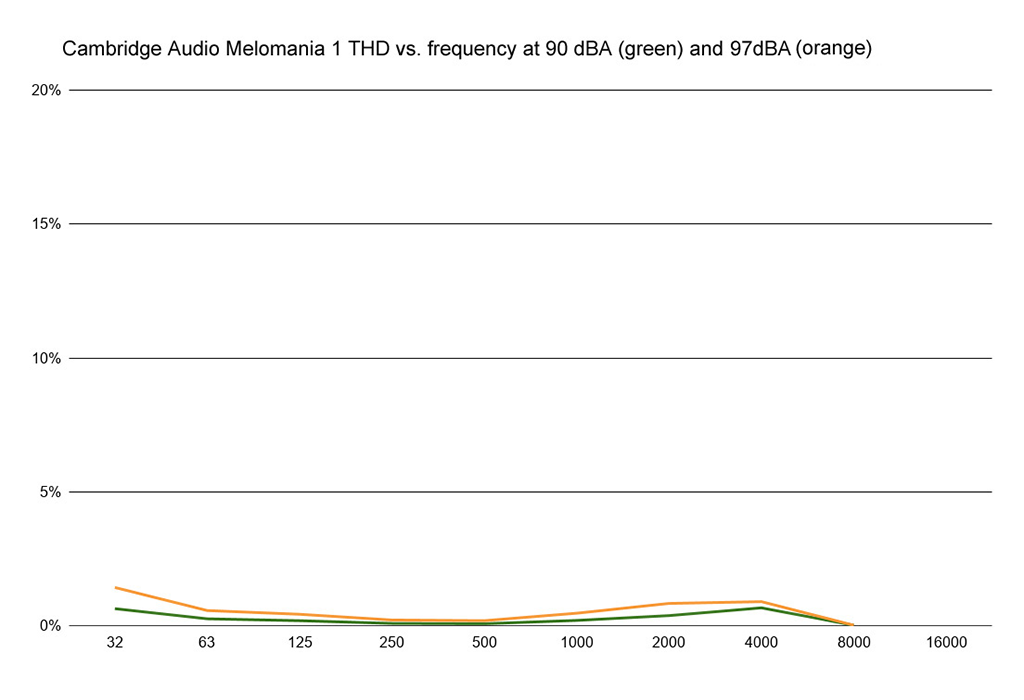 Because of the latency of the Bluetooth connection, I could not use Clio’s sine sweep function to measure total harmonic distortion (THD) versus frequency, so I did discrete THD measurements of sine tones in one-octave steps. This is a little more demanding than a swept tone because the tones have to play longer and the voice coil in the driver gets a lot hotter. Normally I take this measurement by setting levels at 90 and 100dBA using pink noise, but the Melomania 1s wouldn’t play at 100dBA; the best they could muster was 97dBA (which is still very loud). Regardless, the distortion is very low at all frequencies. 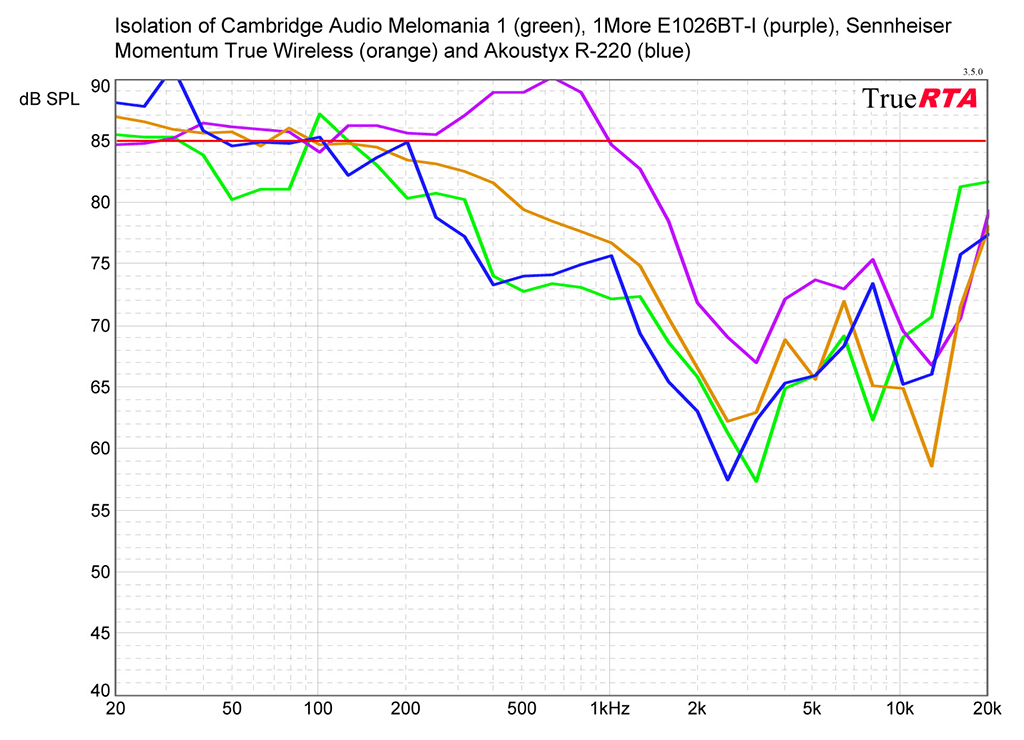 In this chart, the red line indicates an external noise level is 85dB SPL, and numbers below that indicate the degree of attenuation of outside sounds. The Melomania 1s’ isolation is above average, comparable to that of the very secure-fitting Akoustyx R-220s.