I measured the Elegias using a G.R.A.S. Model 43AG ear/cheek simulator/RA0402 ear simulator, a Clio 10 FW audio analyzer, a laptop computer running TrueRTA software with an M-Audio MobilePre USB audio interface, and a Musical Fidelity V-CAN amp, with an Audio-gd NFB-1AMP used for distortion measurements. On the Model 43AG, I used the new KB5000 anthropomorphic simulated pinna for most measurements, and the original KB0065 pinna for certain other measurements, as noted. These are “flat” measurements; no diffuse-field or free-field compensation curve was employed. 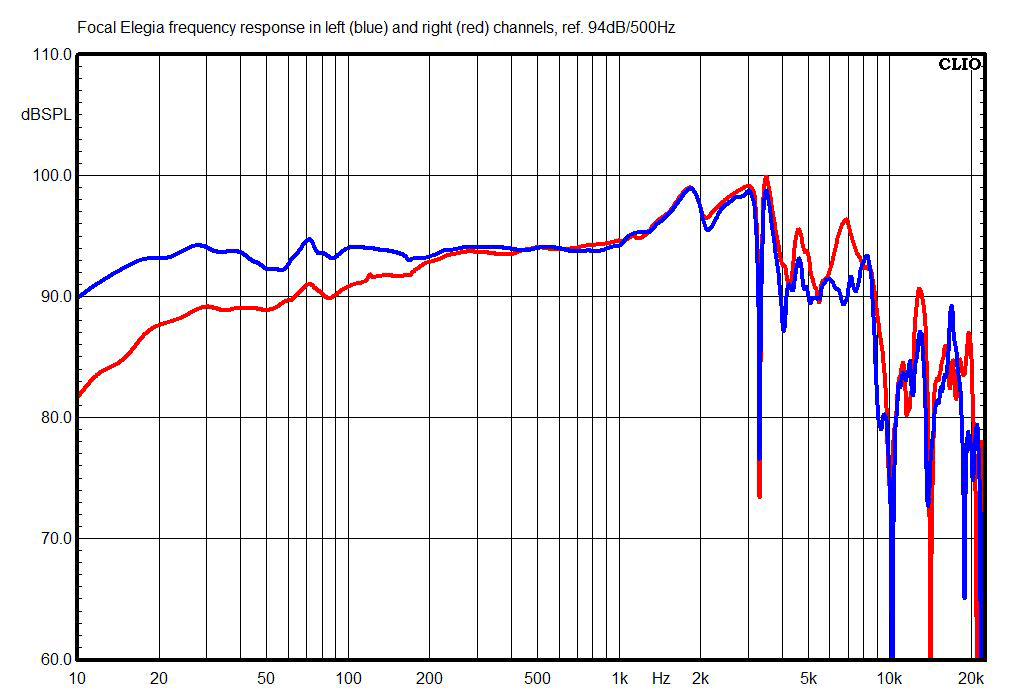 The above chart shows the Elegias’ frequency response measured with the new KB5000 and KB5001 anthropomorphic simulated pinnae. This is the best match I was able to achieve between the left and right channels. They match very closely in the midrange, where it counts most. There is a pretty big difference in the bass, which I have to suspect may be due to the way the earpads seal on the face of the ear/cheek simulator (which has to be turned 180 degrees when doing left-ear measurements), but the bass response you see here was very consistent as I moved the headphones around on the simulator, and I usually get a better match than this. Caveats aside, this is an unusual measurement in that the peak in the 3kHz region (which is generally considered to make headphones sound more like speakers in a room) is very mild, only about 4dB above the response at 500Hz; often, the peak is more like 12dB above the 500Hz response. 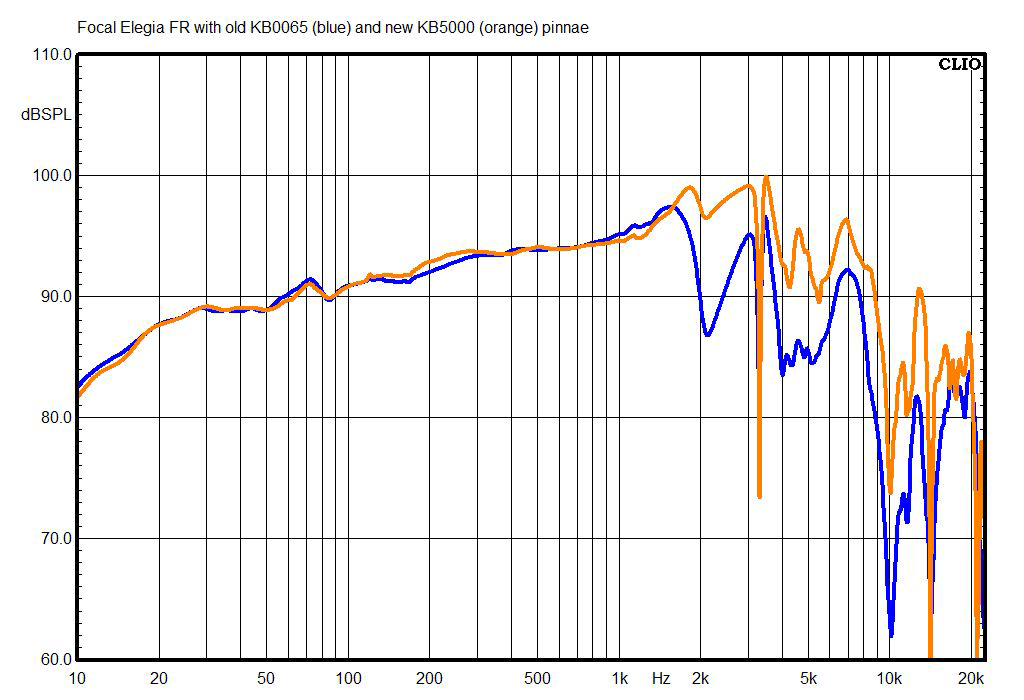 This chart shows the Elegias’ right-channel frequency response measured with the old KB0065 pinna (which I’ve used for years) and G.R.A.S.’s new KB5000 pinna, which I recently switched to because it more accurately reflects the structure and pliability of the human ear. This is just for sake of comparison with older measurements of mine. 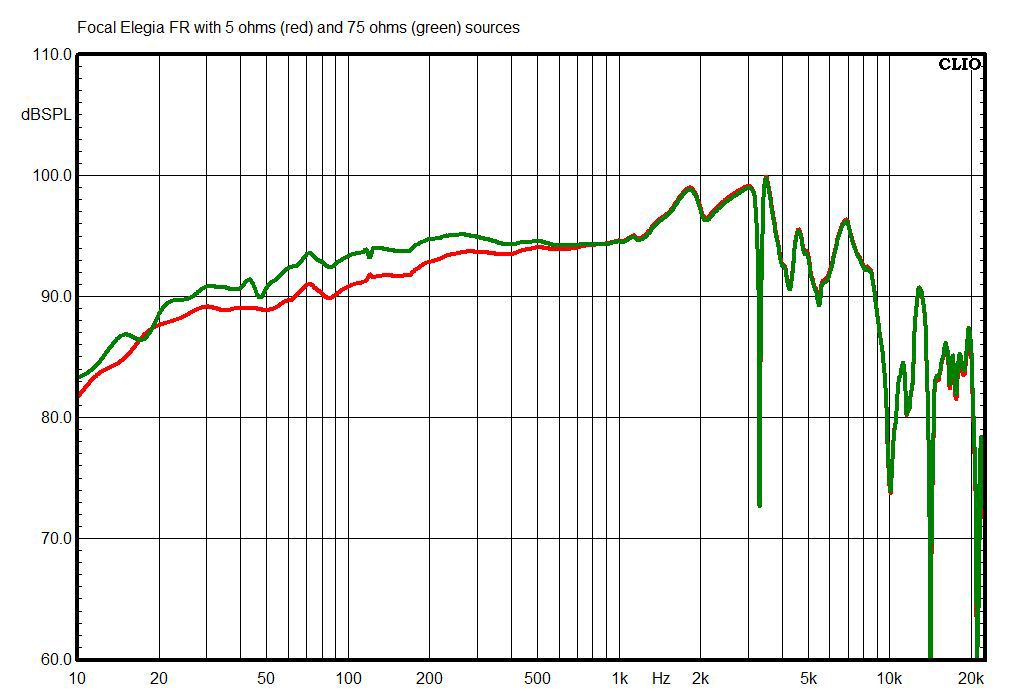 Here you can see how the Elegias’ tonal balance changes when they’re used with a high-impedance source, such as a cheap laptop or some cheap professional headphone amps. It’s a significant effect; the higher-impedance source produces a broad boost that maxes out at 2.6dB at 90Hz, enough to audibly tilt the tonal balance (and in a way I think would likely be to most people’s taste). 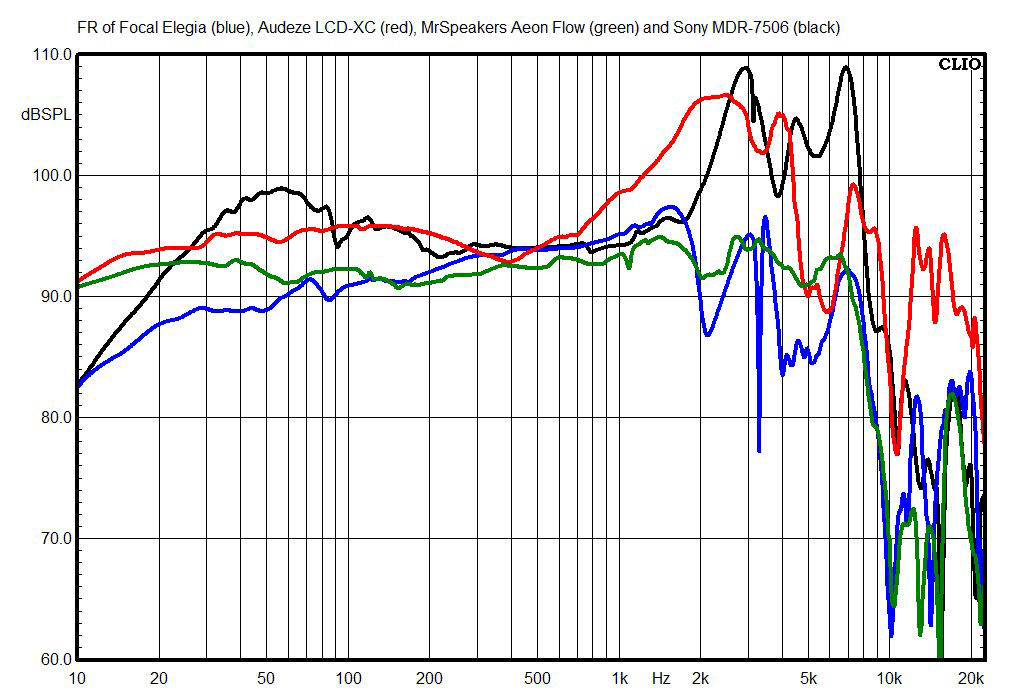 This chart shows the Elegias’ right-channel response compared with two other high-end closed-back headphones (the Audeze LCD-XCs and the MrSpeakers Æon Flows with their two-hole white filter installed), as well as the Sony MDR-7506es, a standard fixture in audio production work that generally conform to the “Harman curve,” shown in research by Harman International to be the preferred over-ear headphone response for most listeners. These measurements use the older KB0065 pinna, because that’s the only measurement I have for the LCD-XCs. You can see how unusually flat the Elegias’ response is here. 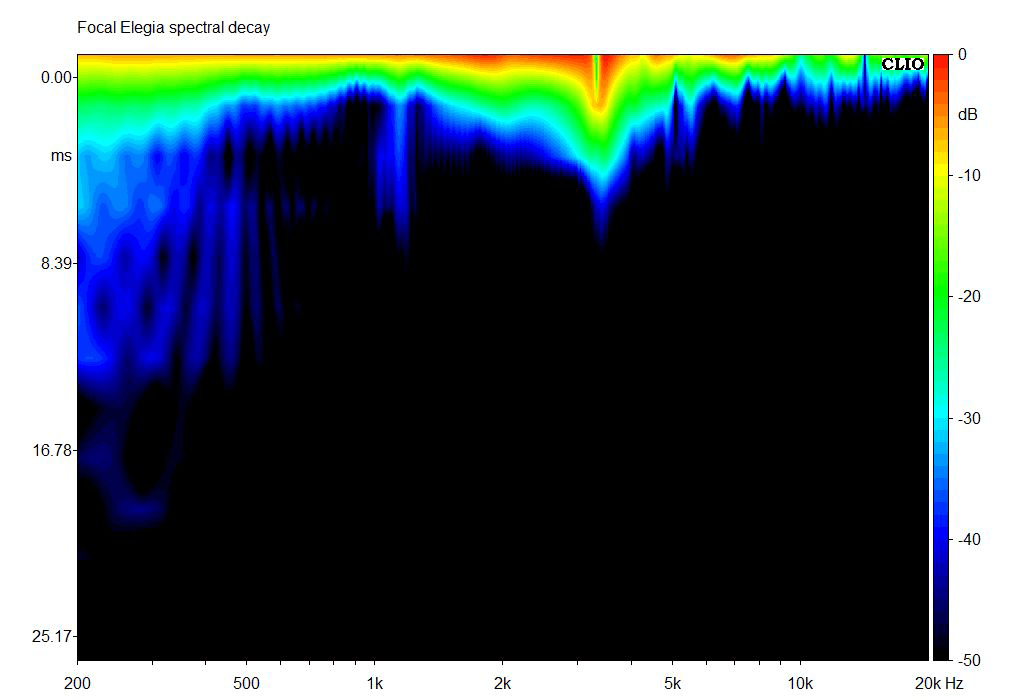 The Elegias’ spectral decay (waterfall) chart shows a fairly strong resonance at 3.2kHz, which doesn’t seem to correspond to any particular feature of the frequency response. It’s well-damped, though, and nearly gone after about 5ms. 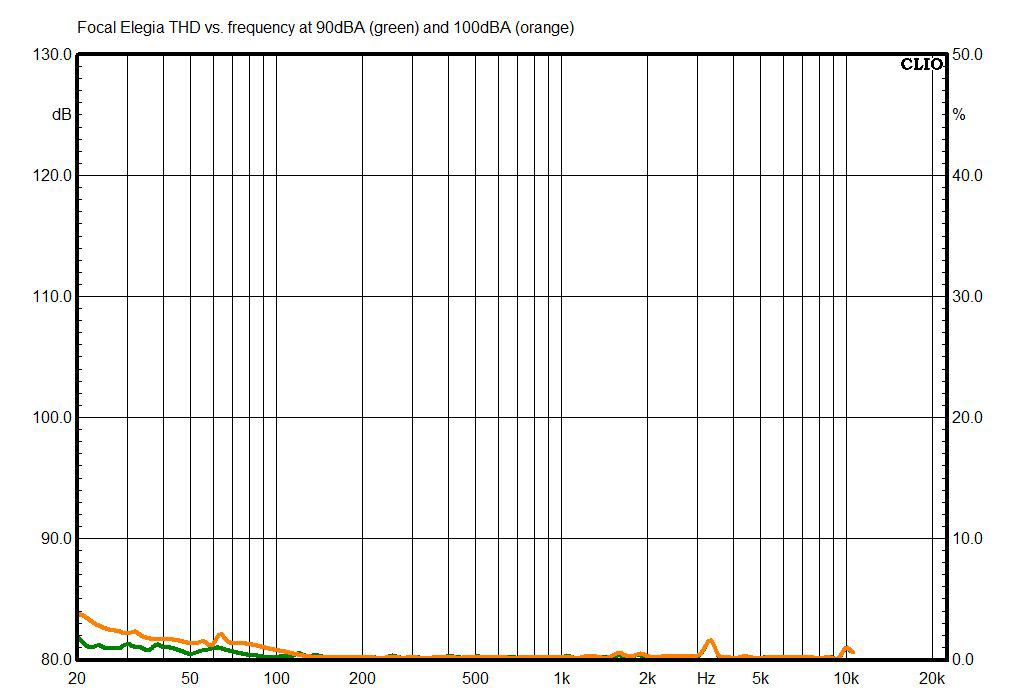 Measured total harmonic distortion (THD) of the Elegias is almost non-existent above 150Hz, and barely breaches 2% in the bass even at the extremely loud level of 100dBA. 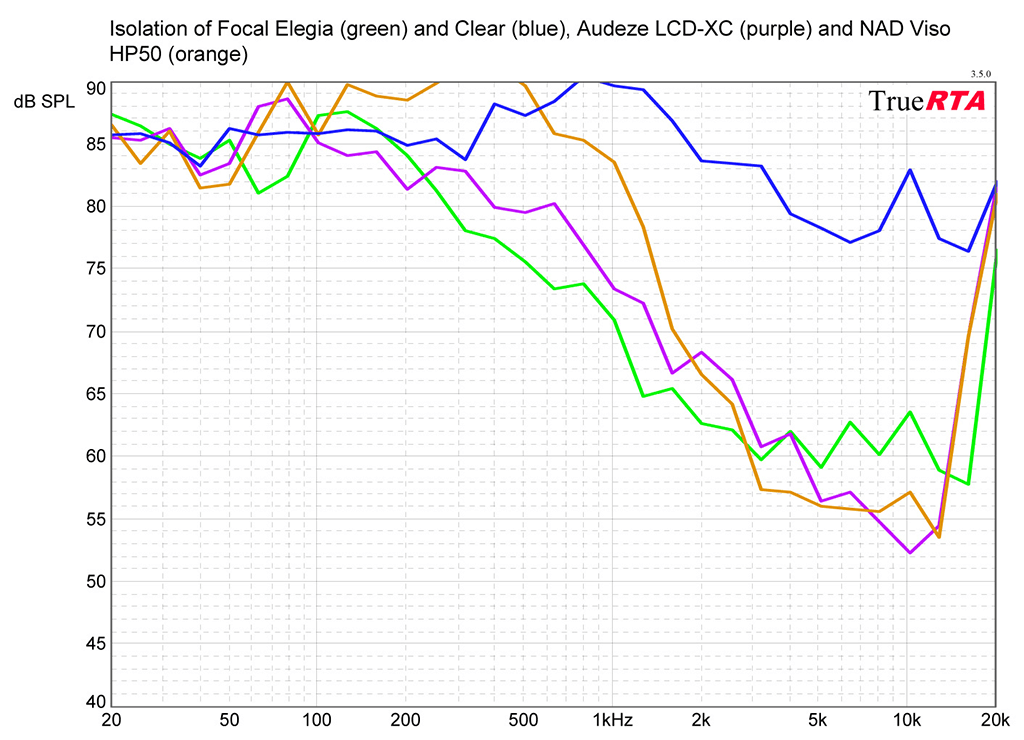 In this chart, the external noise level is 85dB SPL, and numbers below that indicate the degree of attenuation of outside sounds. The Elegias’ isolation is very good for a passive closed-back model, generally beating the MrSpeakers Æon Flows and easily beating the smaller NAD Viso HP50s. I threw in the Focal Clear isolation measurement to show the advantage in isolation gained by the closed-back design of the Elegias. 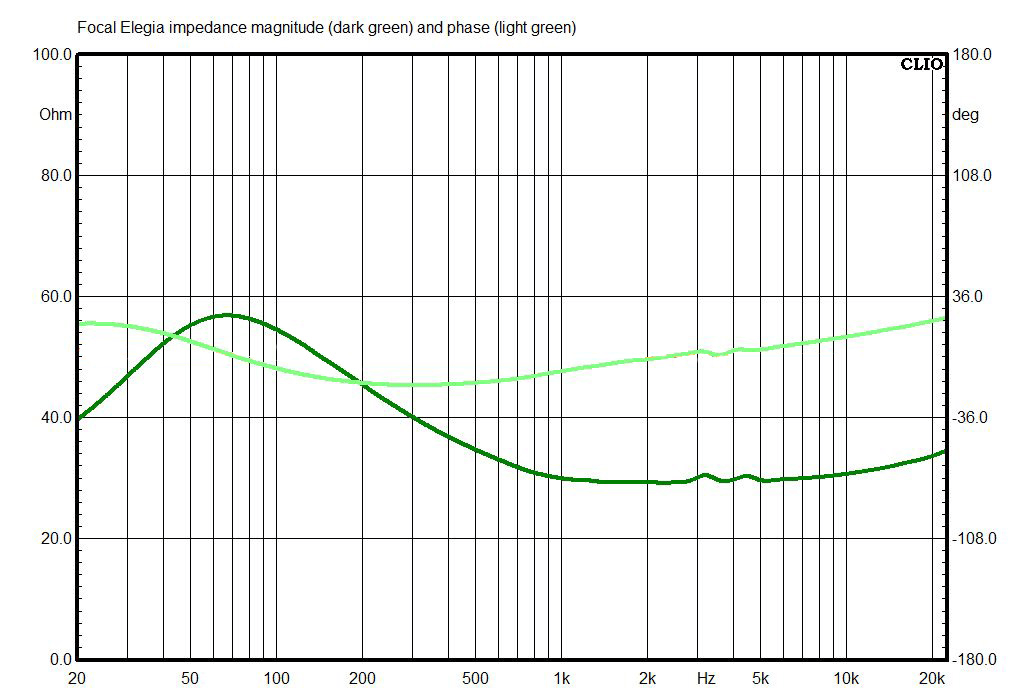 The sensitivity of the Elegias, measured between 300Hz and 3kHz with the leatherette pads using a 1mW signal calculated for 35 ohms impedance, is 102.9dB. That’s quite high for audiophile-oriented headphones, and it should be enough to get loud volumes from almost any source device.