I measured the Viso HP70s using a G.R.A.S. Model 43AG ear/cheek simulator/RA0402 ear simulator, a Clio 10 FW audio analyzer, a laptop computer running TrueRTA software with an M-Audio MobilePre USB audio interface, and a Musical Fidelity V-CAN headphone amp. On the Model 43AG, I used the original G.R.A.S. KB0065 simulated pinna for most measurements as well as the new KB5000 pinna for certain measurements, as noted. For tests in Bluetooth mode, I used a Sony HWS-BTA2W Bluetooth transmitter to send signals from the Clio 10 FW to the headphones. These are “flat” measurements; no diffuse-field or free-field compensation curve was employed. 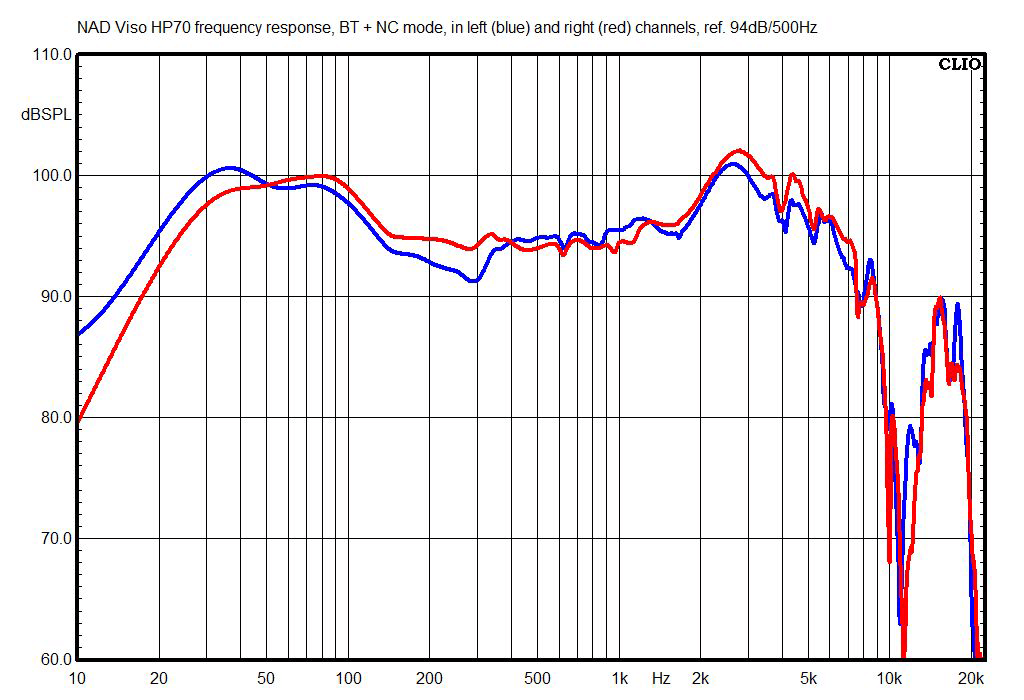 The HP70s’ frequency response, shown here with noise canceling (NC) on in Bluetooth mode, looks mostly conventional. The squarish bump in the bass response below 150Hz corresponds pretty closely to the recommended bass response of the so-called “Harman curve,” which research shows is what most listeners prefer in headphones. The peak centered at 2.8kHz is standard for headphones because it makes them sound more like speakers in a room, though in this case it’s a little on the low side relative to the bass bump. Many headphones have a dip at about 5kHz, and another smaller peak centered somewhere around 8kHz, but the HP70s show a smoother, more gradual rolloff above the 2.8kHz lower-treble peak. This suggests that these headphones may sound a little on the mellow side. 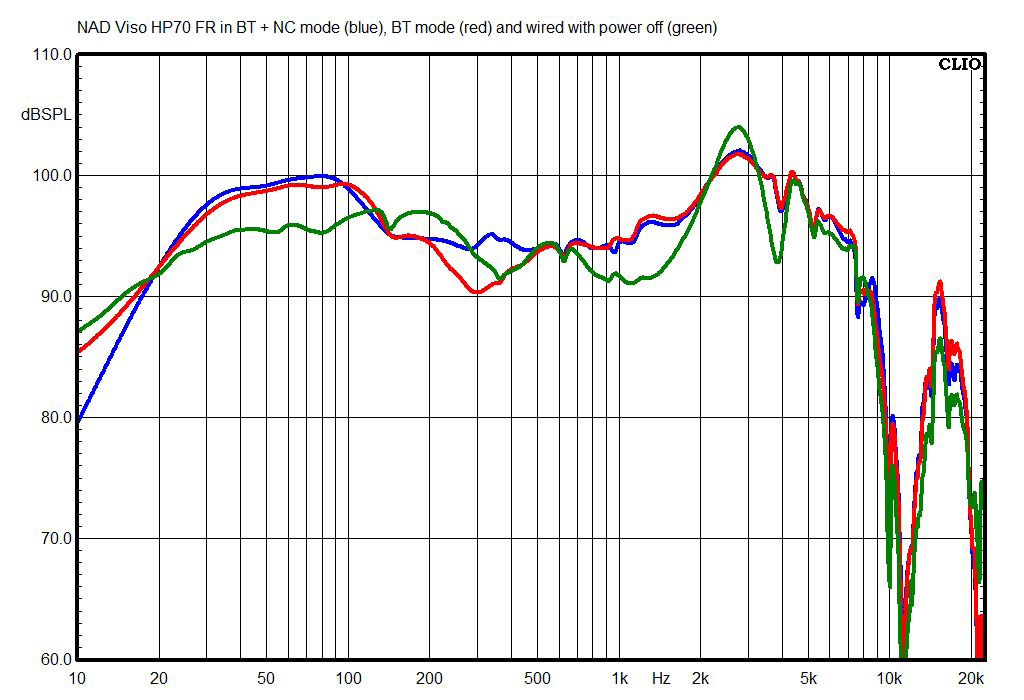 This chart shows how the HP70s’ frequency response differs when in Bluetooth with NC on and off, and in wired mode with power off. The NC has very little effect on frequency response, which is an excellent and, sadly, rare result. Wired mode does change the sound, but it actually pushes the response closer to what I see in average headphones -- while it will sound different from the Bluetooth and/or NC modes, it probably won’t sound jarringly different. 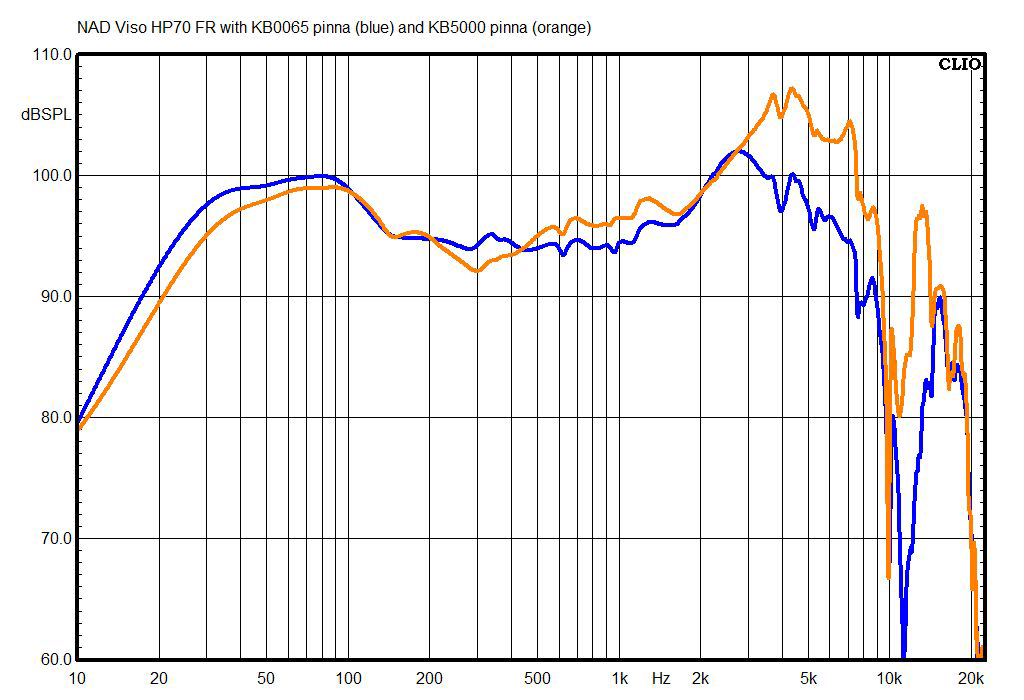 This chart shows the HP70s’ measured right-channel frequency response with BT and NC on, measured with the old KB0065 pinna (which I’ve used for years) and G.R.A.S.’s new KB5000 pinna, which I’ll eventually be switching to because it more accurately reflects the structure and pliability of the human ear. (I include this mostly for future reference rather than as something you should draw conclusions from; I intend to show both measurements in every review until I begin using only the new pinna.) 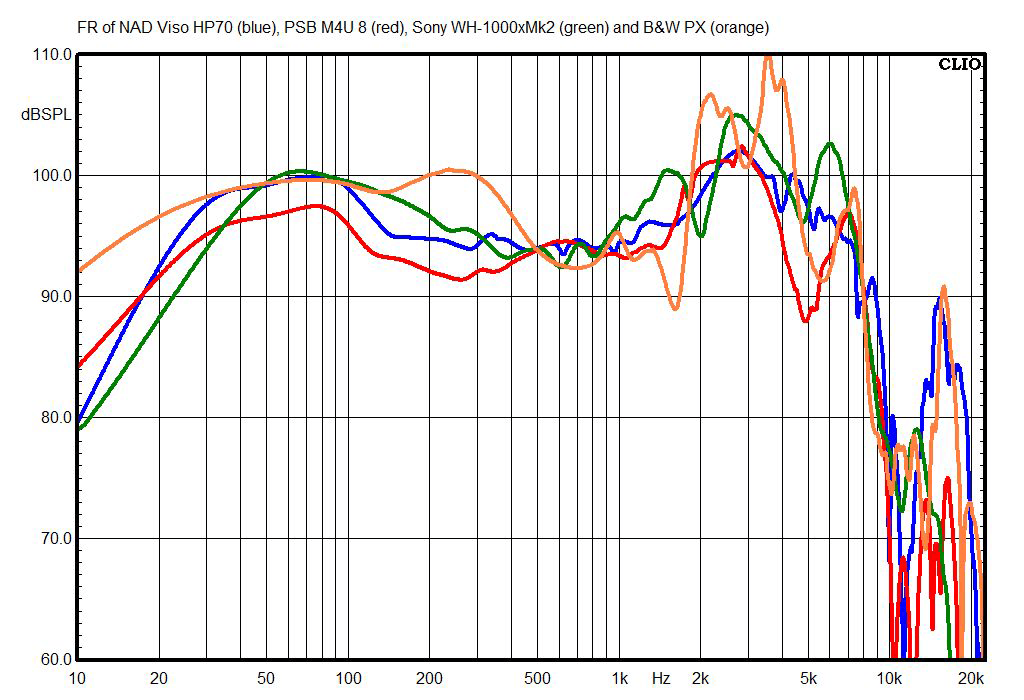 This chart shows that the HP70s are more or less in the same ballpark as their sister model, PSB’s M4U 8 (also designed by Paul Barton), and Sony’s WH-1000XMK2; here, the clear outliers are Bowers & Wilkins’s PXes. Note, though, that the HP70 is the only model shown that doesn’t have a dip in the 5-6kHz range. 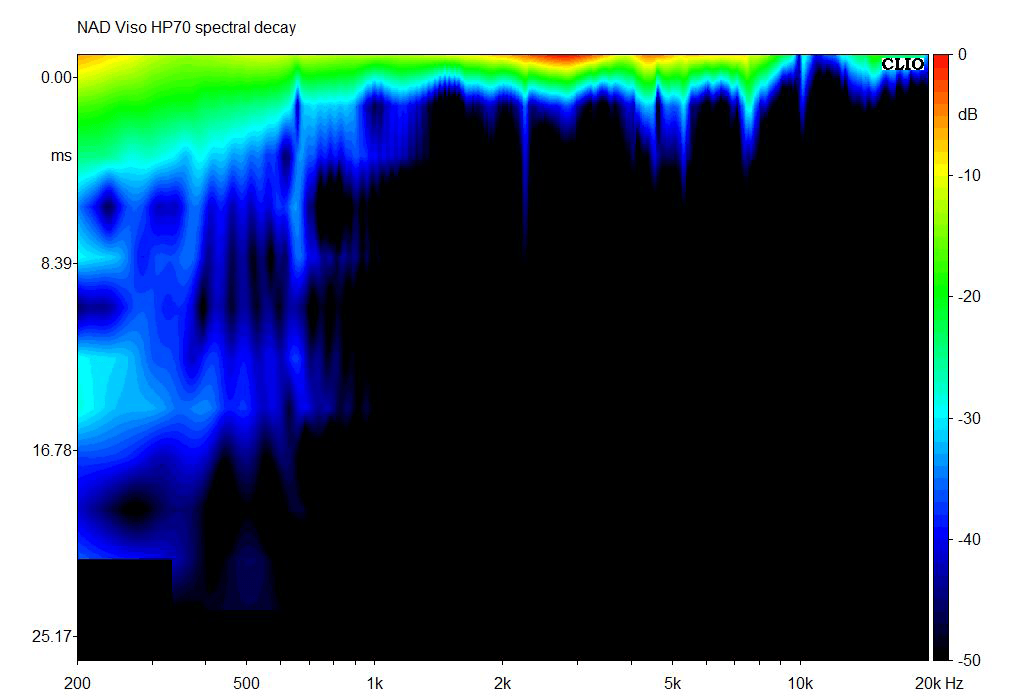 This spectral-decay (waterfall) chart shows the results in wired mode; the latency introduced by Bluetooth prevented me from getting a reliable measurement in that mode. You can see some minor resonances at about 2, 4, 5, and 7kHz, but they’re well damped and shouldn’t be very audible, if at all. The little bit of resonance creeping in down around 200Hz may correspond with the bass bump below 150Hz. 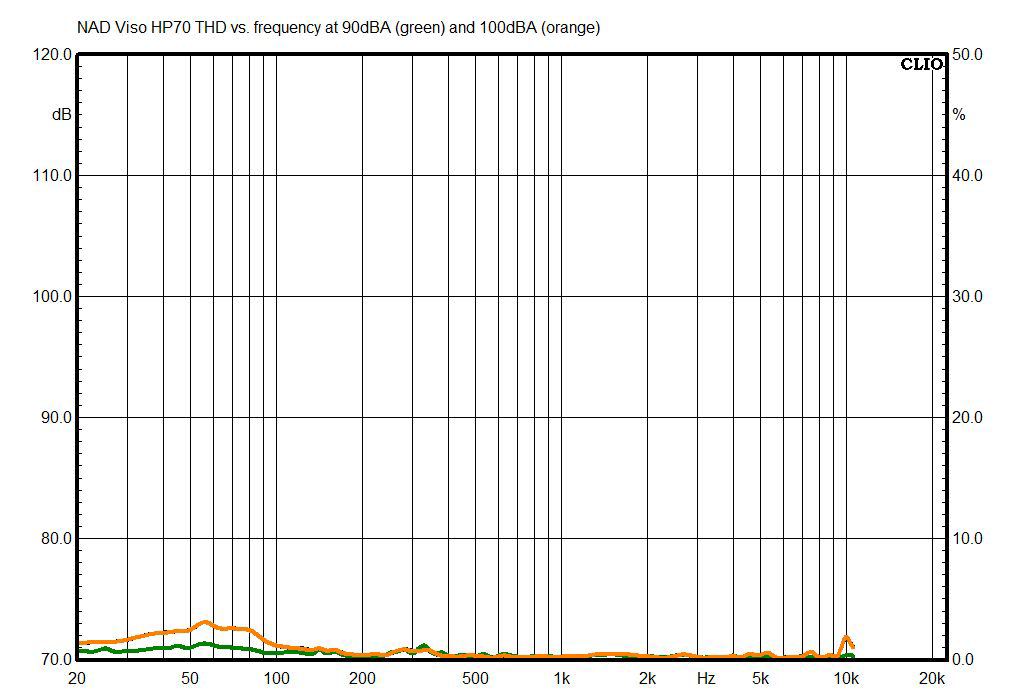 Because of latency problems with Bluetooth, I had to measure the total harmonic distortion (THD) of the HP70s in wired mode. Distortion is negligible; even at the very loud level of 100dBA, there’s only about 3% distortion in the bass -- that might seem as if it would be audible, but the generally accepted threshold for the audibility of harmonic distortion in bass frequencies is 10%. 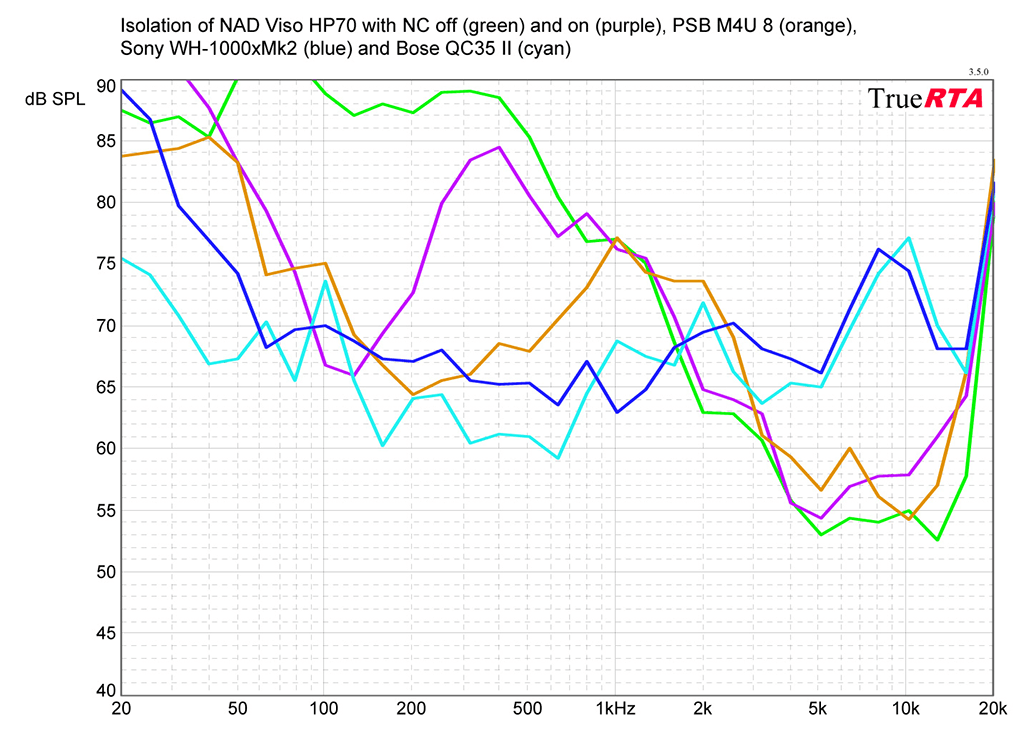 In this chart, the external noise level is 85dB SPL; the numbers below that indicate the degree of attenuation of outside sounds. Paul Barton told me that, compared with the M4U 8s’ NC chip, the HP70s’ NC chip is better at some frequencies and worse at others. This chart bears out that claim: the HP70s look better from about 90 to 150Hz, but the M4U 8s clearly outperform the HP70s from 150 to 1000Hz -- and approach the high standards set by the Sony and Bose models also shown here. 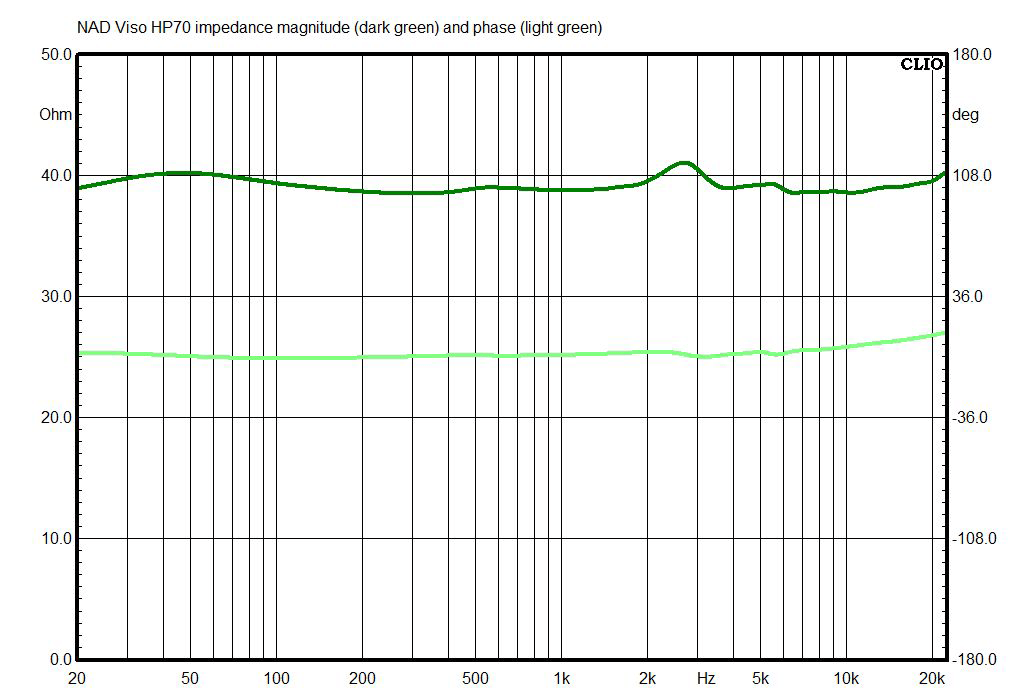 The HP70s’ impedance magnitude in wired mode is nearly flat in magnitude and phase, averaging about 38 ohms with negligible phase shift.

The sensitivity of the HP70s, measured from 300Hz to 3kHz with a 1mW signal calculated for 32 ohms impedance, is 110.3dB in wired mode with power off. They’re sure to deliver all the volume you could want if you’re watching a movie on an airplane and the battery runs down.