I measured the ATH-ANC700BTs using a G.R.A.S. Model 43AG ear/cheek simulator/RA0402 ear simulator, a Clio 10 FW audio analyzer, a laptop computer running TrueRTA software with an M-Audio MobilePre USB audio interface, and a Musical Fidelity V-CAN headphone amp. On the Model 43AG, I used the original G.R.A.S. KB0065 simulated pinna for most measurements as well as the new KB5000 pinna for certain measurements, as noted. For tests in Bluetooth mode, I used a Sony HWS-BTA2W Bluetooth transmitter to send signals from the Clio 10 FW to the headphones. These are “flat” measurements; no diffuse-field or free-field compensation curve was employed. 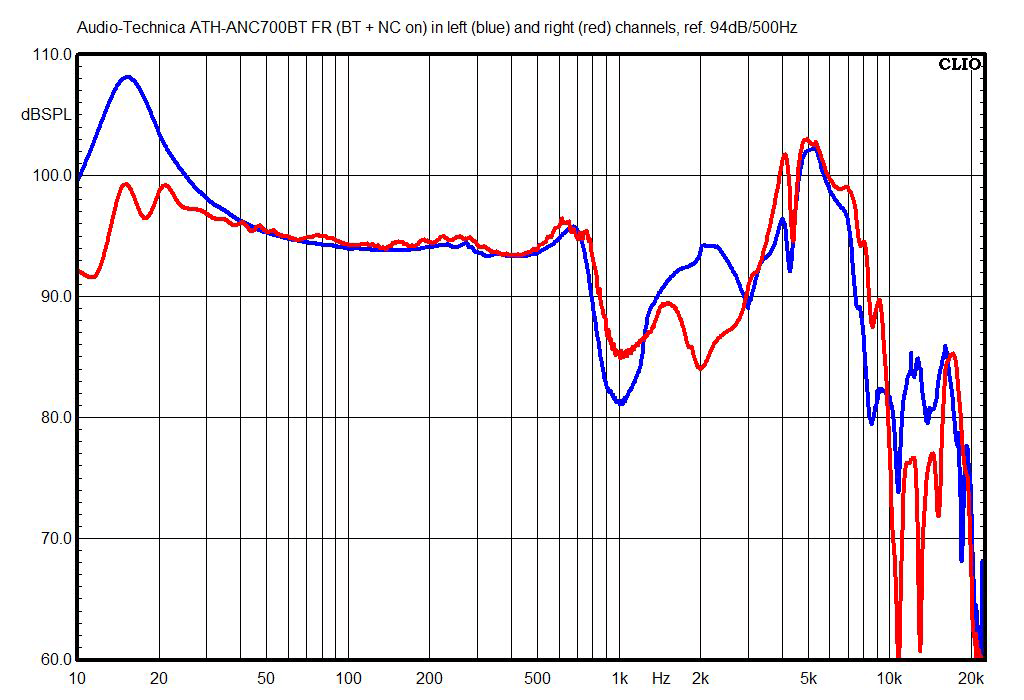 The ATH-ANC700BTs’ frequency response, shown here with noise canceling (NC) on in Bluetooth mode, looks strange for a couple of reasons: the abrupt dip in the midrange and lower treble between 800Hz and 3.5kHz, and a lower/mid-treble response peak centered at 5kHz instead of the more usual 3kHz. It seems unlikely that this tuning would result in a natural, uncolored sound. 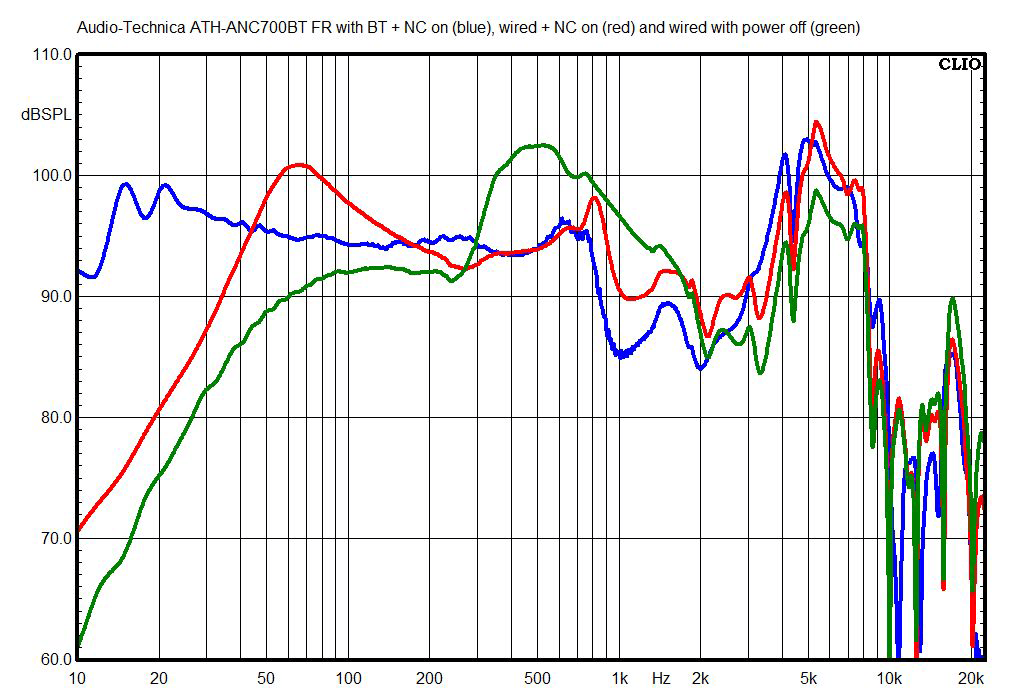 This chart shows how the response of the ATH-ANC700BTs differs when in Bluetooth with NC on, and in wired mode with NC on and power off. The responses with NC on don’t differ dramatically from Bluetooth to wired mode except in the bass, where there’s a peak at 65Hz. The wired mode with power off looks even stranger, with a huge peak centered at 500Hz -- something I’ve never seen before. Incidentally, measuring the wired connection with 70 ohms impedance added to the V-CAN’s 5-ohm output impedance produced a mild tilt in tonal balance, boosting bass and cutting treble by 1dB each. 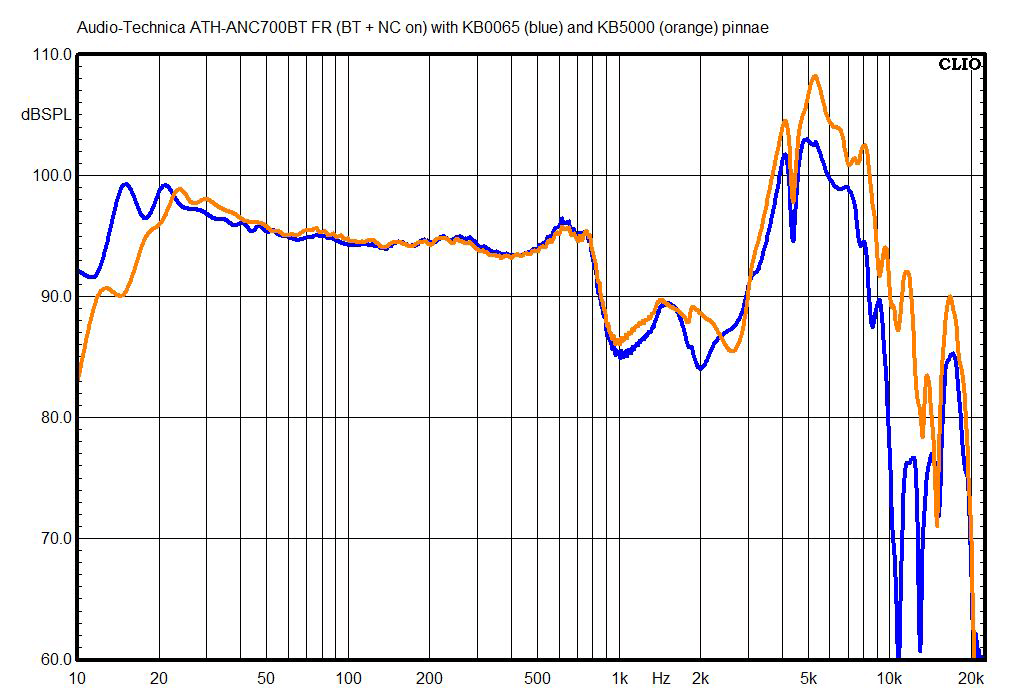 This chart shows the ATH-ANC700BTs’ measured right-channel frequency response with BT and NC on, measured with the old KB0065 pinna (which I’ve used for years) and G.R.A.S.’s new KB5000 pinna, which I’ll eventually be switching to because it more accurately reflects the structure and pliability of the human ear. I’m including this mostly for future reference rather than as something you should draw conclusions from; I intend to show both measurements in every review until I completely switch to the new pinna. 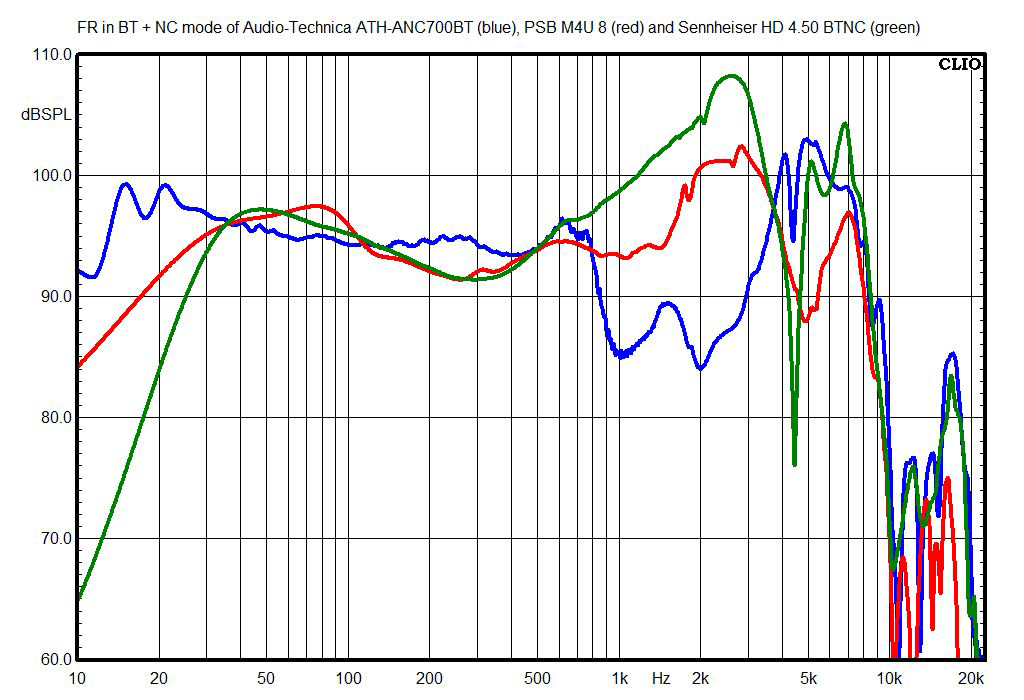 The ATH-ANC700BTs’ big midrange/lower-treble dip is put in perspective by this chart, which compares them with two other BT/NC models, the PSB M4U 8s and Sennheiser HD 4.50 BTNCs. 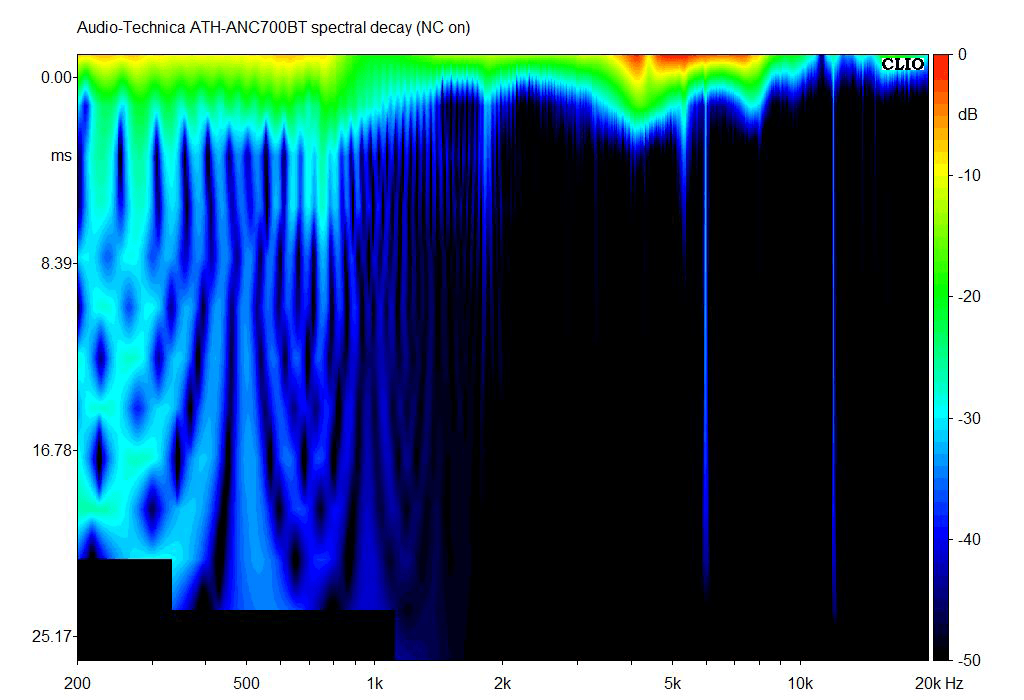 This spectral-decay (waterfall) chart shows the results in wired mode with NC on; the latency introduced by Bluetooth prevented me from getting a reliable measurement in that mode. There’s a lot of resonance below 1kHz, which corresponds with the shelf in the frequency response below 800Hz. There are also some unusual, extremely narrow (high-Q) resonances in the treble, but they’re so narrow, and so low in amplitude (-40dB), that I can’t imagine they’d be audible. (The black boxes in the lower left corner of the graph are there because the gating on this measurement reduces resolution at low frequencies.) 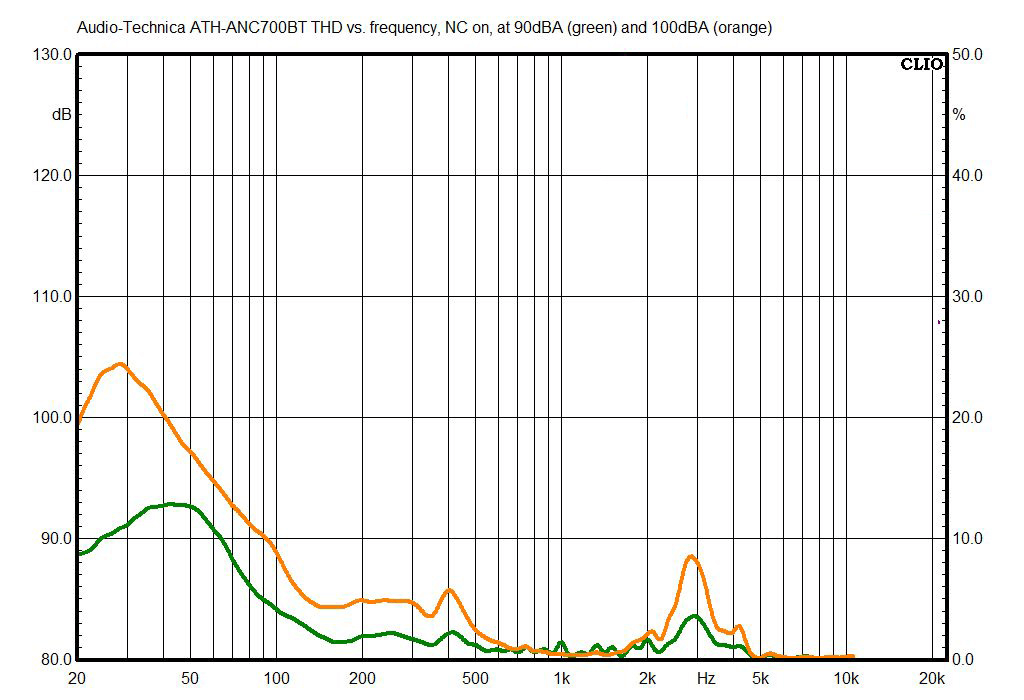 Because of latency issues with Bluetooth, I had to measure the total harmonic distortion (THD) of the ATH-ANC700BTs in wired mode; this measurement was taken with NC on. Distortion below about 150Hz is much higher than I’m used to seeing, even at 90dBA. I normally caution that, because my measurements are taken at loud levels, most of the distortion you see in the measurements probably isn’t audible at normal listening volume -- but I suspect that the bass distortion visible here might be audible. I measured a couple of other headphones at the same time and got normal measurements on this test. I also confirmed this result by shutting down and restarting the Clio analyzer, recalibrating the levels, and repeating the measurements, but the result was essentially the same. 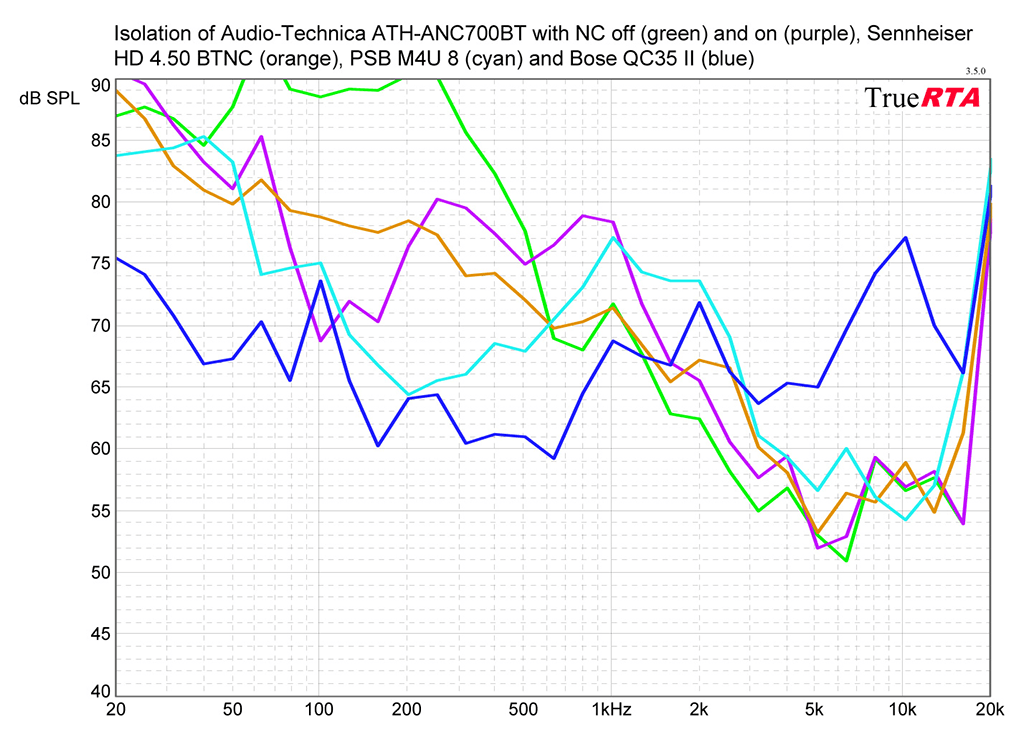 In this chart, the external noise level is 85dB SPL; the numbers below that indicate the degree of attenuation of outside sounds. To interpret this, keep in mind that jet-airliner cabin noise tends to be loudest between 80 and 1000Hz, and the loudest part of that band is the low-frequency hum between 80 and 200Hz. The ATH-ANC700BT reduces noise pretty well, by about -15dB, between 80 and 200Hz, but doesn’t do much from 200 to 1000Hz -- which corresponds with Rad’s comment about the NC seeming to shift the noise up into the midrange. 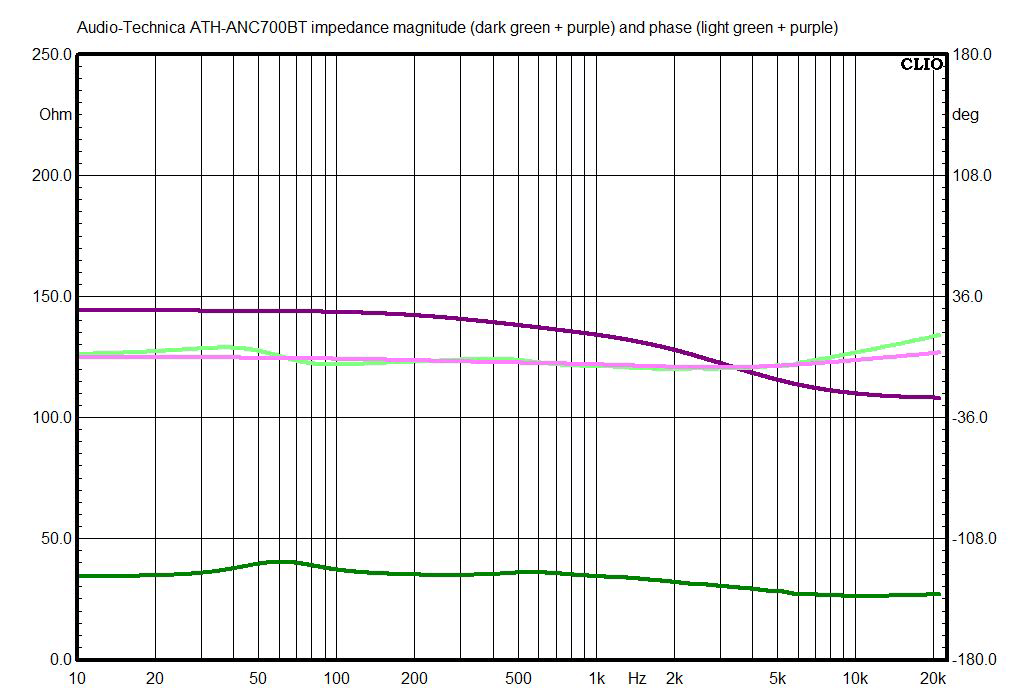 The ATH-ANC700BTs’ impedance magnitude in wired mode averages 32 ohms with power off (full passive mode) and about 130 ohms with NC on. Phase is mostly flat in both modes.

The sensitivity of the ATH-ANC700BTs with a wired connection and NC off (full passive mode), measured between 300Hz and 3kHz with a 1mW signal calculated for the rated 35 ohms impedance, is 106.1dB. That should be plenty enough volume if you’re watching a movie on an airplane and the battery runs down.