I measured the PSB M4U TW1s using a G.R.A.S. Model 43AG ear/cheek simulator plus RA0402 ear simulator/coupler and KB5000 simulated pinna, a Clio 10 FW audio analyzer, and a laptop computer running TrueRTA software with an M-Audio MobilePre USB audio interface. I used a Sony HWS-BTA2W Bluetooth transmitter to send signals from the Clio 10 FW to the earphones. These are “flat” measurements; no diffuse-field or free-field compensation curve was employed. Note that some of the measurements I usually perform are not included here; because the M4U TW1s have only Bluetooth input, my analyzer was unable to measure spectral decay; and, of course, impedance and sensitivity measurements are irrelevant for wireless-only earphones. 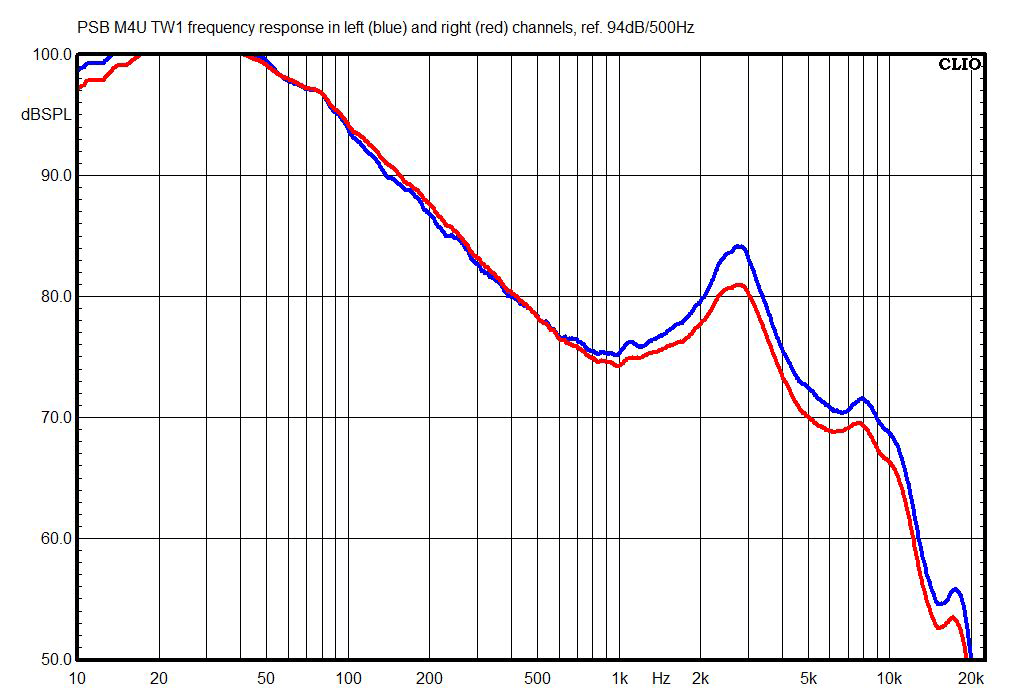 I was unable to get my Clio 10 FW analyzer to compensate for the M4U TW1s’ Bluetooth-induced latency, and so was unable to run the usual frequency-response sweeps. Instead, I fed the earphones pink noise and used the Clio’s FFT analyzer function to measure the frequency response. This changes the look of the curve quite a bit, giving the earphones the appearance of boosted bass. But if you were to turn the curve slightly counterclockwise, you’d see that the M4U TW1s have a very conventional frequency response for earphones, with a large, broad bass bump followed by a strong peak at 2.8kHz and a softer peak centered at about 7.8kHz. Incidentally, the reference level for this measurement was 94dB with a 500Hz sine tone, but this does not translate to 94dB with pink noise. 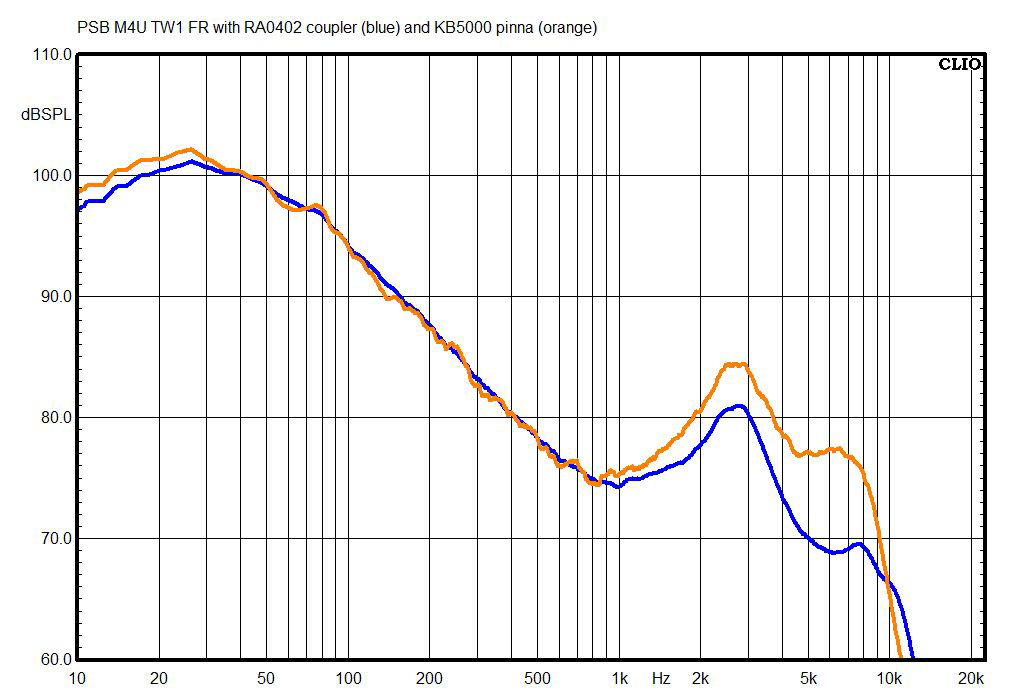 This chart shows the M4U TW1s’ right-channel frequency response measured with the stainless-steel coupler included with the RA0402 ear simulator, and with the addition of G.R.A.S.’s new KB5000 pinna, which I’ll eventually switch to because it more accurately reflects the structure and pliability of the human ear. (I include this mostly for future reference rather than as something you should draw conclusions from; I intend to show both measurements in every review until I begin using only the new pinna.) 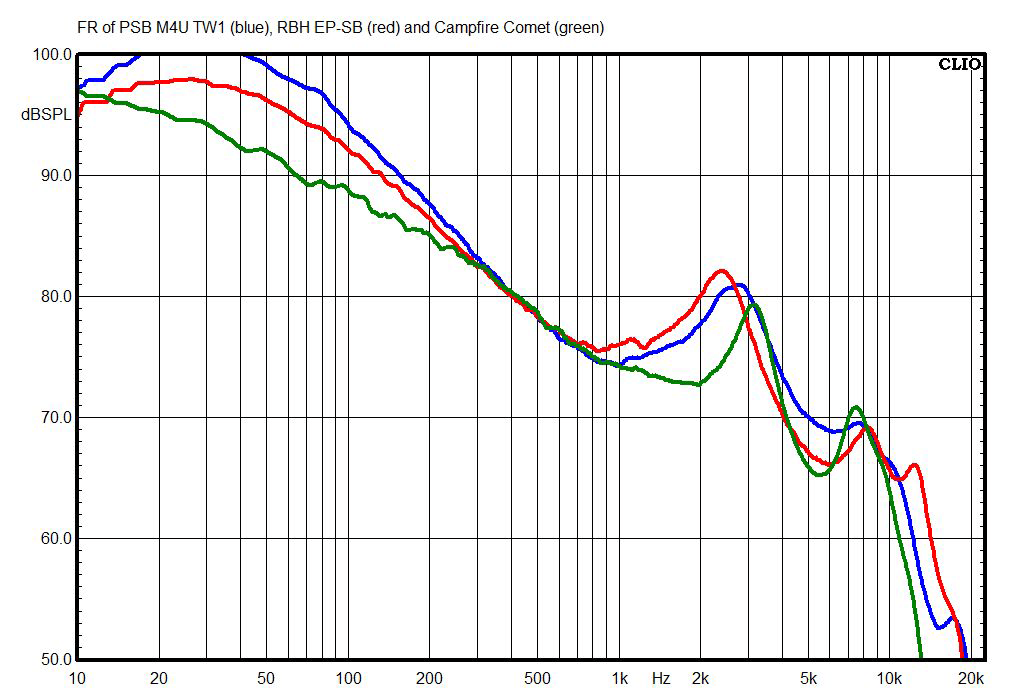 This chart shows the M4U TW1s measured against the RBH EP-SB Bluetooth earphones and the Campfire Audio Comet passive earphones powered by a Musical Fidelity V-CAN amplifier, using the same pink-noise-plus-FFT-technique described above. You can see that all the curves are quite similar, with mild differences in tonal balance. 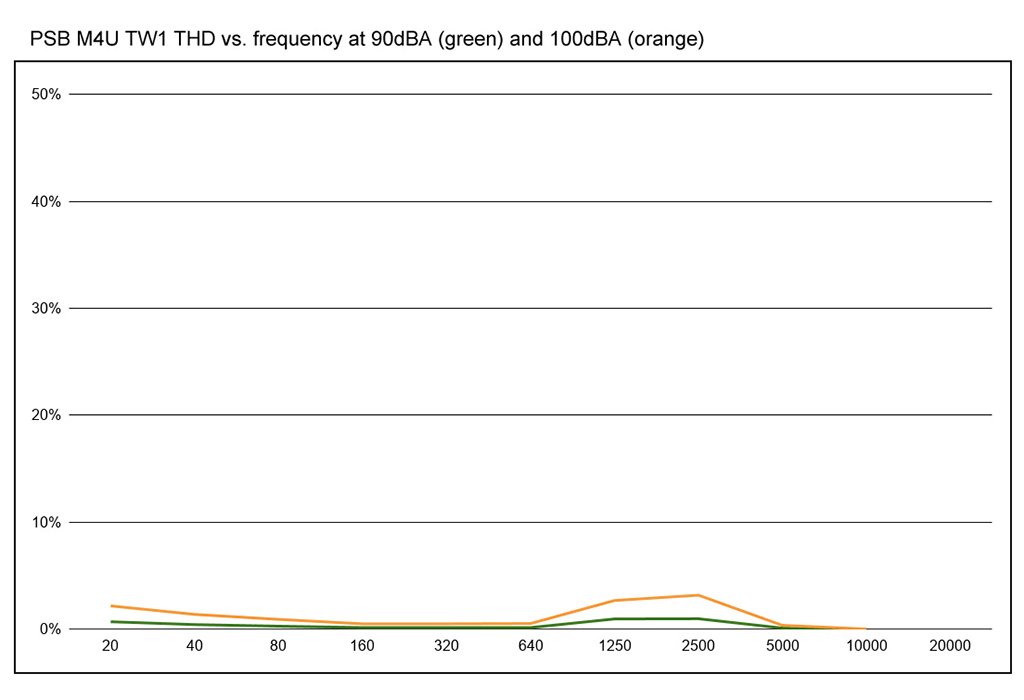 Because of latency issues with Bluetooth I had to measure the total harmonic distortion (THD) of the M4U TW1s using discrete tones in one-octave steps rather than swept tones, but the results should be comparable to my usual distortion measurements. The distortion is typical -- perhaps even a bit high -- for active earphones with dynamic drivers, hitting about 4% at 2500Hz at the extremely high listening level of 100dBA. I doubt this would be audible unless you really crank these up to the max, in which case the sound will likely make your ears hurt after a couple of minutes. 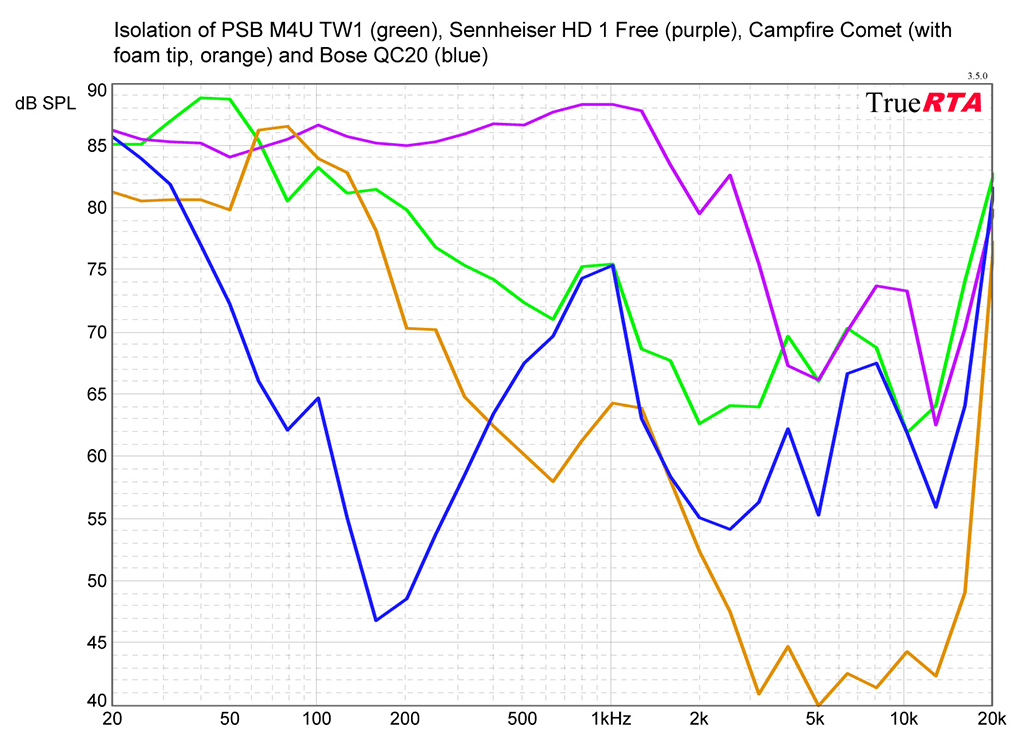 In this chart, the external noise level is 85dB SPL; the numbers below that indicate the degree of attenuation of outside sounds. The isolation of the M4U TW1s is a little better than average for a conventional, dynamic-driver design, especially from 200 to 1000Hz, though not as good as a smaller design equipped with foam eartips.

The M4U TW1s’ range of Bluetooth operation was amazing: 47’, line of sight, and that’s through a window -- my house isn’t big enough for me to measure this entirely indoors. This result -- almost four times as far as some Bluetooth headphones and earphones can manage -- held true whether I used an iPod Touch or a Samsung Galaxy S9 smartphone as my source.