The DS Audio DS 003 was conditioned for 30 minutes at 1Vrms at the output before any measurements were taken.

The DS Audio DS 003 phono preamp is designed to operate with DS Audio optical cartridges, and therefore operates differently from a conventional phono preamp designed for moving magnet (MM) or moving coil (MC) cartridges. As per DS Audio’s technical information page, these optical cartridges are an “amplitude proportional type” transducer, as opposed to a “velocity proportional type” transducer found in record-cutting heads and both MM and MC cartridges, which operate on electromagnetic induction.

In terms of measuring the DS Audio DS 003 phono preamp with the APx555 analyzer, certain issues needed to be overcome. To accomplish this, we entered into a dialog with an engineer at DS Audio to ensure that the measurements were performed correctly.

To solve the first issue, 2k ohms resistors were wired in series between the DS Audio’s RCA inputs and the APx555’s outputs, thereby limiting the current that the APx555 outputs would need to sink from the DS Audio’s DC voltage sources. The second issue was resolved by lifting the DS Audio right input ground connection (i.e., it was connected to nothing). In order to ensure that both left and right input signals to the DS Audio were referenced to ground, a connection was made between the DS Audio ground post and the APx555 left- and right-input ground posts (note: this wiring configuration is often utilized for conventional phono preamps to reduce noise). In order to ensure that the shield of the RCA cable between the APx555’s output 2 and the right input on the DS Audio were grounded on both ends, a short jumper was wired between the cable’s ground connection and the DS Audio ground post. The third issue was partially resolved at the same time as the first, as the characteristic output impedance of the optical cartridge, which operates as a current source, is 2k ohms. This left the inherent frequency response of the cartridge, and in turn, finding the correct inverted EQ curve to program into the APx555 signal generator for frequency sweeps. 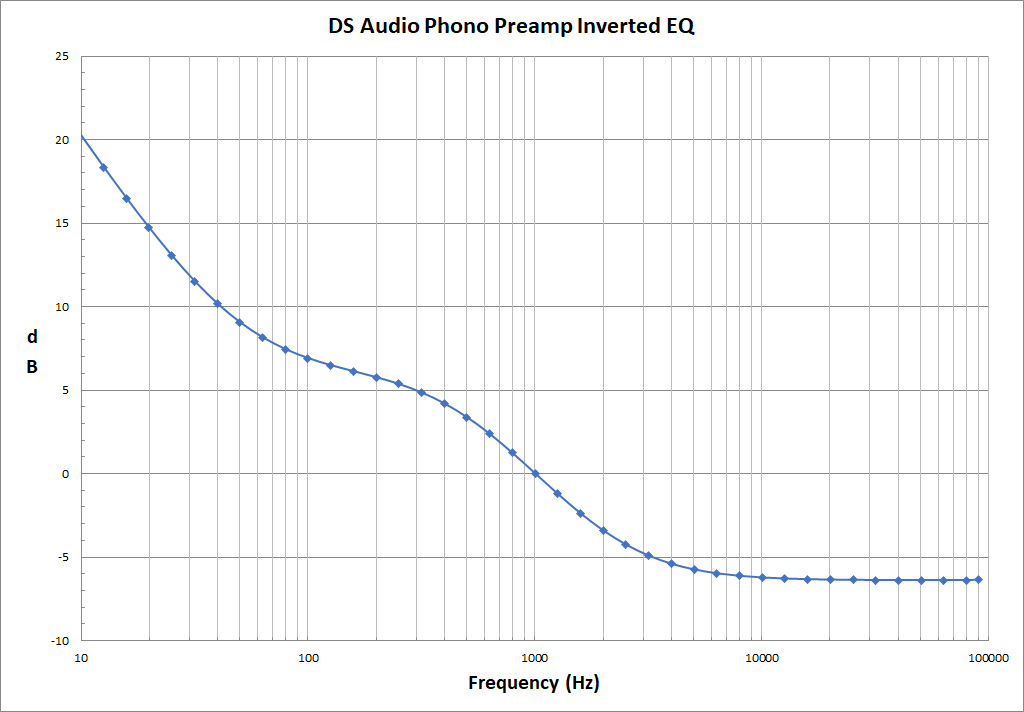 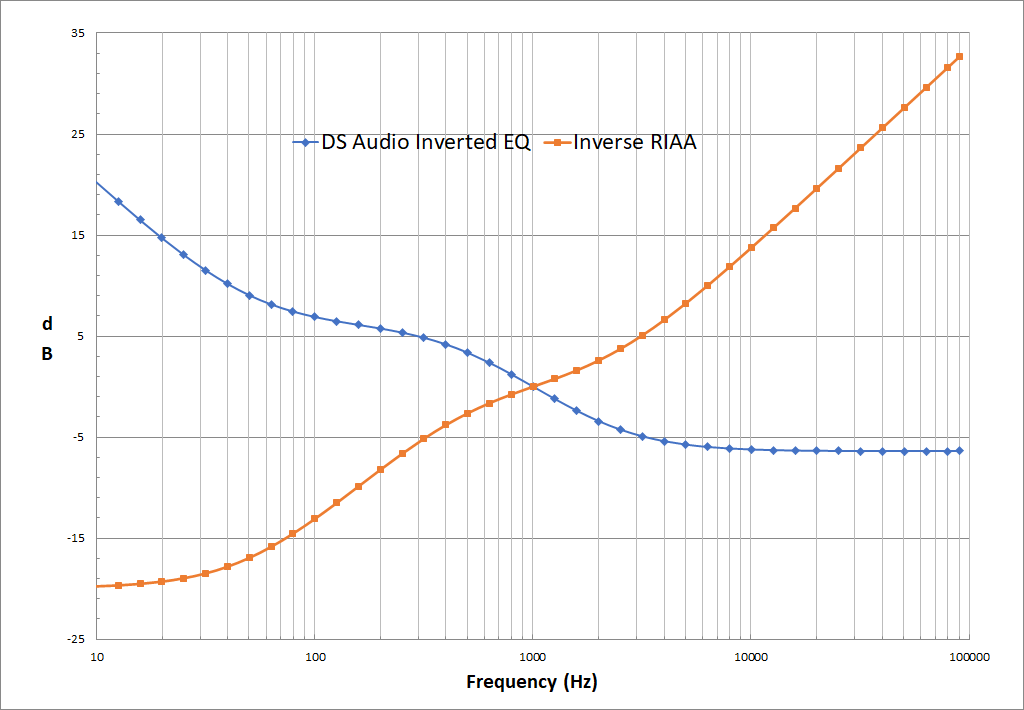 The DS Audio DS 003 offers one pair of unbalanced RCA inputs and two pairs of unbalanced (RCA) outputs, the latter labelled Output 1 and 2. Output 1 does not have a high-pass filter applied, but Output 2 does. There is also a switch labelled Cut Off for the high-pass filter that can be toggled between 30Hz and 50Hz. Unless otherwise stated, all measurements were taken using Output 1 and the Cut Off switch set to 30Hz. Using these settings, to achieve the reference output voltage of 1Vrms at 1kHz at the DS Audio DS 003 outputs, 92mVrms was required at the output of the APx555. 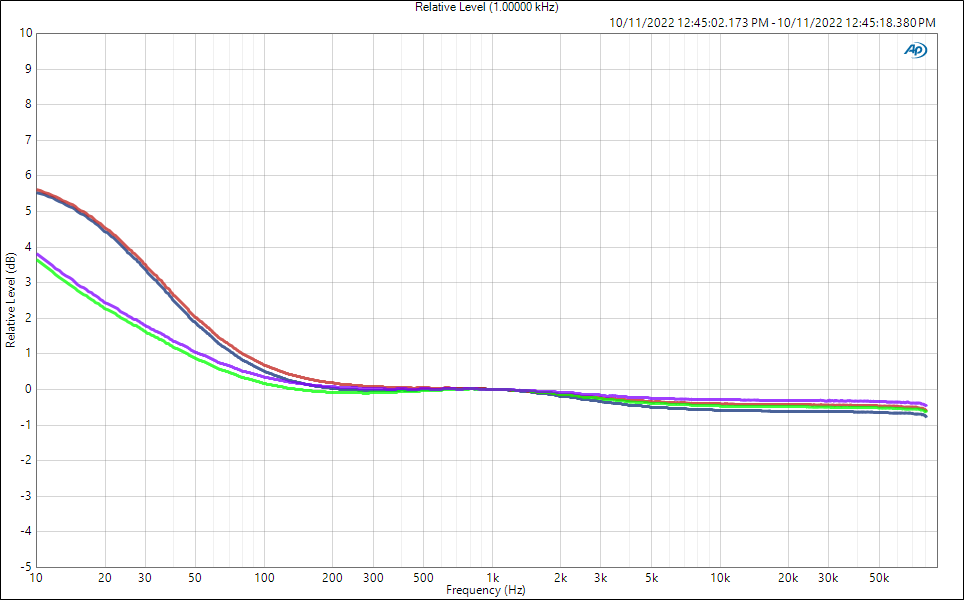 In our measured frequency-response plots above measured at Output 1, the blue/red traces are with the Cut Off switch to 30Hz, while the purple and green are with the switch set to 50Hz. The DS Audio inverted EQ curve is applied to the input sweep to emulate the output of the DS Audio optical cartridge. From 100Hz to 80kHz, we find a very flat response, with deviations in the +/- 0.5dB range. Below 100Hz, there is a distinct lift in the bass region. With the Cut Off switch at the 30Hz position, there’s 4.5dB of boost at 20Hz (relative to 1kHz), and with the Cut Off switch at the 50Hz position, just under 2.5dB of boost at 20Hz. We would normally refer to this as a deviation; however, in our discussions with DS Audio, they have said that this is intentional, with the following rationale: “as most cutter-heads, except for Neumann's SX74, have a small roll-off in low frequencies below 40Hz, DS Audio implements a small boost in this frequency range.” It is odd, however, that the Cut Off switch has any effect at all on Output 1, since Output 2 has the high-pass filter applied, but Output 1 does not. In the graph above and some of the graphs below, we see two visible traces: the left channel (blue or purple) and the right channel (red or green). On other graphs, only one trace may be visible, which is because the left and right channels are tracking extremely closely, so as not to show a difference with the chosen axis scales. 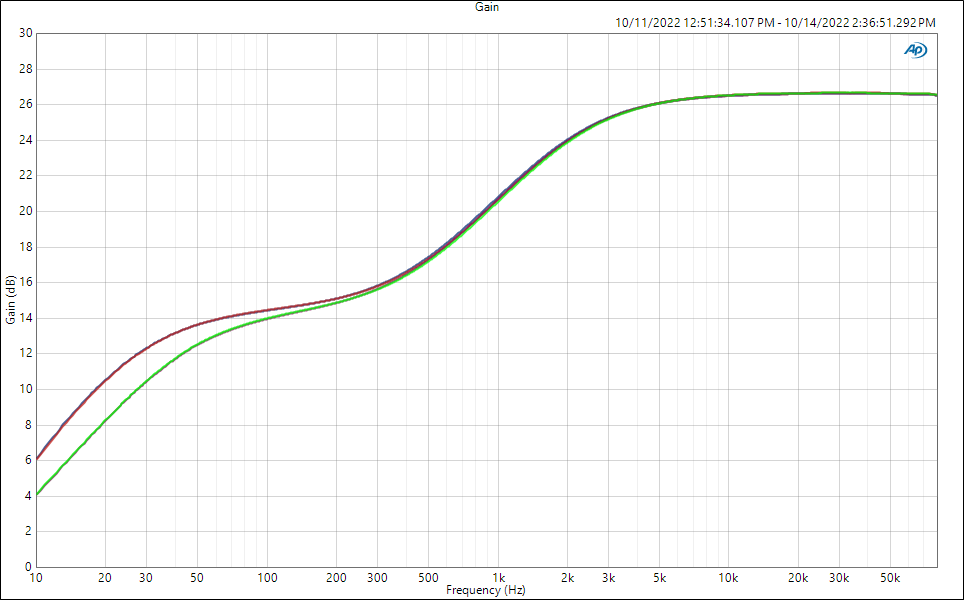 Above is the frequency response plot in terms of absolute gain with no EQ applied for Output 1. In terms of the shape of the response curve, we find, as expected, roughly the mirror image of our DS Audio inverted EQ curve. Absolute gain ranges from about 10.5dB at 20Hz, to 21dB at 1kHz, and about 26.5dB at 20kHz with the Cut Off switch at the 30Hz position. In the 50Hz position, we are at 8dB at 20Hz. 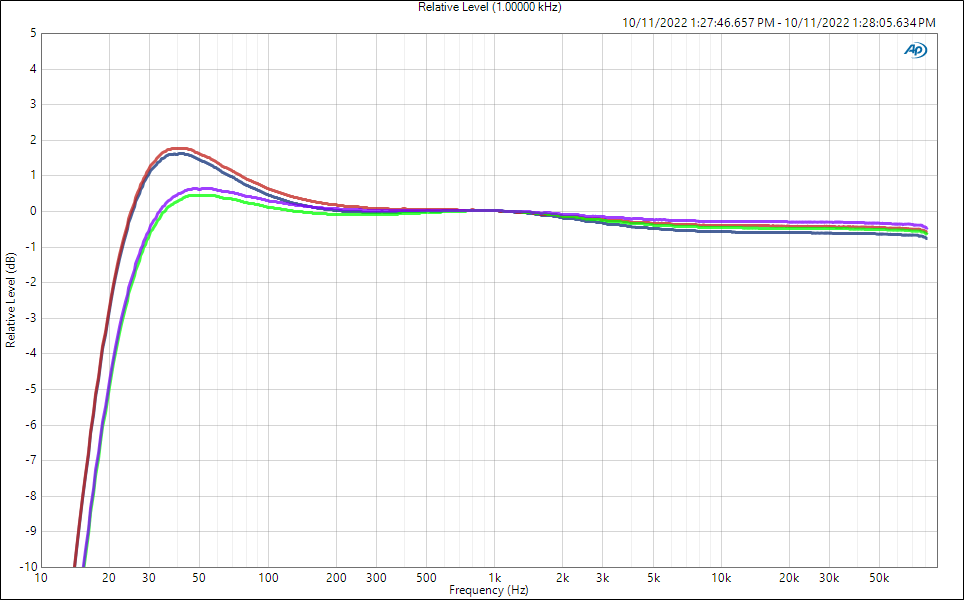 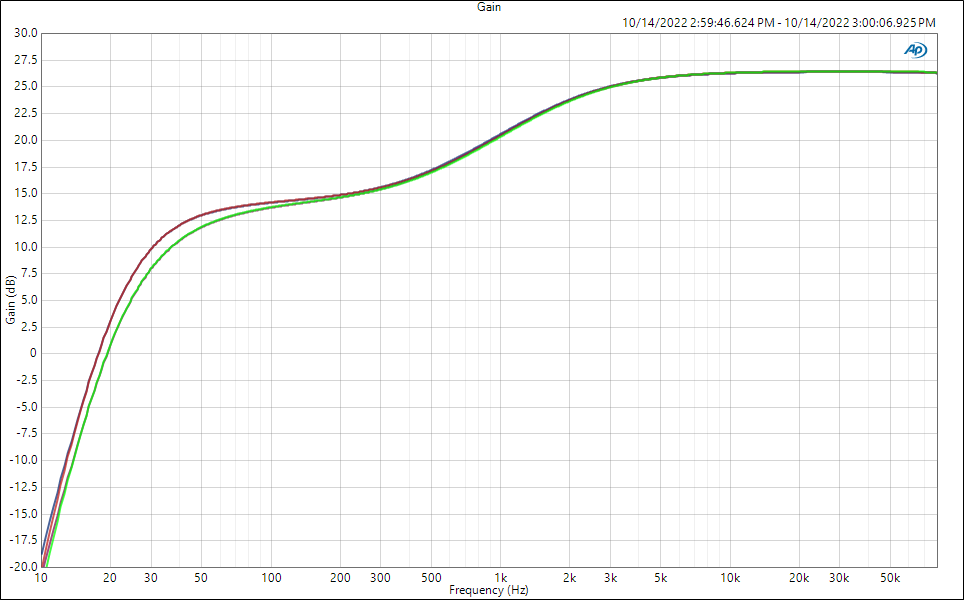 Above is the frequency response plot in terms of absolute gain with no EQ applied for Output 2. Absolute gain ranges from about 2.5dB at 20Hz, 21dB at 1kHz, and about 26.5dB at 20kHz with the Cut Off switch at the 30Hz position. In the 50Hz position, we are at 0dB at 20Hz. 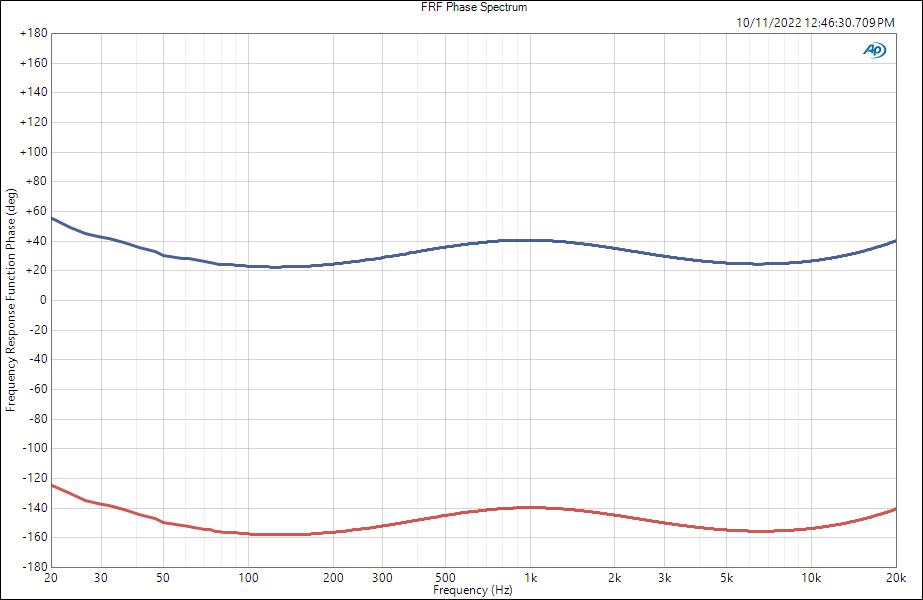 Above is the phase response of the DS 003, from 20Hz to 20kHz. The right channel has inverted polarity; however, this is intentional, to match the behavior of the optical cartridge. Since the phono preamp must implement a combination of the RIAA equalization curve and a compensation curve for the inherent behavior of the optical cartridge, phase shift at the output is inevitable. Here we find a worst case of about +60 degrees at 20Hz, dipping to +20 degrees at around 100Hz and 5kHz. 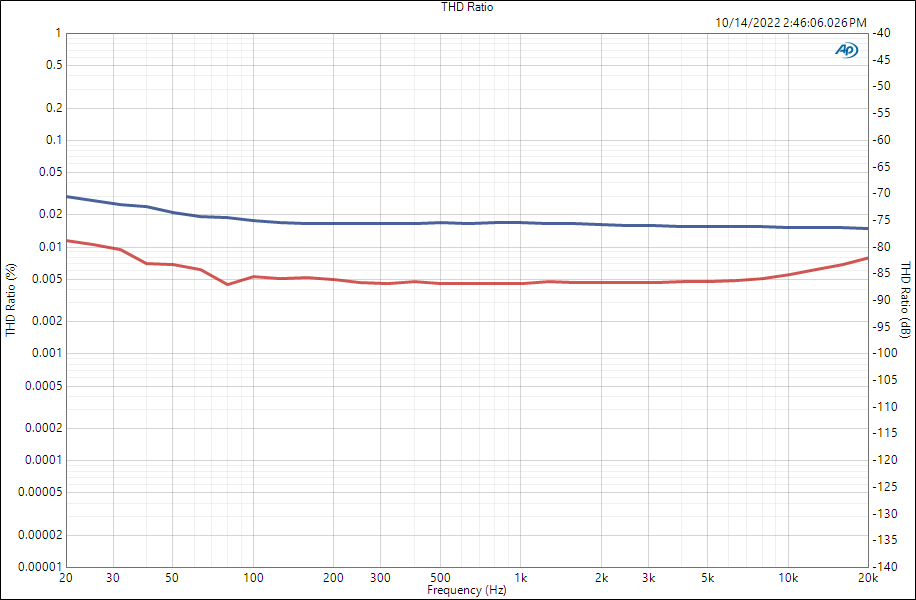 The chart above shows THD ratios as a function of frequency, where the input sweep is EQ’d with our DS Audio inverted EQ curve. The unbalanced output voltage is maintained at the refrence 1Vrms. THD values are relatively flat, with the right channel outperforming the left by almost 10dB, hovering from 0.01% at 20Hz, down to 0.005% from 100Hz to 10kHz, then up to 0.007% at 20kHz. 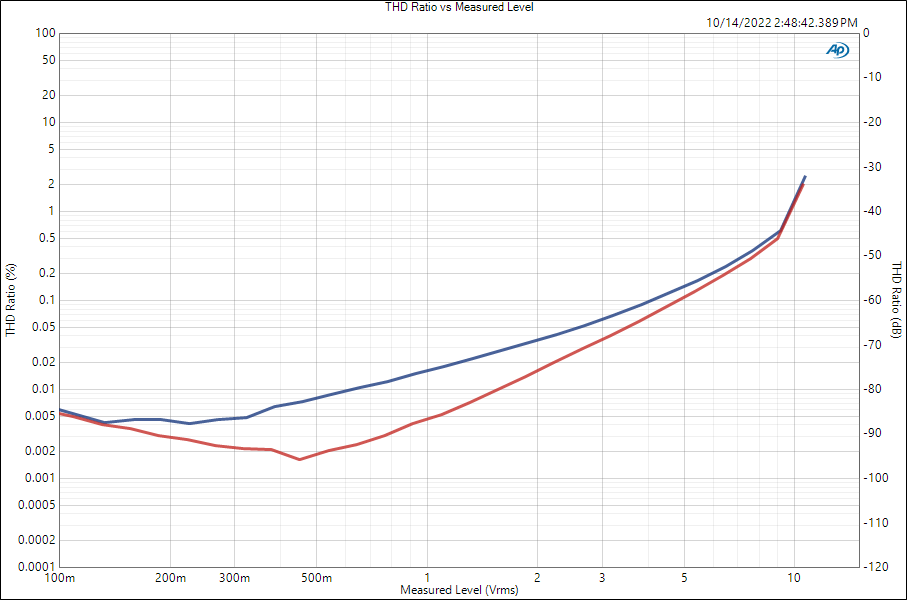 The chart above shows THD ratios as a function of Output 1 voltages at 1kHz. Between 300mVrms and about 2Vrms, the right channel outperforms the left channel, again by as much as 10dB. Right-channel THD values at 100mVrms are just under 0.005%, then dip as low as 0.002% around 0.5Vrms, then a slow rise to the 1% THD value for both inputs at 9.8Vrms. It’s important to mention that anything above 1-2Vrms is not typically required for most line-level preamps or integrated amps. 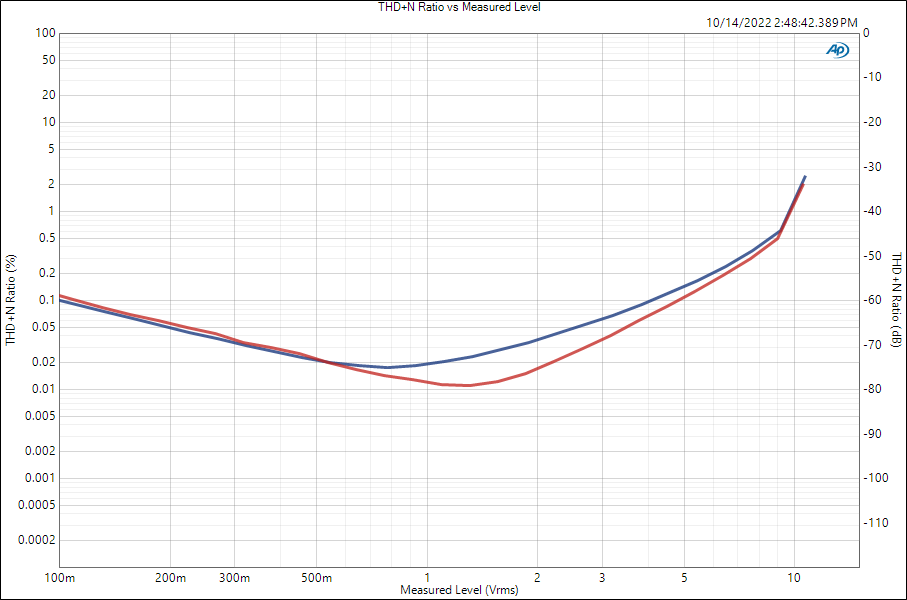 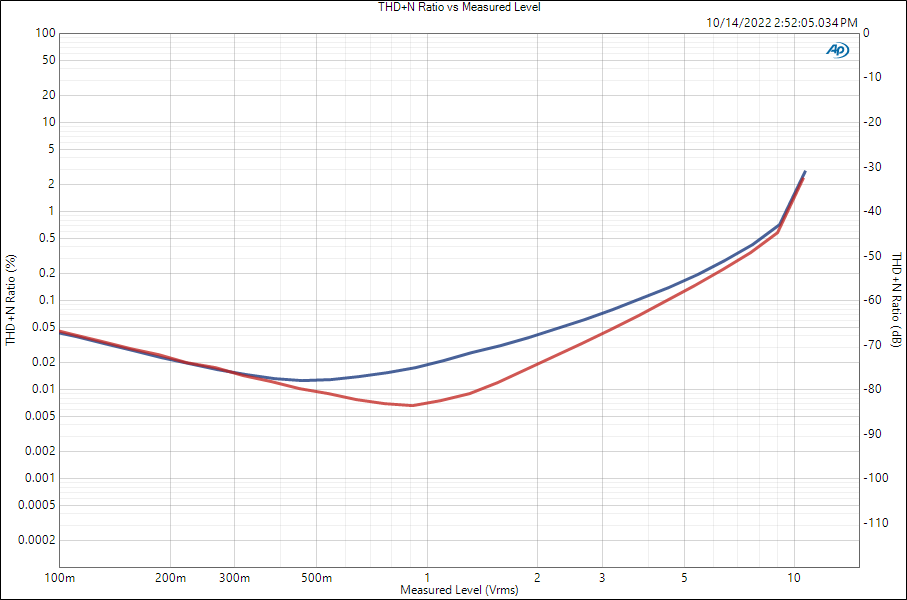 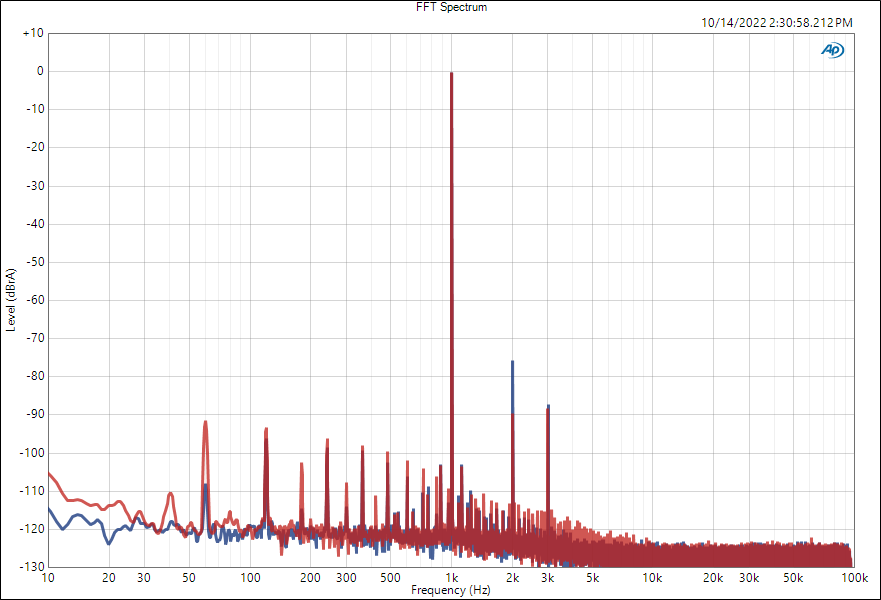 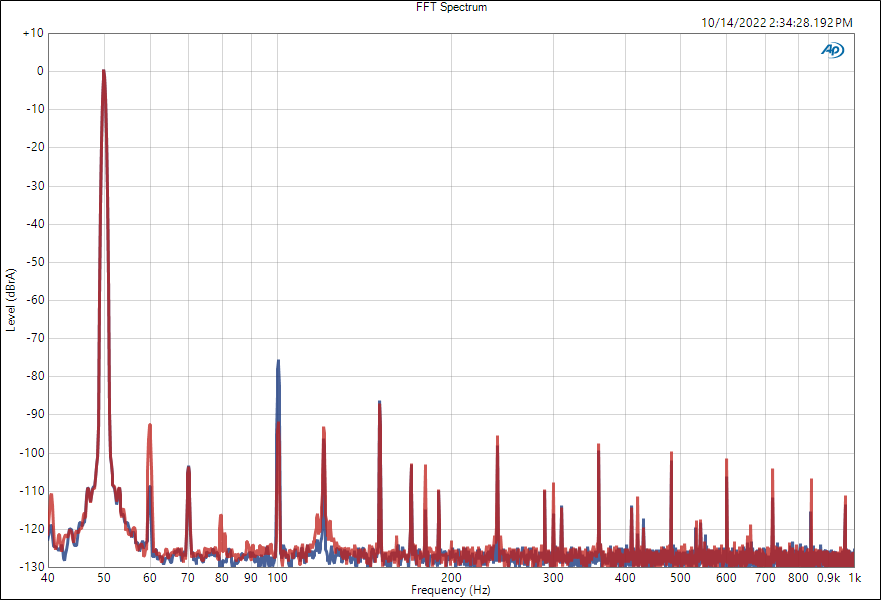 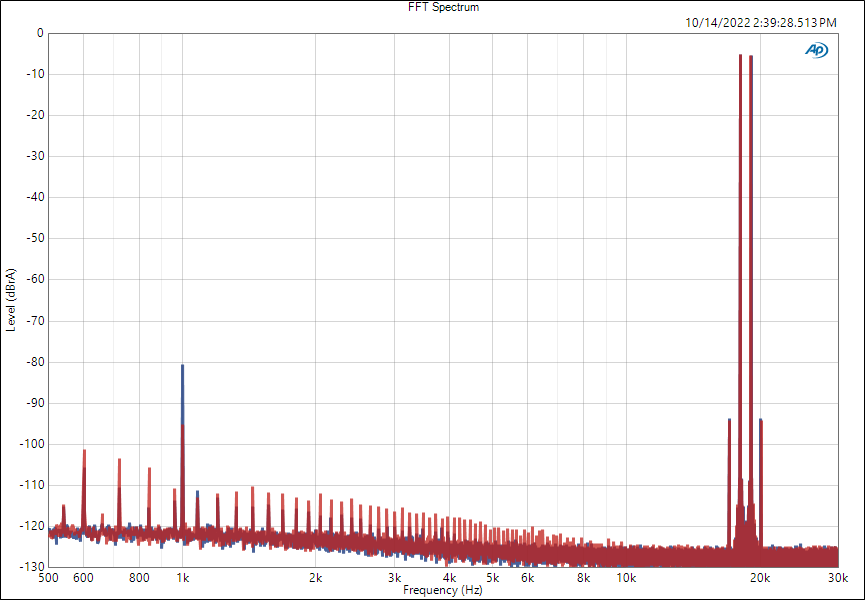