I measured the Edifier Stax Spirit S3 headphones using laboratory-grade equipment: a GRAS Model 43AG ear/cheek simulator/RA0402 ear simulator with KB5000/KB5001 simulated pinnae, and an Audiomatica Clio 12 QC audio analyzer. A MEE Audio Connect Bluetooth transmitter was used to send signals from the Clio 12 QC to the headphones. For isolation measurements, I used a laptop computer running TrueRTA software with an M-Audio MobilePre USB audio interface. These are “flat” measurements; no diffuse-field or free-field compensation curve was employed. If you’d like to learn more about what our measurements mean, click here. 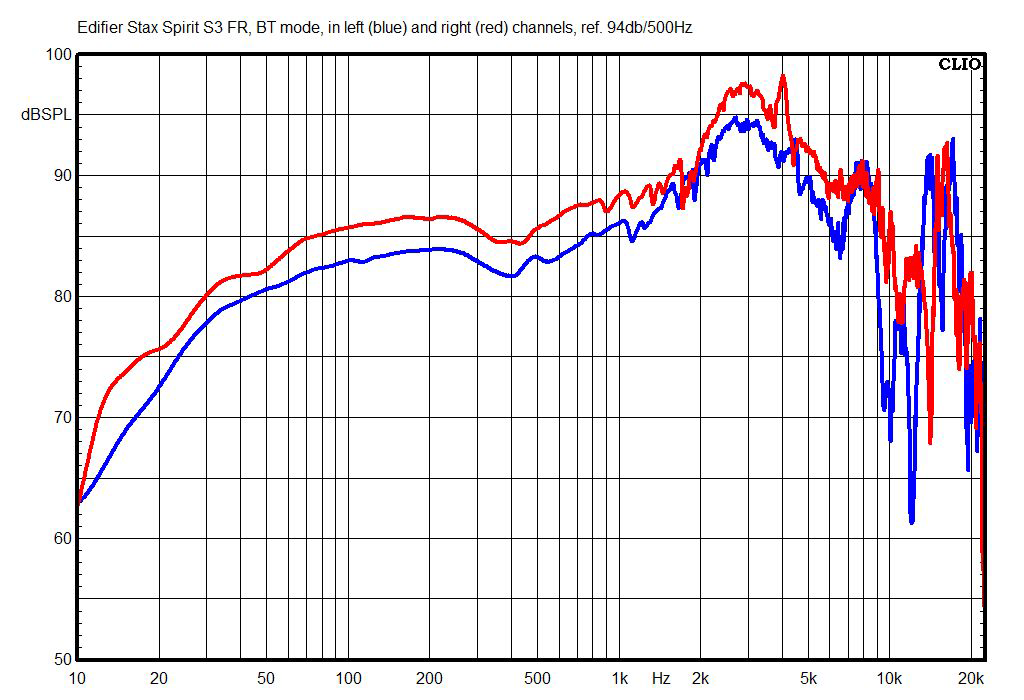 This chart shows the S3s’ frequency response with the Bluetooth connection. The bass response is not really this rolled off—that appears to be an artifact of the gating used to compensate for Bluetooth’s latency. The interesting thing here is that the response looks somewhat like what I usually measure from planar-magnetic headphones, with mostly flat bass and a large peak centered at 3kHz, so that’s good. However, nothing I tried could fix that volume mismatch between the left and right channels; if it’s an issue with the headphones, my guess is that this could be due to somewhat mismatched drivers. 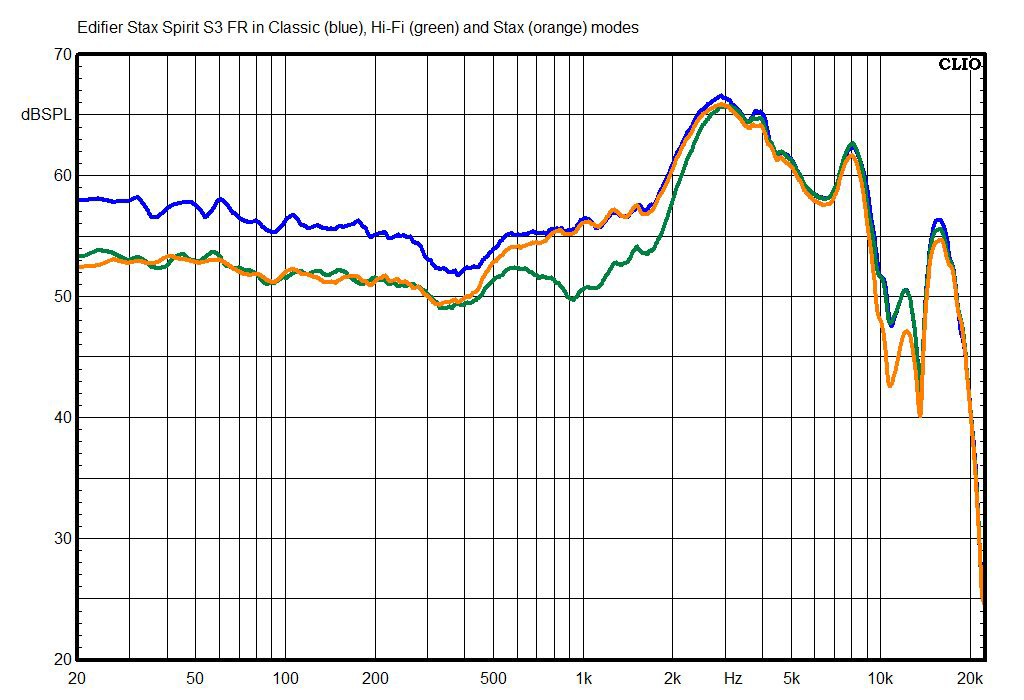 Here I’ve switched to a real-time analyzer display with a white noise signal played from my phone—it’s the only way I could reliably evaluate all the different modes these headphones offer. This chart shows the effect of the different EQ modes in the app. They’re all the same above 3kHz. Classic is bassier, Hi-Fi is treblier, and Stax splits the difference—it has the same bass response as Hi-Fi mode, but adds some extra midrange oomph. These are subtle and sane choices for EQ modes. 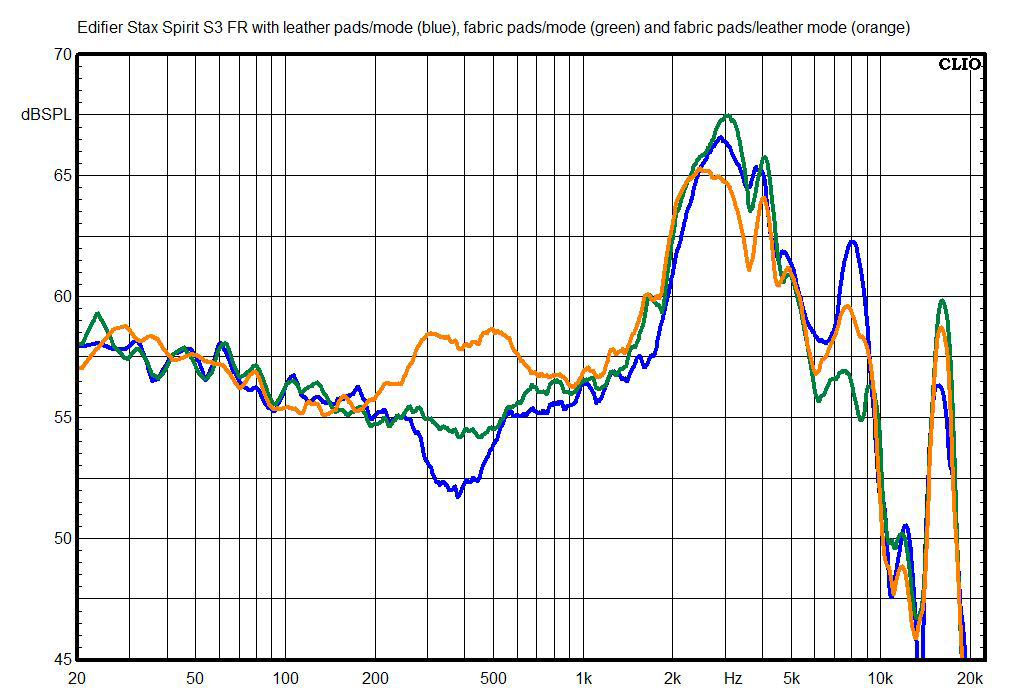 This chart (shown with the Y/dB scale zoomed in for greater clarity) shows the difference in response with the different earpads and earpad compensation modes available in the app. The compensation modes make the two sets of pads similar, except that the leather pads and mode have a few dB extra zip in the mid-treble, between 6 and 9kHz, and a dip in the lower mids centered at 400Hz. My “hack” mode, using the fabric pads with the Leather EQ mode, resulted in less treble output with some extra kick in the midrange, between about 300 and 600Hz. Not what I’d expect I’d like, but trust your ears, as they say. 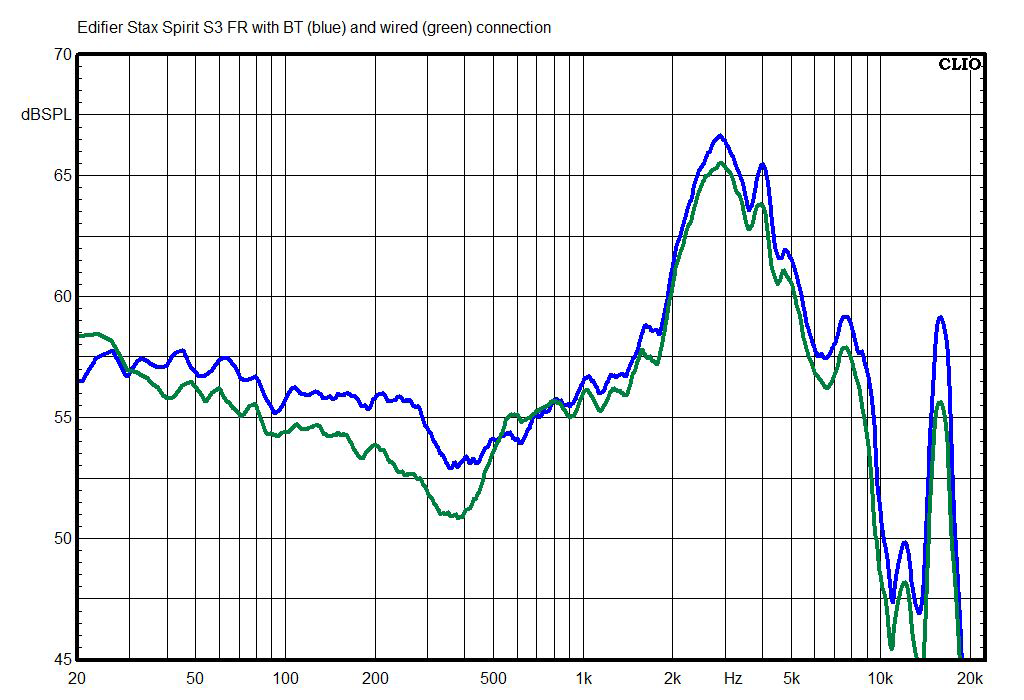 This chart shows the difference in response between the wired and Bluetooth modes, with leather earpads installed and the appropriate mode activated, along with the Classic EQ mode. (I couldn’t line them up perfectly because of the relatively crude volume steps available on the headphones and on my phone.) Although it looks like the bass and treble are boosted with the Bluetooth connection, I think a better way to look at it is that the mids are boosted between about 450Hz and 1kHz with the wired connection. 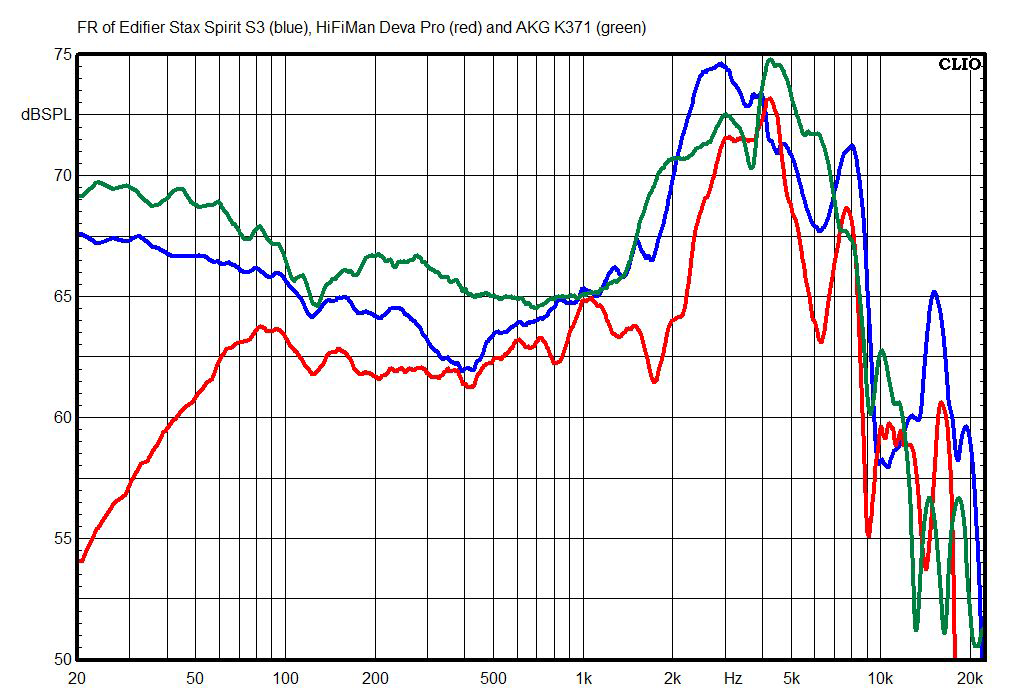 This chart shows the S3s’ response in wired mode compared with the right-on-Harman-curve AKG K371s and the HiFiMan Deva Pros. (This is a little crude because I had to use a real-time analyzer instead of my normal log chirp tones, because results through the Bluetooth connection weren’t as reliable.) Although it’s hard to tell because I normalized the curves at 1kHz (you gotta pick something!), the Deva Pros are the trebliest, the K371s are the bassiest, and the S3s fall somewhere in between. 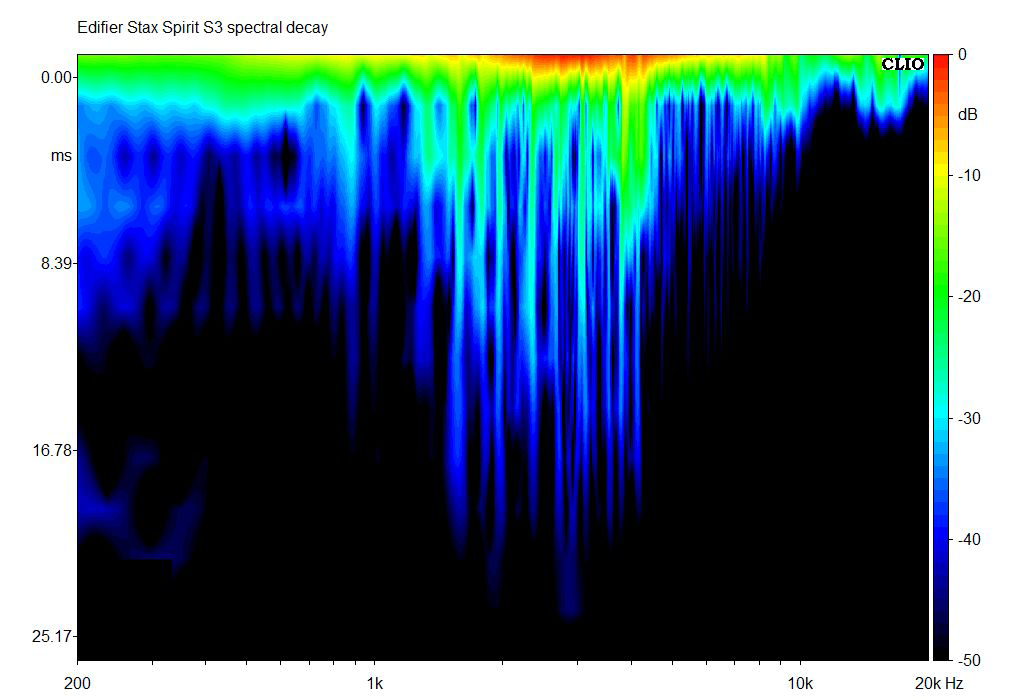 The S3s’ right-channel spectral-decay plot (measured with the wired connection) shows the same kinds of high-Q resonances between about 1.5 and 5kHz that we usually see with planar-magnetic models. In my experience, these don’t add tonal coloration, but may correlate with a more spacious sound. 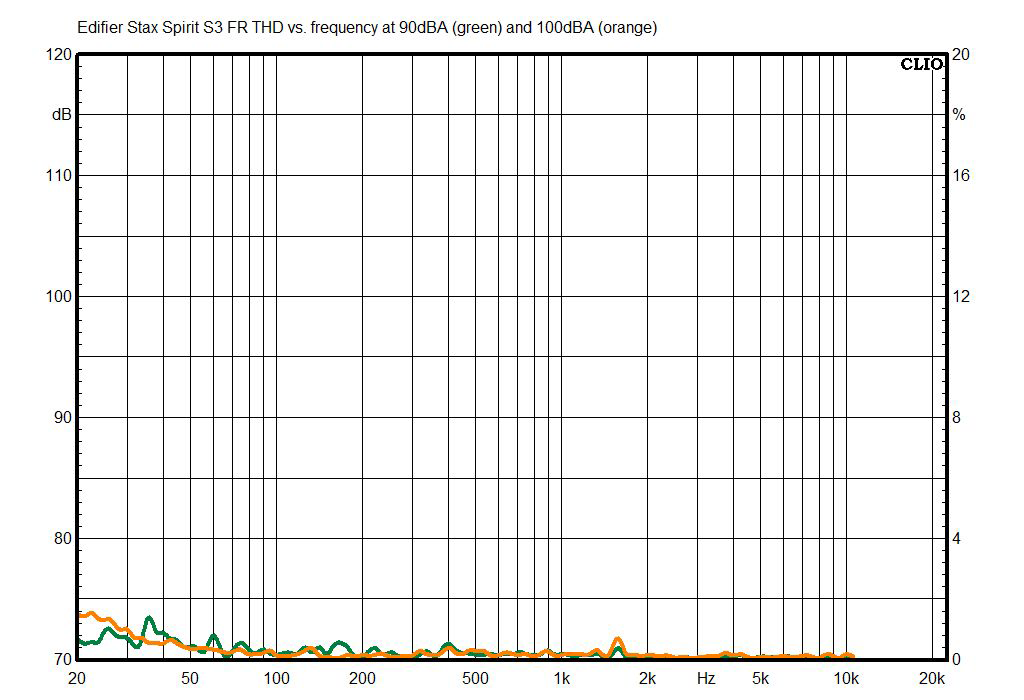 Here’s the THD vs. frequency chart, measured using the wired connection at 90dBA and 100dBA (both levels set with pink noise), although remember that the internal amp is always on. Distortion is very low, as expected from planar-magnetic drivers. 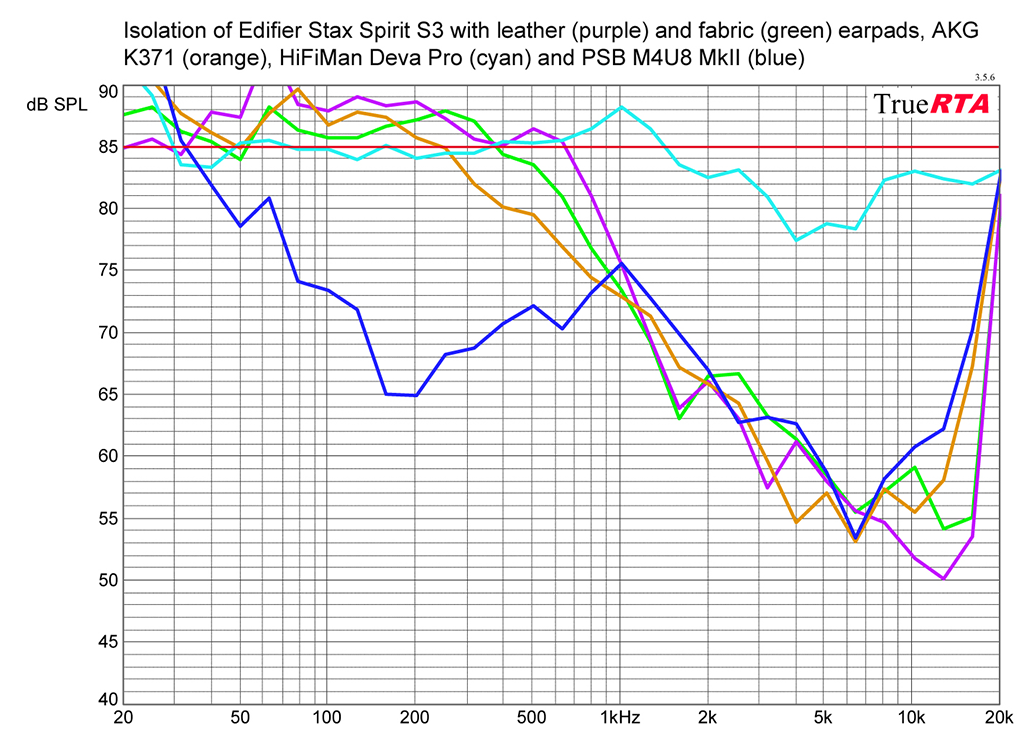 In this chart, the external noise level is 85dB SPL (the red trace), and numbers below that indicate the degree of attenuation of outside sounds. The lower the lines, the better the isolation. The S3s’ noise isolation is very typical for standard-sized, closed-back headphones. I also added the HiFiMan Deva Pros and the PSB M4U 8 MKIIs, so you could see how they compare with open-back and noise-canceling headphones, respectively. 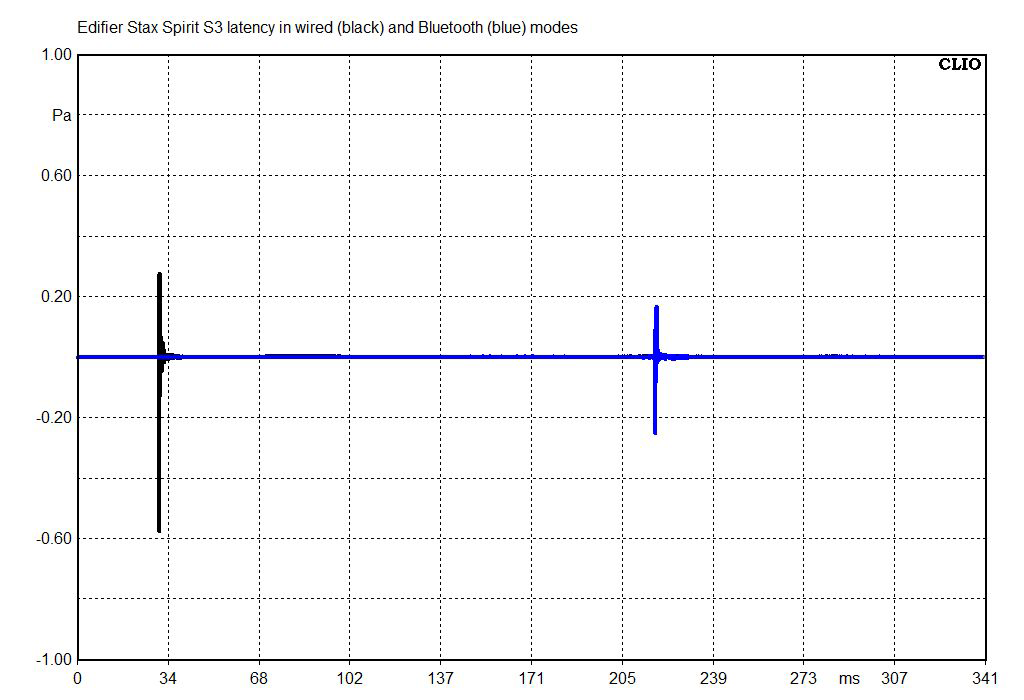 Latency, measured with the MEE Connect transmitter (which has aptX and aptX Low Latency), typically ran about 215ms in Bluetooth mode; I guess the transmitter and the headphones somehow didn’t communicate that they both have aptX Low Latency. Very frustrating, but sadly common; it appears Qualcomm has some work to do here. There’s a bit of latency with the wired connection, too, because of the internal DSP—typically about 28ms. 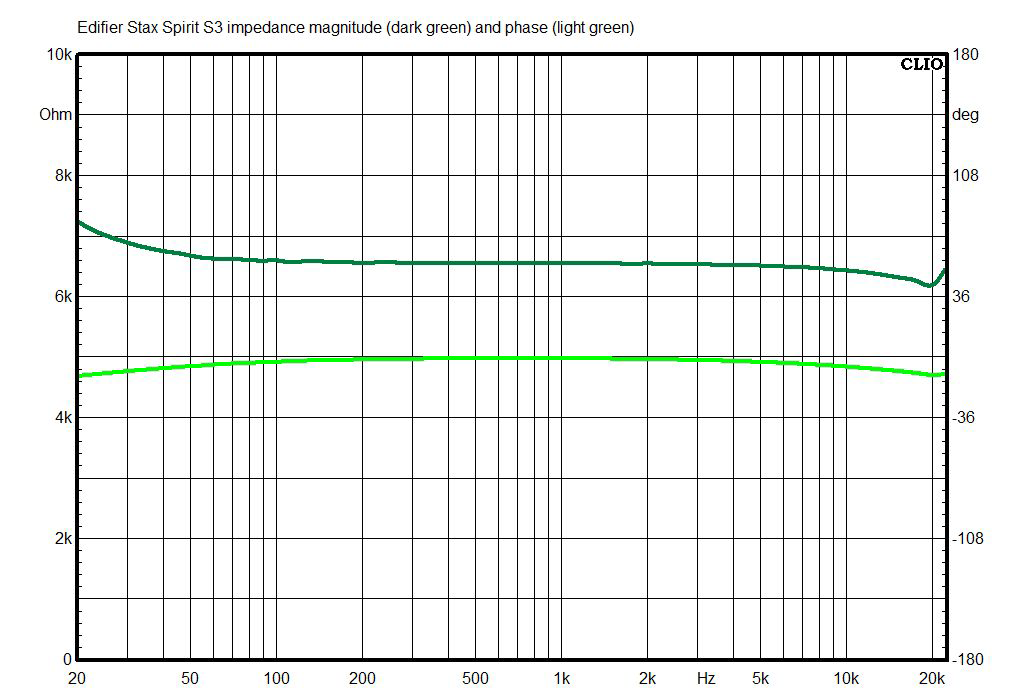 The impedance magnitude, measured in wired mode but with the amp active (the headphones don’t work otherwise), runs about 6.6k ohms, as is the case with most active headphones with an analog input. It won’t be sensitive to the output impedance of the source device.