I measured the Etymotic Evo earphones using laboratory-grade equipment: a GRAS Model 43AG ear/cheek simulator/RA0402 ear simulator with KB5000/KB5001 simulated pinnae, and an Audiomatica Clio 12 audio analyzer. For isolation measurements, I used a laptop computer running TrueRTA software with an M-Audio MobilePre USB audio interface. The headphones were amplified using a Musical Fidelity V-CAN amplifier. I used the supplied medium-sized double-flange silicone tips for all measurements because they fit best in the ear simulator. These are “flat” measurements; no diffuse-field or free-field compensation curve was employed. If you’d like to learn more about what our measurements mean, click here. 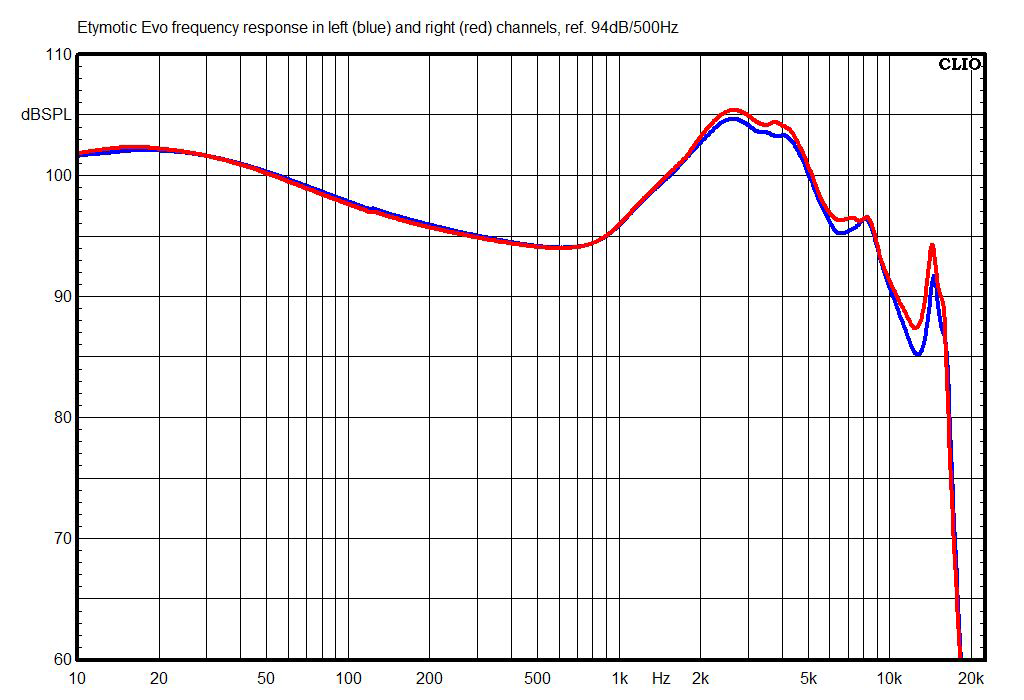 This chart shows the Evos’ frequency response. The basic shape of the curve looks pretty normal; what’s unusual is the amount of overall treble energy. What we see here is a large-magnitude, broadband peak covering about 2 1/2 octaves of the upper mids and lower treble; what we’d more commonly see is something like a lower-magnitude, octave-wide peak centered at about 2.5kHz, and another, smaller peak centered at about 5 or 6kHz. The good news is that the response is smooth overall, which is why I didn’t hear any colorations other than the trebly tonal-balance tilt. 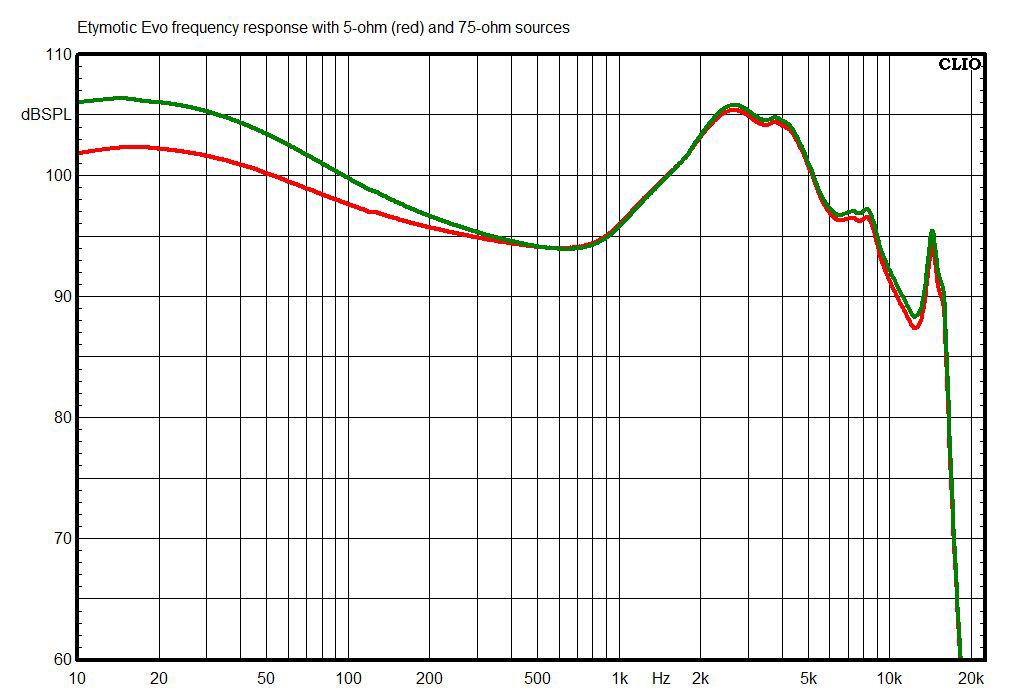 This chart shows how the Evos’ tonal balance changes when they’re used with a high-impedance source, such as a cheap laptop, some tube amps, or some professional headphone amps. It’s a pretty big difference: a boost of 2 to 4dB below about 150Hz—although based on my listening notes, I expect I’d like the sound better that way. 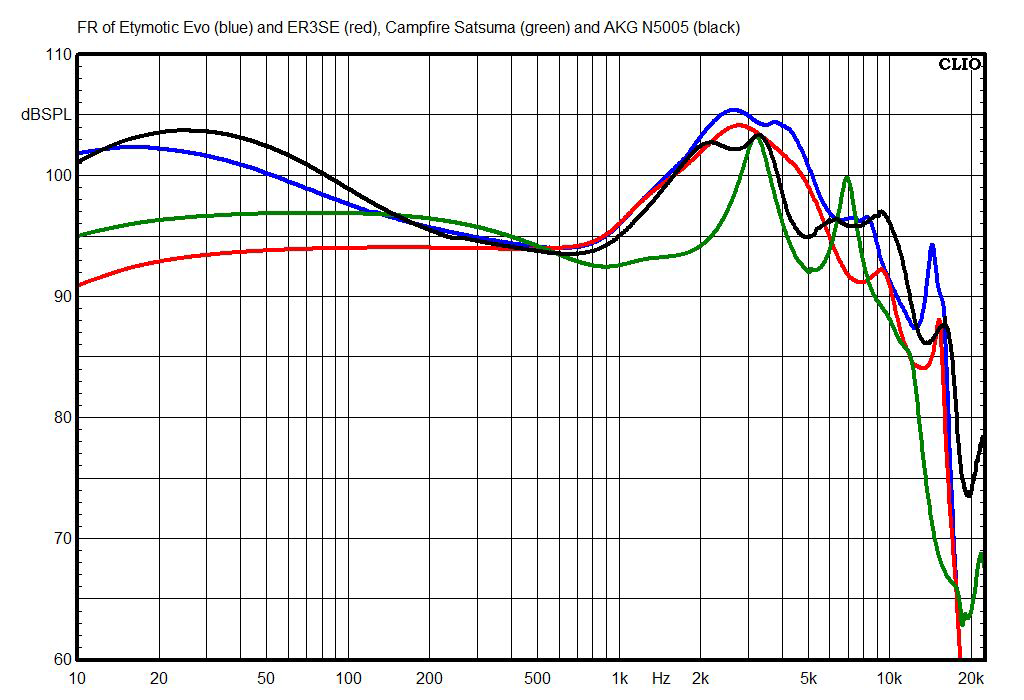 This chart shows the Evos’ right-channel response compared with the Etymotic ER3SE (a single-driver design tuned for a fuller response than most Etymotic models), Campfire Satsuma (a single-driver balanced-armature design), and AKG N5005 earphones, which are said to be the passive earphones that come closest to the Harman curve. The Evos definitely have a lot more bass than the ER3SEs—but they also have a lot more treble energy than the other earphones. But if you brought the bass up about 2dB and the treble down about 3dB, you’d have a response pretty close to that of the Harmon curve—good news for those who like to EQ their earphones. 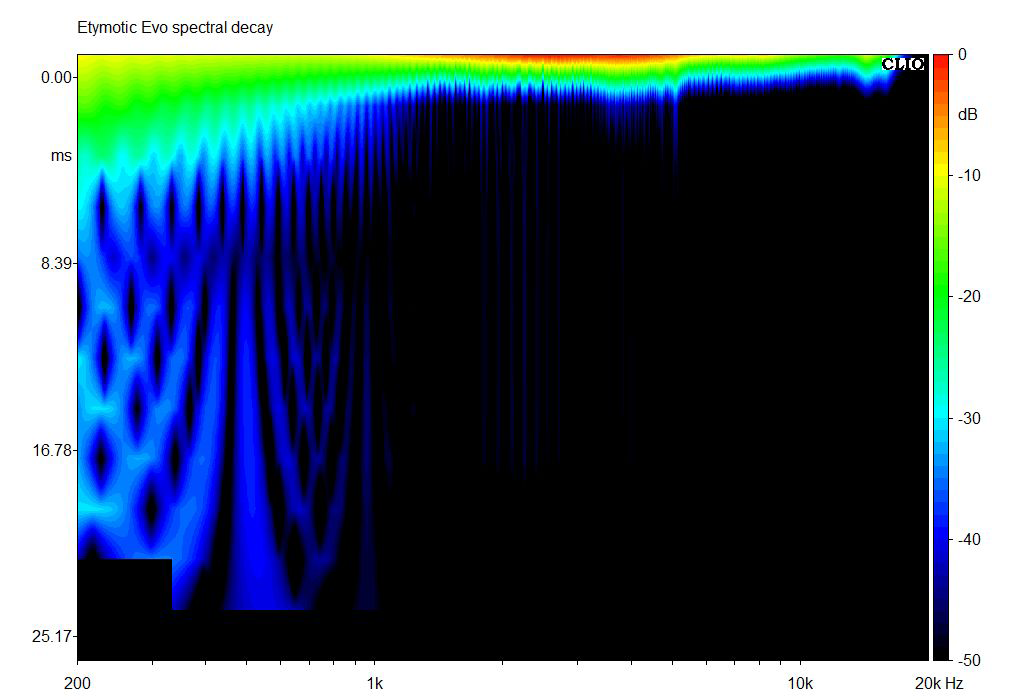 The Evos’ spectral-decay plot looks clean, although there seems to be a bit of resonance sneaking up from the bass region. 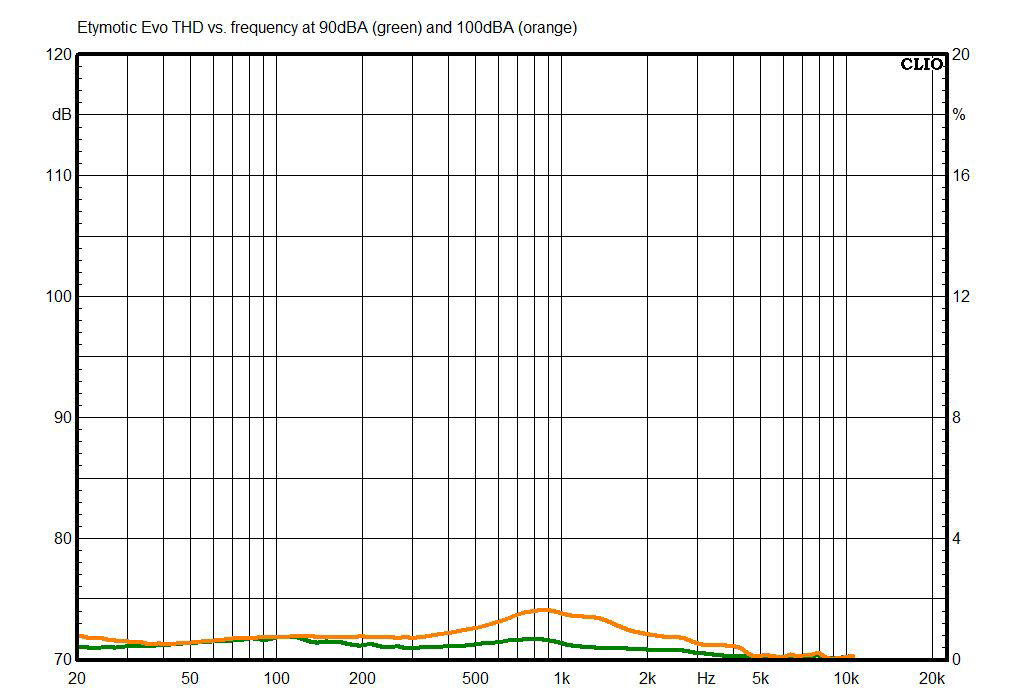 At extreme crank, the Evos show a little bit of distortion in the midrange, but still, it’s below 2%, and with transducers, that level of distortion is unlikely to be audible. 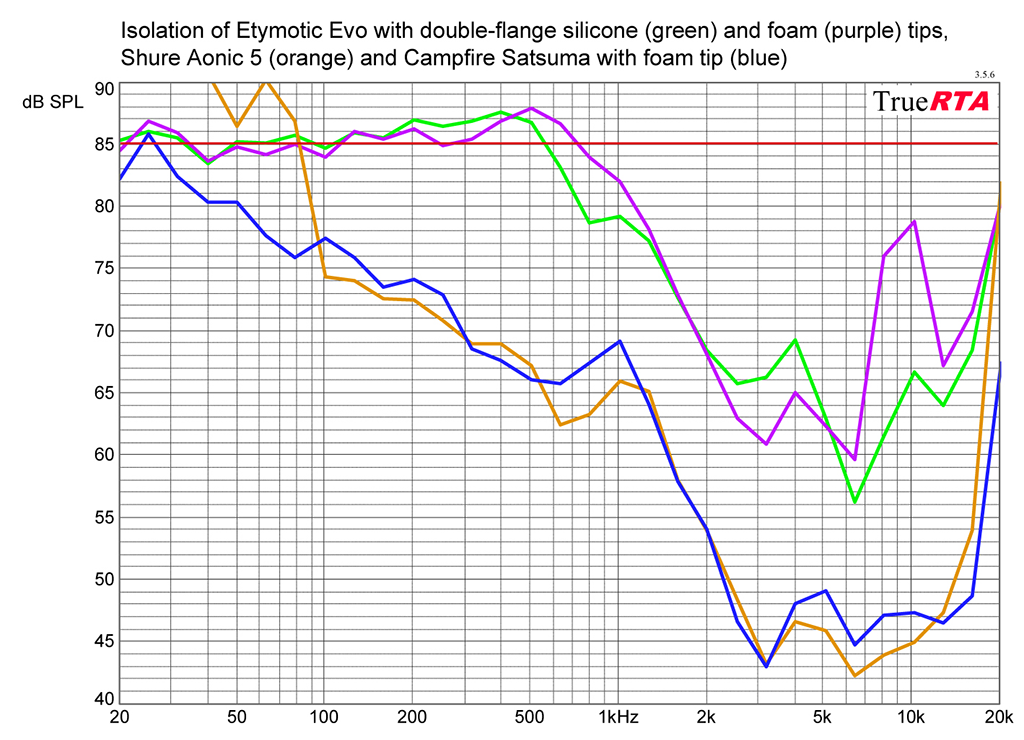 In this chart, the external noise level is 85dB SPL, and numbers below that indicate the degree of attenuation of outside sounds. The lower the lines, the better the isolation. It’s clear that the Evos don’t isolate as well as somewhat similar designs like the Shure Aonic 5 and Campfire Satsuma earphones, and I’m sure that’s because the long sound tubes don’t allow the earphones to nestle securely into the pinnae; the fact that the bodies of the earpieces fill so much of the ears is what gives other earphones of similar design such excellent isolation. 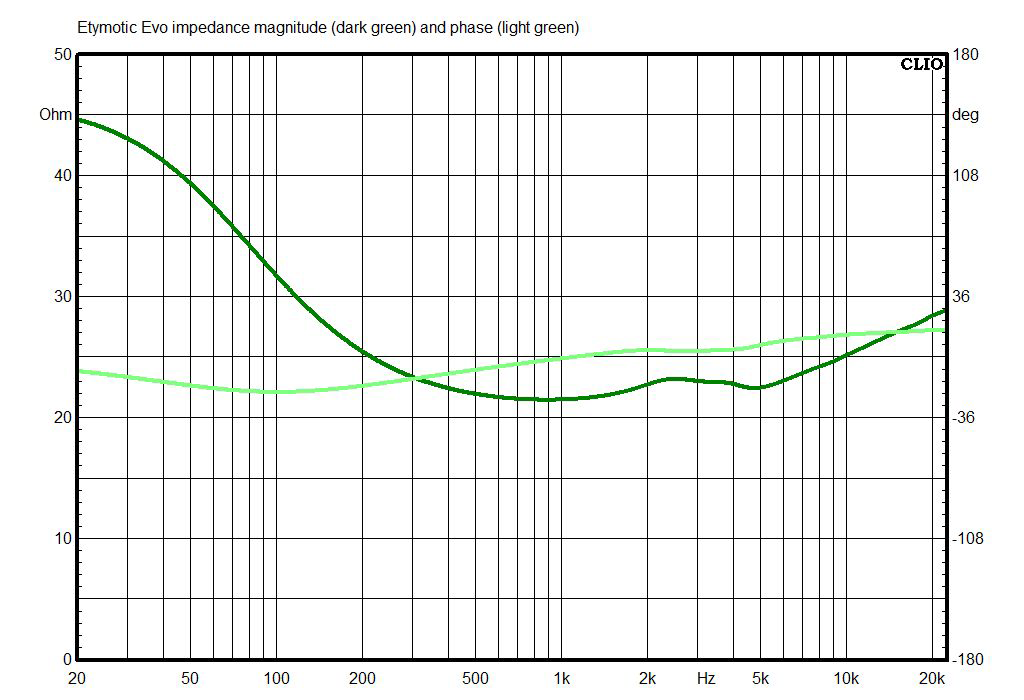 Normally with balanced armatures, we can expect to see a sharp rise in impedance above about 2kHz, but with the Evos, there’s instead a big upswing in the bass. This is why we see such a large change in frequency response when the earphones are used with high-impedance sources. Phase is pretty flat, though.

Sensitivity, measured between 300Hz and 3kHz, using a 1mW signal calculated for 47 ohms rated impedance, is 106.4dB. That’s pretty high, so you won’t have any problem getting loud volume from the Evos no matter what source device you use.

Bottom line: These are definitely going to be trebly sounding earphones, and they’re unlikely to offer the kind of isolation you can get with most other earphones using over-the-ear cable routing, but from a purely engineering standpoint, the measurements show nothing to be concerned about.