I measured the Monoprice Monolith M1570 headphones using laboratory-grade equipment: a G.R.A.S. Model 43AG ear/cheek simulator/RA0402 ear simulator with KB5000/KB5001 simulated pinnae, and a Clio 10 FW audio analyzer. For isolation measurements, I used a laptop computer running TrueRTA software with an M-Audio MobilePre USB audio interface. The headphones were amplified using a Musical Fidelity V-CAN, with an Audio-gd NFB1-AMP used for distortion measurements. Except as noted, these measurements were made with the supplied lambskin earpads. These are “flat” measurements; no diffuse-field or free-field compensation curve was employed. If you’d like to learn more about what our measurements mean, click here. 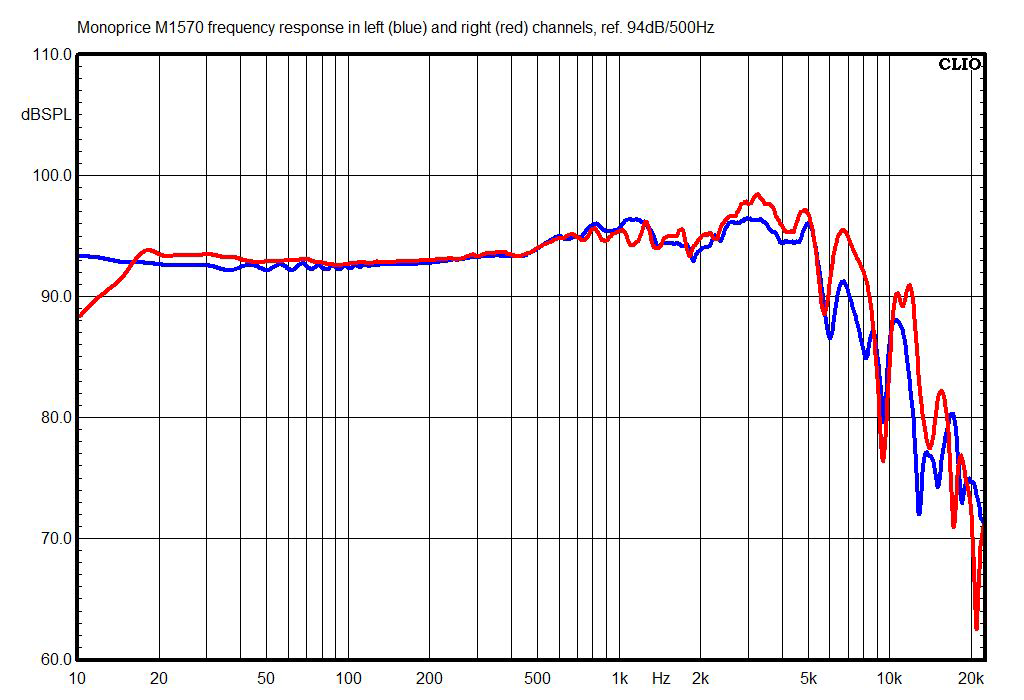 The above chart shows the M1570s’ frequency response. The flat response below 1kHz is typical for large planar-magnetic headphones, but the largely flat response above 1kHz isn’t. The peak at 3kHz is only about +4dB, where we might normally see something like +10dB. 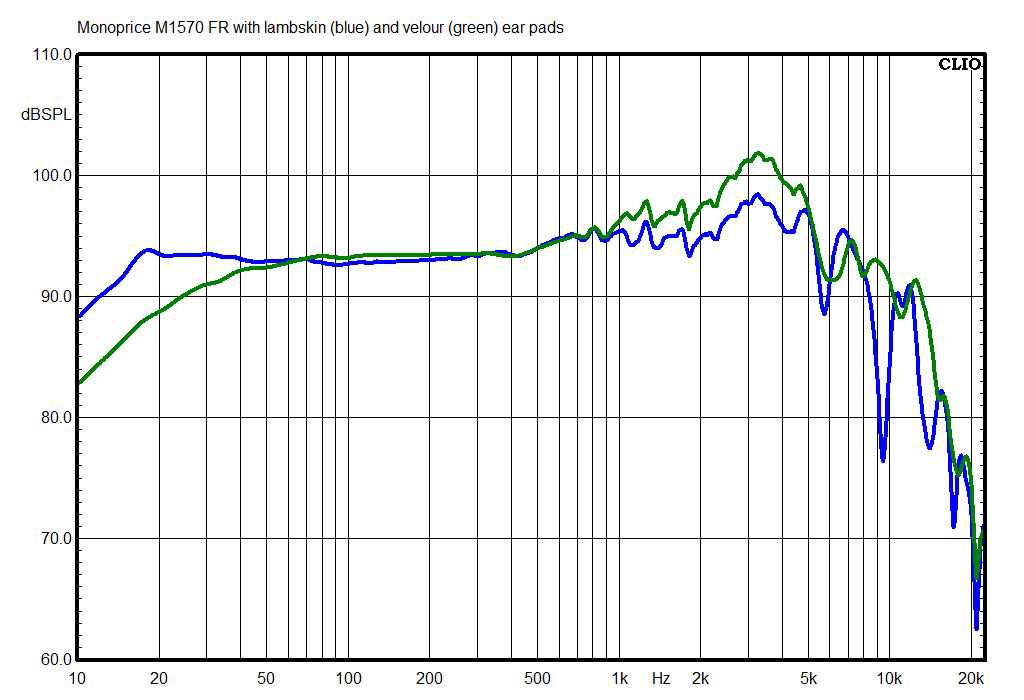 This measurement reveals the difference in frequency response with the lambskin and velour pads. As I found in my listening, the character of the headphones remains largely the same no matter which pads are used; the difference is that with the velour pads there’s a little more treble and a bit less bass. 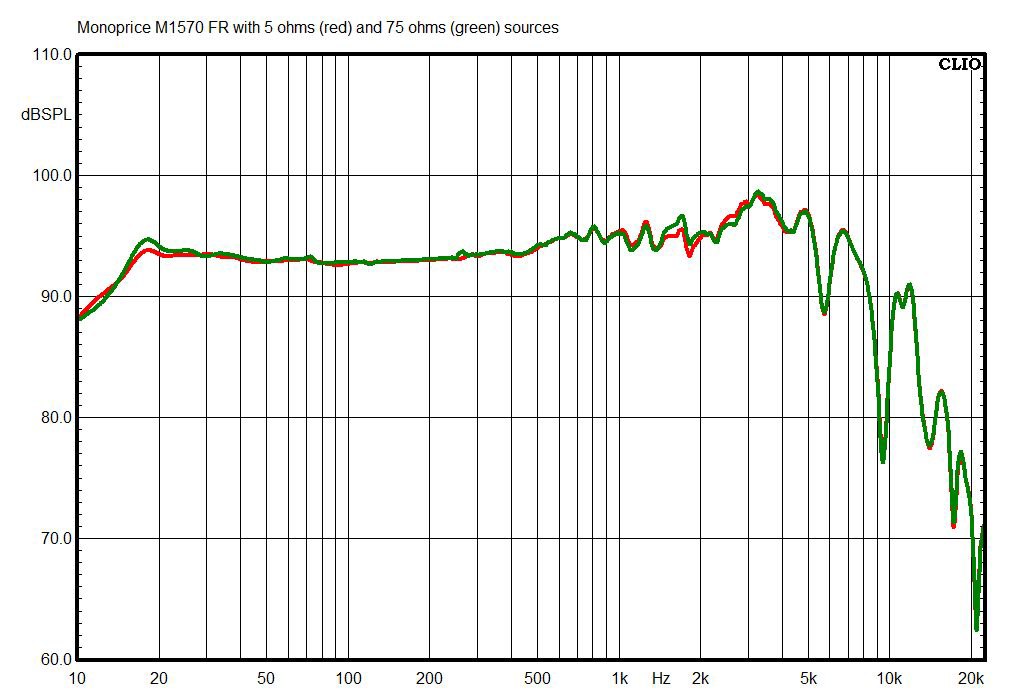 This chart shows how the M1570s’ tonal balance changes when they’re used with a high-impedance (75 ohms) source, such as a cheap laptop or some cheap professional headphone amps, or some exotic tube amps. There’s no significant difference, indicating that the tonal balance of the headphones won’t change when you switch source devices (unless one of those source devices a has non-flat response). 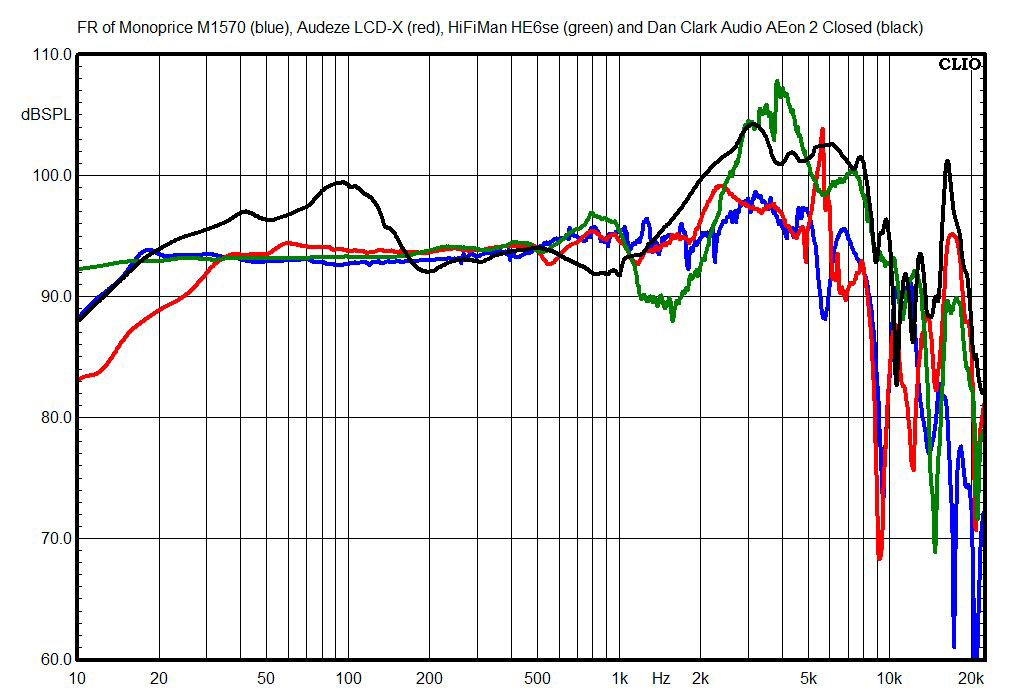 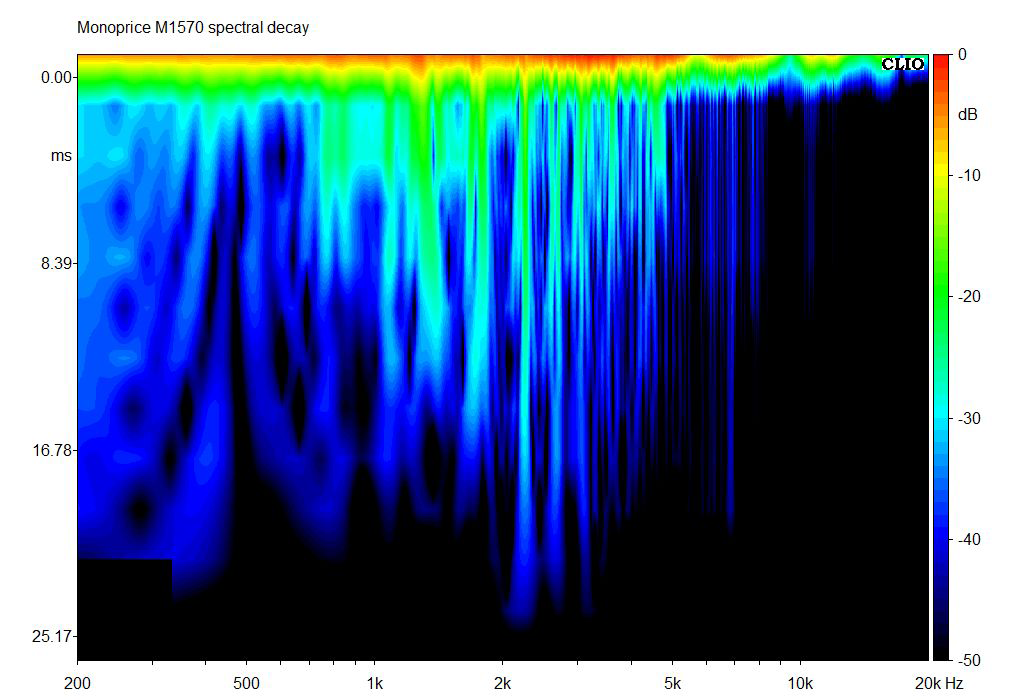 It’s common to see many high-Q (narrow) resonances between about 2 and 6kHz with planar-magnetic headphones; these appear to be due to reflections between the large, flat planar driver and the flat cheek plate of the G.R.A.S. Model 43AG ear/cheek simulator. What’s unusual here is that the reflections/resonances extend to lower frequencies than I’m used to seeing (down to about 750Hz), and they’re stronger than usual, some hanging in there at -20dB for more than 10ms. I am still not sure if or how this affects subjective performance -- that’s something I really need to dig into. 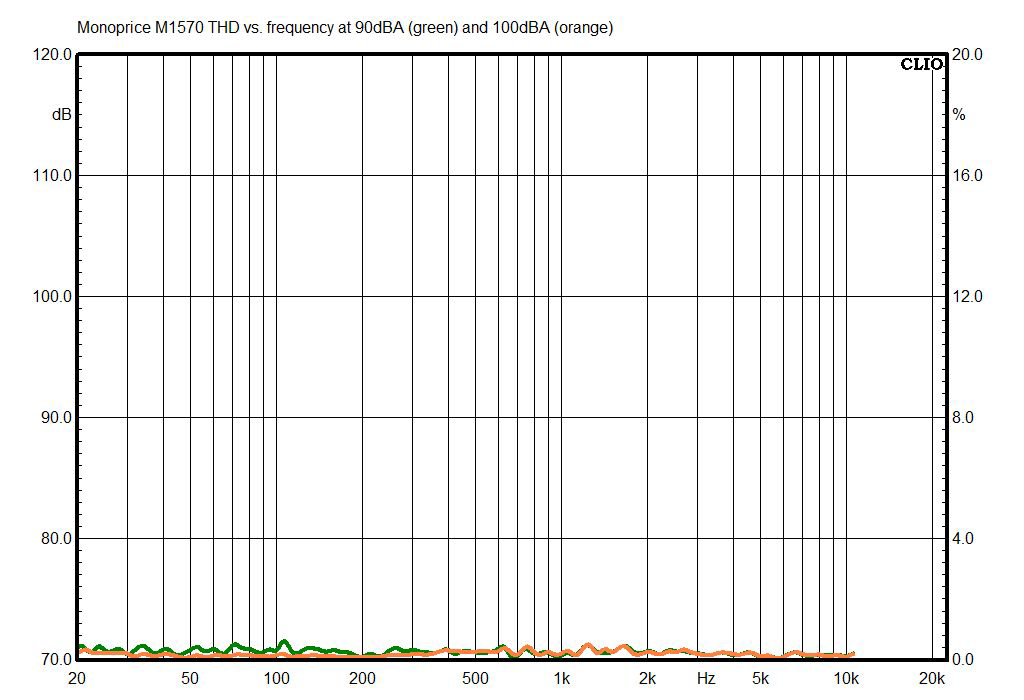 As is often the case with planar-magnetic headphones, the total harmonic distortion of the M1570s is inaudible even at extremely loud levels. 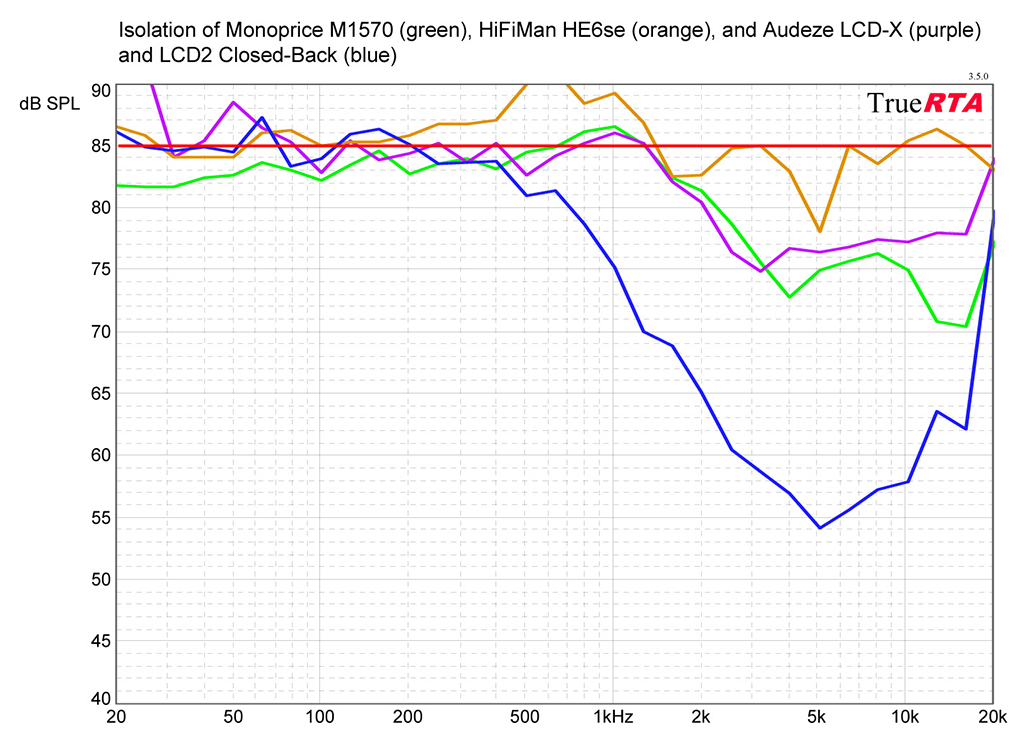 In this chart, the external noise level is 85dB SPL, and numbers below that indicate the degree of attenuation of outside sounds. The lower the lines, the better the isolation. The isolation of the M1570s is comparable to that of competing open-back models. I added the Audeze LCD2 Closed-Back headphones so you could see how a closed-back planar-magnetic design fares in this test. 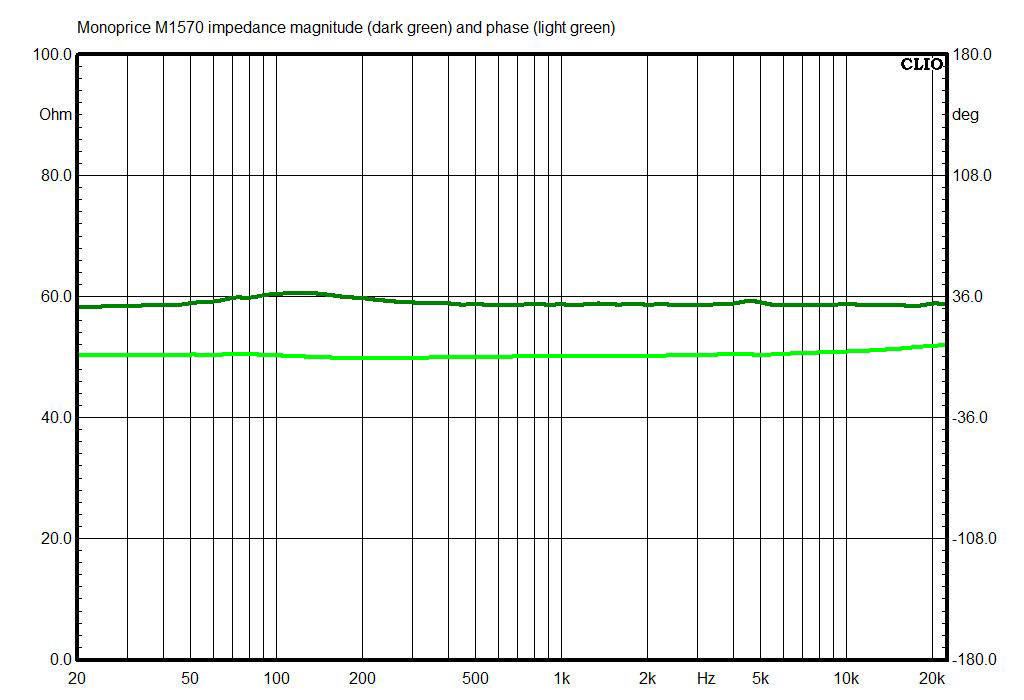 The impedance magnitude of the M1570s is basically flat at about 58 ohms, and the phase response is very flat.

Sensitivity of the M1570 headphones, measured between 300Hz and 3kHz, using a 1mW signal calculated for 60 ohms rated impedance, is 101.1dB, much higher than the rated 96dB. No wonder they sound pretty good plugged straight into a smartphone.