I measured the Beyerdynamic Lagoon ANC headphones using a G.R.A.S. Model 43AG ear/cheek simulator/RA0402 ear simulator with the KB5000 and KB5001 anthropomorphic simulated pinnae, a Clio 10 FW audio analyzer, a laptop computer running TrueRTA software with an M-Audio MobilePre USB audio interface, and a Musical Fidelity V-CAN amp. For measurements in Bluetooth mode, I used a MEE Audio Connect Bluetooth transmitter to get the signal to the headphones. These are “flat” measurements; no diffuse-field or free-field compensation curve was employed. 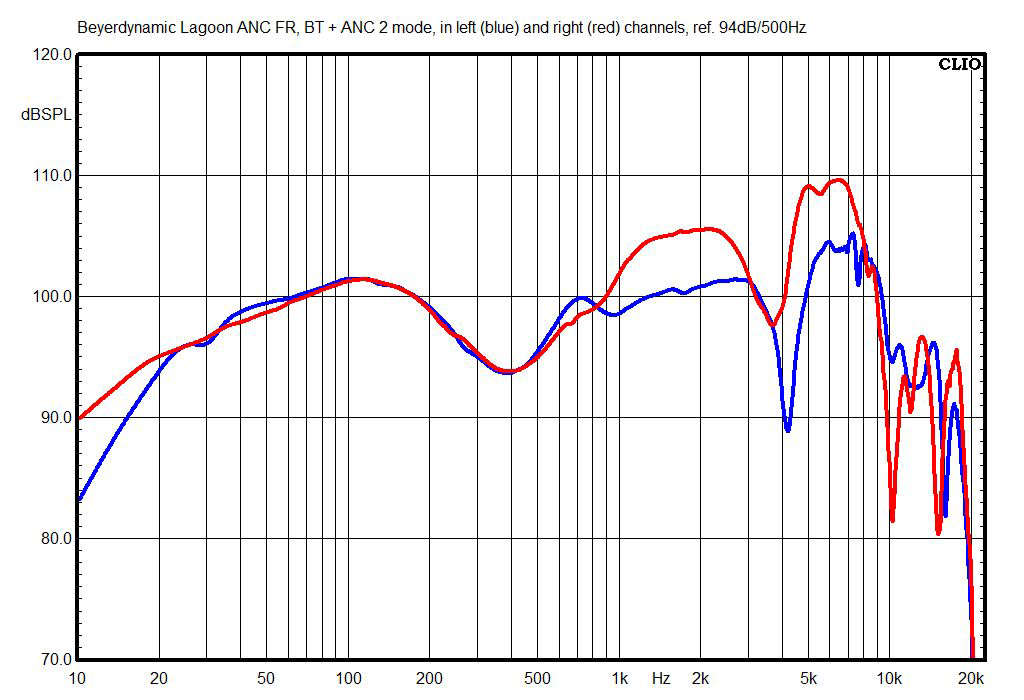 The above chart shows the Lagoon ANCs’ frequency response measured in what I expect will be the headphones’ most-used mode: Bluetooth and noise canceling in ANC 2 mode. This curve is unusual in a few ways. First is the channel mismatch, which varied a lot with different positionings of the headphones on the ear/cheek simulator, and to some extent with the different usage modes, but remained pretty consistent throughout my measurement session (and wasn’t seen in the other headphones I measured in the same session). Second is the very broad peak centered at 2kHz in the right channel; it’s common to see a peak like this, but usually it’s only about an octave wide, rather than about 3.5 octaves wide as seen here. Third is that the high-frequency peak, in this case between 5 and 7kHz, is higher in magnitude than the 2kHz peak; usually it’s the reverse. 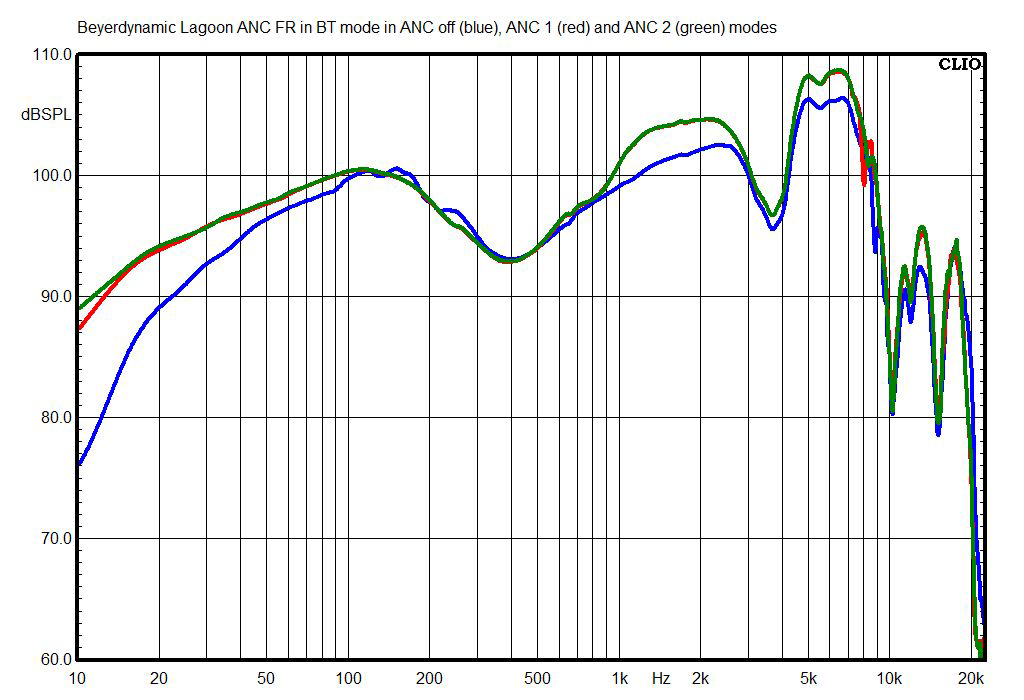 This chart shows how the noise canceling affects the response of the Lagoon ANCs. The response is the same in both ANC modes, and while the sound with ANC off is definitely different (and flatter in response), the character of the sound should remain quite similar. We often see much larger differences on this measurement. 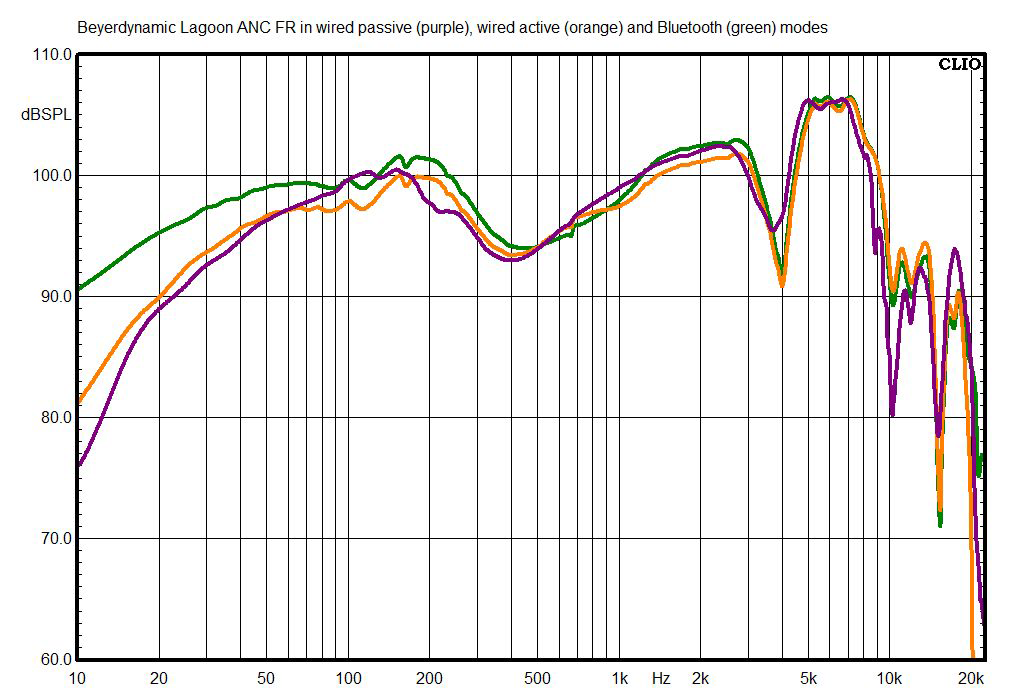 This chart compares the response with the Lagoon ANCs in three modes with ANC off: wired passive (power off), wired active (power on), and Bluetooth. There are slight differences, but overall, the sound character remains largely the same in all modes. 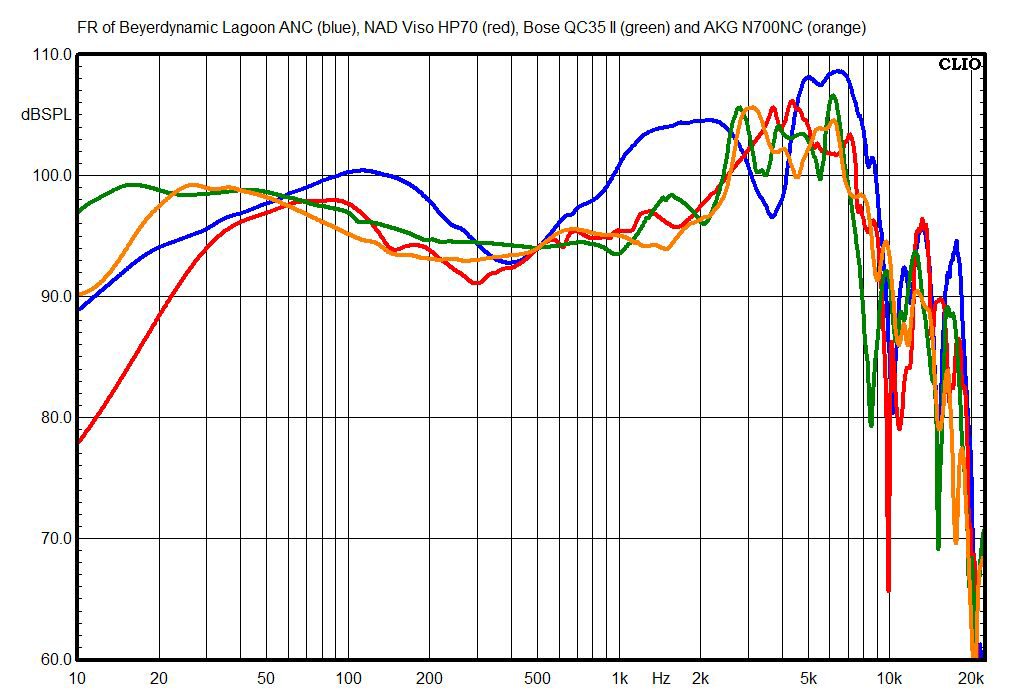 This graph confirms what I noted above. The AKG, Bose, and NAD noise-canceling Bluetooth headphones shown here have a remarkably similar frequency response, and the Lagoon ANCs are a clear outlier. Of course, the Lagoon ANCs’ equalization app may bring them closer to the other headphones’ response. 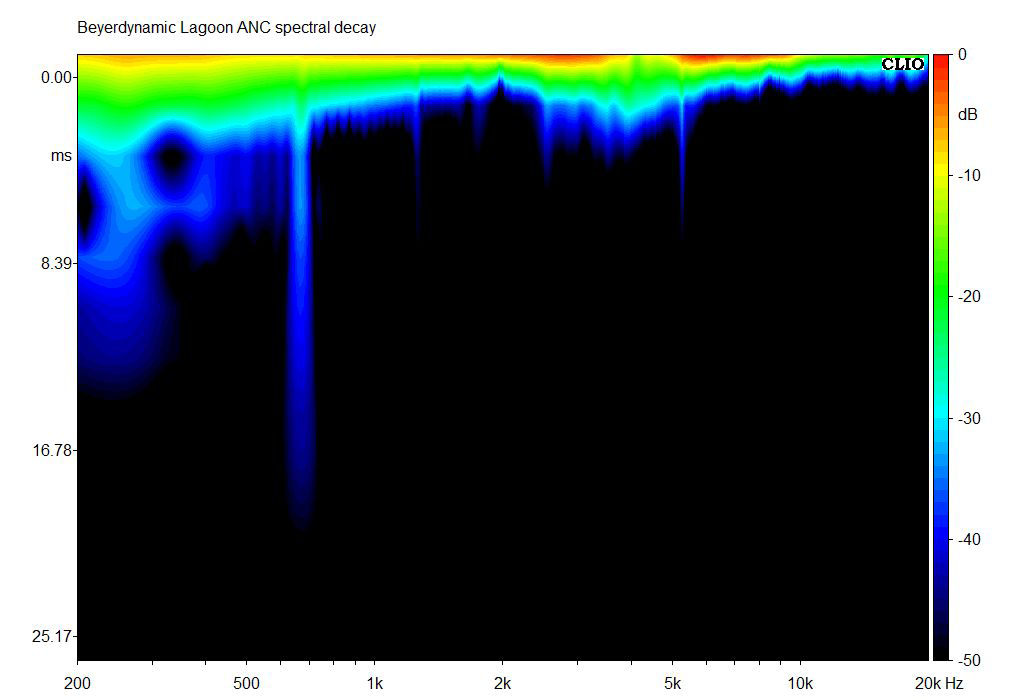 The Lagoon ANCs’ spectral decay (waterfall) chart -- measured with a wired connection because of Bluetooth’s latency -- shows a distinct resonance at about 650Hz. But the Q of the resonance is extremely high (i.e., its bandwidth is narrow), and it’s down to -30dB within just a few milliseconds, so I doubt it’d be audible. 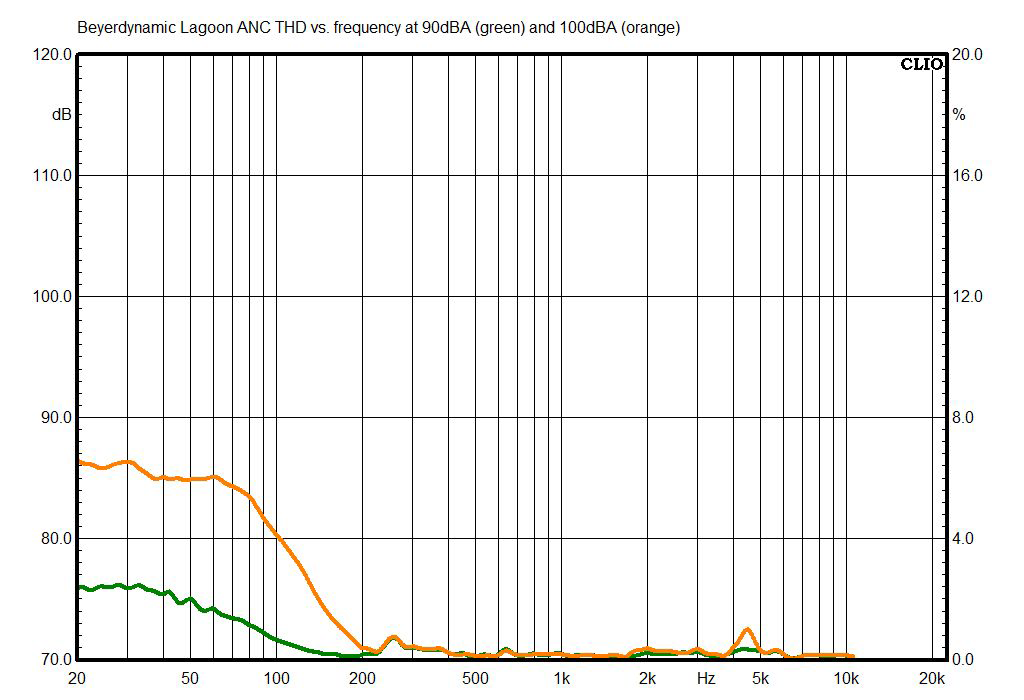 The Lagoon ANCs’ distortion is measured here with a wired connection; the internal amps of the headphones may add some distortion, but my analyzer can’t compensate for Bluetooth’s latency when doing distortion measurements. The distortion in the bass, below about 180Hz, is somewhat on the high side. At 90dBA it’s about 2%, which is unlikely to be audible, but it’s about 6% in the bass, which would probably be audible -- although 100dBA is louder than almost anyone really wants to (or should) listen for long. 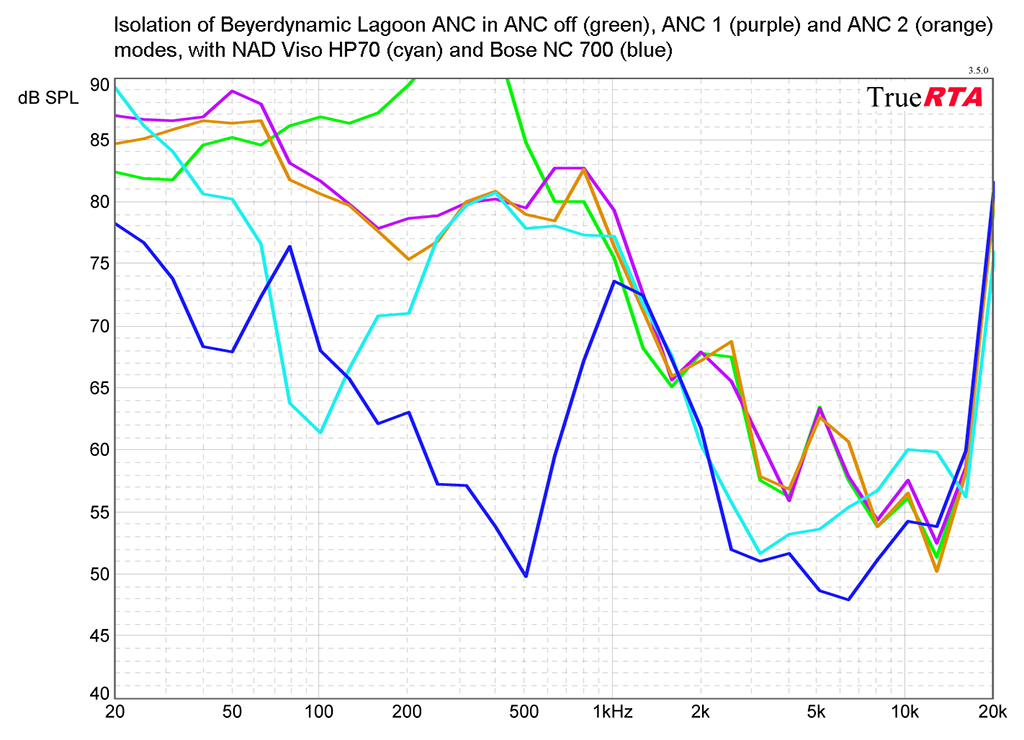 In this chart, the external noise level is 85dB SPL, and numbers below that indicate the degree of attenuation of outside sounds. According to my measurements (and my ears), the Lagoon ANCs’ isolation is modest in the “airplane band” between about 100Hz and 1kHz, reducing noise by an average of about 5dB in ANC 1 and maybe 6dB in ANC 2. You’ll hear some noise canceling, but nothing like the near-silence that you hear from Bose models and the later Sonys. 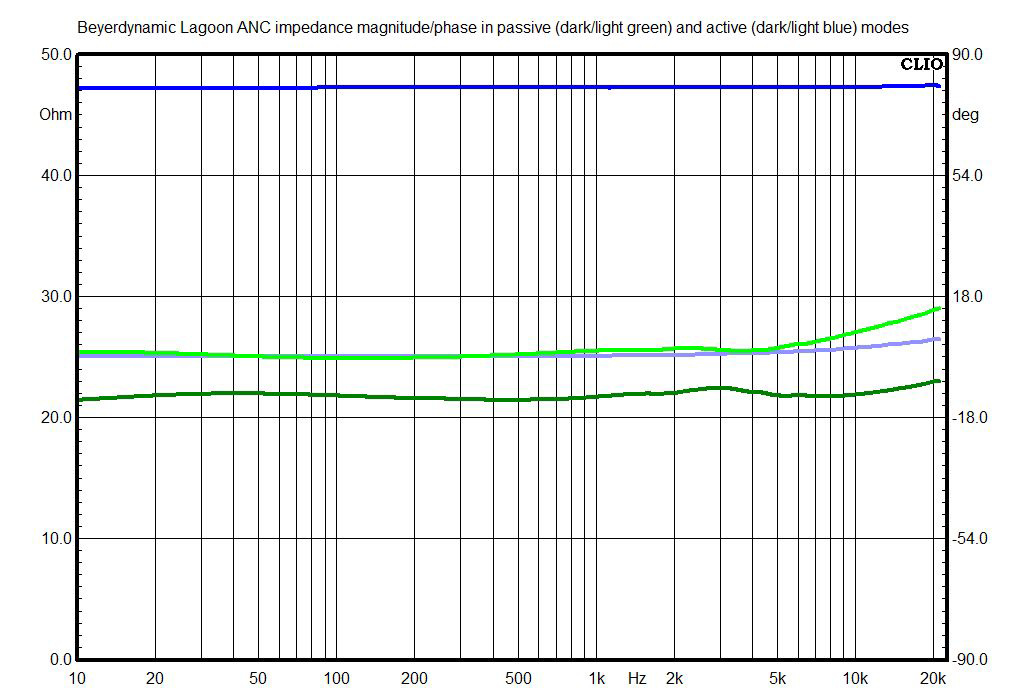 Bluetooth latency of the Lagoon ANCs used with the MEE Audio Connect transmitter (which, like the Lagoon ANCs, is equipped with the aptX Low Latency codec) was 36ms, which is typical for headphones using aptX LL. Thus, you will not experience lip sync problems using them for video or gaming. Sensitivity of the Lagoon ANCs with a wired connection with ANC off, measured between 300Hz and 3kHz using a 1mW signal calculated for the rated 32-ohms impedance, is 99.9dB in passive mode and 97.2dB in active mode. So if you have to use a wired connection, they should play fairly loud.